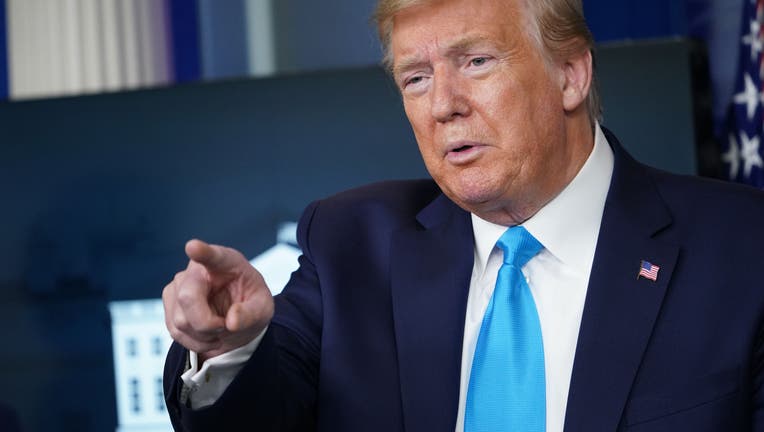 US President Donald Trump speaks during the daily briefing on the novel coronavirus, COVID-19, in the Brady Briefing Room at the White House on April 7, 2020, in Washington, DC. (Photo by Mandel NGAN / AFP) (Photo by MANDEL NGAN/AFP via Getty Images)

WASHINGTON - Democrats are wrestling over how best to assail President Donald Trump for his handling of the coronavirus pandemic and the economy’s shutdown, even as the country lurches into an unpredictable campaign season during its most devastating crisis in decades.

Trump has provided Democrats with plenty of political fodder, including leading a slow-footed federal response to an outbreak that has caused profound economic, health and social disruption. Democrats are already using reams of video of Trump denying and playing down a crisis now killing hundreds of Americans daily, erasing millions of jobs and closing countless businesses.

Yet seven months from Election Day, Democrats have not matched the attention Trump can command with daily, nationally televised briefings that can exceed two hours.

And they’re juggling conflicting instincts: attack Trump aggressively now and risk accusations of using a catastrophe for political reasons, or wait until society starts returning to normal. That might give him time to define himself as a wartime president battling a virus that’s enveloped the globe.

“There has been gross incompetence” by Trump and that’s “a huge vulnerability,” said Jim Margolis, a leading Democratic communications consultant. “But Democrats must take care not to gratuitously attack the administration or look like they are playing politics with a crisis.”

Both approaches — strike vigorously now or later — are being tested in real time.

“Trump keeps saying he’s a wartime president. Well, start to act like one,” Biden has said. His path to the nomination cleared Wednesday when his only viable rival, Sen. Bernie Sanders, I-Vt., dropped out.

They’ve also presented themselves as calming alternatives to Trump, whose briefings have been marred by false and confusing assertions that often contradict public health professionals‘ views and angry outbursts at reporters whose questions he dislikes.

“This moment is exactly wrong for President Trump because he can’t distract people from a pandemic with a provocative tweet,” said Sen. Brian Schatz, D-Hawaii.

Yet at the same time, Democratic political groups are spending millions on television and online ads around the country that pull few punches.

“Crisis comes to every president. This one failed,” says one spot by Unite the Country, a political committee backing Biden. As red circles dotting a U.S. map ominously expand, the announcer says Trump “let the virus spread unchecked across America.”

“Perception can get baked in very quickly,” said Tara McGowan, who leads PACRONYM, an anti-Trump political committee. “You simply can’t afford to wait.”

The array of voices delivering Democrats' messages has reflected the party's lack of an undisputed leader before Biden formally clinches the nomination.

“It’s really going to have to be an all hands on deck approach,” said Guy Cecil, who heads Priorities USA, the largest Democratic outside political group.

Democrats' efforts to enter the spotlight have been complicated by the nation’s lockdown, which has prevented public rallies and interactions with voters that are normally the lifeblood of politics.

Republicans say Democratic attacks now would be ineffective, with voters concentrating on keeping their families safe. “People are hungering for official information as opposed to a partisan response,” said GOP pollster Patrick Ruffini.

“If this is a war, it’s hard to spin a war,” said long-time GOP consultant Stuart Stevens, a Trump opponent. “There are body counts. And what are you going to do with these unemployment numbers?”

After a slow start that concerned many Democrats, Biden has asserted a more visible role with television interviews, virtual town halls, podcasts and newspaper columns that describe his prescriptions for a recovery, such as accelerated aid for the jobless and small businesses.

Biden aides said his approach balances holding Trump accountable while making specific policy recommendations. They said it also lets him display the empathy that’s been part of his public persona ever since his wife and daughter were killed in an auto accident shortly after his 1972 election to the Senate.

Still, Democrats’ quandary over finding a messaging balance has fueled countless conversations within the party. More than 100 groups, from the AFL-CIO to Public Citizen, hold thrice-weekly conference calls to share research and strategy, said Leslie Dach, who runs the Protect Our Care Coalition, which hosts the calls along with the Center for American Progress.

“It’s a moment to double down, but we have to do that in a surgical way, not a jackhammer on his head,” said Bradley Beychok, president of American Bridge.

For most people, the new coronavirus causes mild or moderate symptoms, such as fever and cough that clear up in two to three weeks. For some, especially older adults and people with existing health problems, it can cause more severe illness, including pneumonia, and death