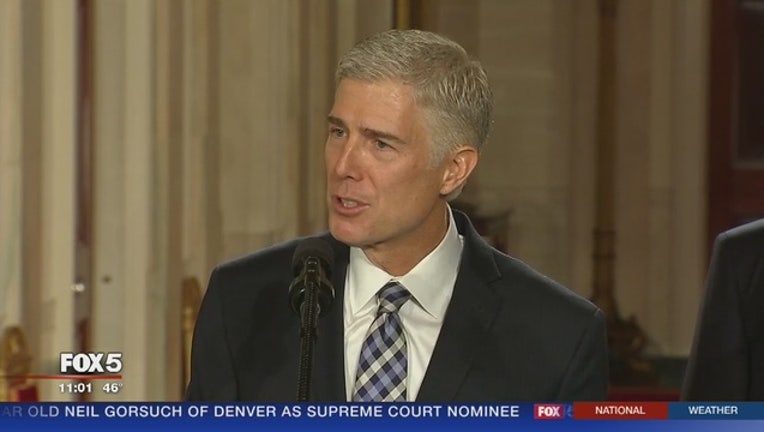 WASHINGTON (AP) - The Latest on the nomination of Judge Neil Gorsuch to the Supreme Court (all times local):

Senate Democrats now have enough votes to try to block Supreme Court nominee Neil Gorsuch with a filibuster, setting up a showdown with Republicans who plan to confirm him anyway.

The crucial 41st vote came from Democratic Sen. Chris Coons of Delaware who announced his decision Monday as the Senate Judiciary Committee met to vote on Gorsuch's nomination.

Coons said that he had decided to oppose President Donald Trump's nominee over concerns that include his vague answers in his hearing.

Coons' opposition will prevent Republicans from reaching the 60 votes they need to move Gorsuch over procedural hurdles to a final Senate vote. Determined to confirm him despite Democratic objections, they will likely change Senate rules later this week to reduce the threshold from 60 to a simple majority.

Senator Michael Bennet says he will not join Democratic efforts to block a full-Senate vote on the nomination of Judge Neil Gorsuch to the Supreme Court.

The Colorado Democrat has been under pressure to support Gorsuch in part because the nominee is also from Colorado. Bennet doesn't say whether he will ultimately vote in favor of Gorsuch. But he says he will not try to block a vote.

If Democrats successfully block a vote on Gorsuch, Senate Republicans are threatening to change Senate rules to enable them to confirm a Supreme Court nominee with a simple majority of 51 votes.

Under current rules, the need 60 votes to end debate.

Senator Lindsay Graham says flatly that Republicans will change the Senate's rules if Democrats use a filibuster to block the nomination of Judge Neil Gorsuch to the Supreme Court.

Under current rules, Supreme Court nominees need at least 60 votes to end debate and hold a vote on their confirmation. So far, 40 Democrats have publicly said they will try to block Gorsuch's nomination.

That's just one shy of the number needed to stop the nomination under current Senate rules.

The South Carolina Republican says his GOP colleagues will change the rules to enable them to confirm a Supreme Court nominee with a simple majority of 51 votes.

Graham says: "The Senate's traditions are going to change over this man. This says more about the Senate than it does Judge Gorsuch."

Senators Mark Warner and Patrick Leahy say they will vote against the nomination of Judge Neil Gorsuch to the Supreme Court.

The two Democrats are the 39th and 40th senators to say they will try to block Gorsuch's nomination. That's just one shy of the number needed to stop the nomination under current Senate rules. The nomination needs 60 votes to succeed.

However, Senate Republicans are threatening to change Senate rules to enable them to confirm a Supreme Court nominee with a simple majority of 51 votes.

All 52 Republicans are expected to support the Gorsuch.

Senator Dianne Feinstein says she will vote against the nomination of Judge Neil Gorsuch to the Supreme Court.

The California Democrat cited two cases in which, she says, Gorsuch inserted his own view of what the law should be. In one case Gorsuch sided with a trucking company over a fired trucker who refused to drive a disabled truck in subzero weather. In the other case, Gorsuch sided with a school district that denied services to a student with autism.

Feinstein also says she is troubled that Gorsuch refused to say whether he supports the outcome of Brown v. Board of Education, the court decision that ended racial segregation in public schools.

Feinstein is the top Democrat on the Senate Judiciary Committee, which is voting Monday on Gorsuch's nomination.

Senate Judiciary Chairman Charles Grassley says Supreme Court nominee Neil Gorsuch is a mainstream judge who will be independent from the president. The Iowa Republican is accusing Democrats of "moving the goal posts" in their assessment of Gorsuch.

Most Democrats are expected to oppose the nomination.

The Republican-led Judiciary Committee meets Monday and is expected to back Gorsuch and send his nomination to the full Senate, most likely on a near-party line vote. Intent on getting Trump's pick on the high court, Majority Leader Mitch McConnell, R-Ky., is likely to change Senate rules so that Gorsuch can be confirmed with a simple majority in the 100-seat chamber, instead of the 60-voter threshold.

So far, 36 Democrats and one independent have announced they will vote to block the nomination on a procedural cloture vote - a parliamentary step to advance a legislative issue - and oppose the choice. Sen. Jon Tester, D-Mont., who faces a tough re-election in a state Trump won handily, announced his opposition on Sunday.