2020 election was ‘most secure in American history,’ according to CISA committees

According to the joint statement released Friday by the committees, which are part of the Cybersecurity and Infrastructure Security Agency under DHS, election officials are reviewing and double-checking the entire election process, and have not found evidence of widespread voter fraud or irregularities.

WASHINGTON - Dominion Voting Systems has filed a defamation lawsuit against the MyPillow company and CEO Mike Lindell, a prominent supporter of former President Donald Trump, alleging that Lindell defamed the company with false claims that it rigged the 2020 presidential election for Joe Biden.

In the 115-page lawsuit, filed Monday in the U.S. District Court for the District of Columbia, the company is seeking more than $1.3 billion in damages. Dominion cites a number of statements made by Lindell in the complaint, including on podcasts, TV and other media appearances, on social media, and a two-hour film claiming to prove widespread election fraud — which Lindell helped to produce.

The suit alleges that Lindell, the founder and face of Minnesota-based MyPillow, Inc., made false claims about Dominion’s machines and that the company "had stolen the 2020 election." Dominion also alleges that Lindell was "well aware" that there was no credible evidence to back up his claims.

"Lindell exploited another chance to boost sales: marketing MyPillow to people who would tune in and attend rallies to hear Lindell tell the ‘Big Lie’ that Dominion had stolen the 2020 election," the complaint states. "He is well aware of the independent audits and paper ballot recounts conclusively disproving the Big Lie. But Lindell—a talented salesman and former professional card counter—sells the lie to this day because the lie sells pillows." 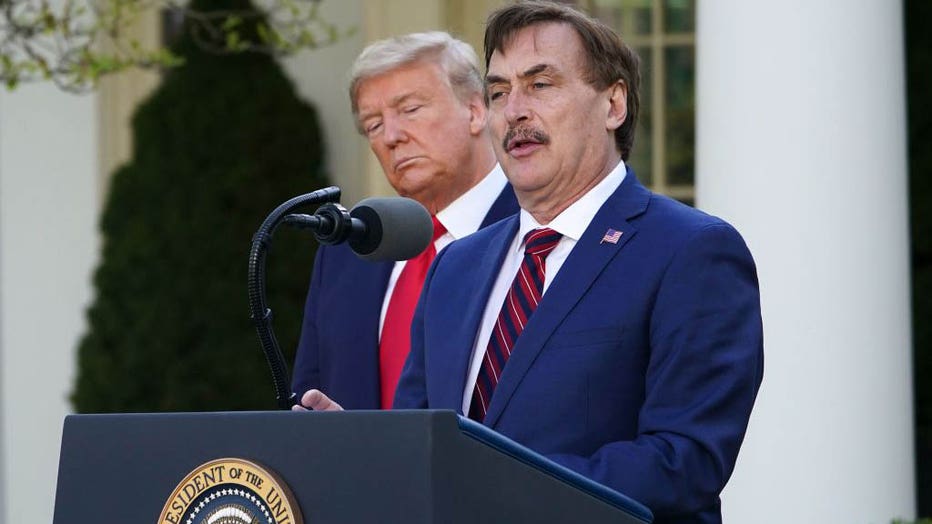 FILE - Then-President Donald Trump listens as Mike Lindell, CEO of MyPillow Inc., speaks during the daily briefing on COVID-19 in the Rose Garden of the White House in Washington, DC, on March 30, 2020. (Photo by MANDEL NGAN/AFP via Getty Images)

Government and election officials repeatedly have described the election as the most secure in U.S. history. Even former U.S. Attorney General Bill Barr, a Trump ally, said before leaving his post that there was no evidence of widespread fraud that would overturn the result.

Nearly all the legal challenges from Trump and his allies have been dismissed by judges, including two tossed by the Supreme Court, which includes three Trump-nominated justices.

Republican governors in Arizona and Georgia, key battleground states crucial to Biden’s victory, also vouched for the integrity of the elections in their states.

Dominion is one of the nation's top voting machine companies. Its technology was used in 24 states, including Georgia — the critical battleground that Biden won and which flipped control of the U.S. Senate. The company has also filed separate defamation lawsuits against lawyers who represented Trump, Rudy Guiliani and Sidney Powell, for pushing the false claims it rigged the election.

Dominion said Lindell’s statements have exposed the company to "the most extreme hatred and contempt."

"For Dominion—whose business is producing and providing voting systems for elections—there are no accusations that could do more to damage Dominion’s business or to impugn Dominion’s integrity, ethics, honesty, and financial integrity," the complaint states. "Lindell’s statements were calculated to—and did in fact—provoke outrage and cause Dominion enormous harm."

The complaint said that Dominion sent a cease-and-desist letter to Lindell in December, demanding that he stop making false claims about the company.

In response, Lindell told the Wall Street Journal that he was "very, very happy" to learn of the lawsuit.

"I have all the evidence on them," he said. "Now this will get disclosed faster, all the machine fraud and the attack on our country."

Lindell, who just a few years ago was best known for his late-night infomercials to sell his pillows, became a vocal Trump supporter and donor during the former president’s time in office. By his own estimate, Lindell was a warm-up speaker at more than 60 Trump campaign rallies, drawing frequent shout-outs from the president and even co-chairing Trump’s Minnesota campaign.

He has repeatedly shared unsubstantiated claims that the presidential election was rigged — even after U.S. President Joe Biden’s administration took office. Many of Lindell’s claims about the outcome were labeled by Twitter as disputed before he was ultimately banned last month over "repeated violations" of its policy.

In December, he posted but later deleted a tweet calling on Trump to declare martial law and seize the ballots and voting machines in seven key states.

While he said he opposed the deadly Capitol insurrection, MyPillow’s logo was prominently featured on a website that promoted the Jan. 6 Trump rally that preceded the riot. Lindell has claimed "antifa" was responsible for the riot, even though authorities say there’s no evidence of that.

Major retailers such as Bed Bath & Beyond and Kohl’s have since said they would stop carrying MyPillow’s products.