A stunning twist in the Oakland School Board race. Mike Hutchinson – who thought he lost his race in District 4 - actually won. The Alameda County Registrar of Voters revealed an error in the tabulation process that would have moved Hutchinson from third place to first.

OAKLAND, Calif. - A stunning twist in the Oakland School Board race. Mike Hutchinson – who thought he lost his race in District 4 - actually won. The Alameda County Registrar of Voters revealed an error in the tabulation process that would have moved Hutchinson from third place to first.

Until now, Nick Resnick was declared the winner.

In a news release, the Alameda County Registrar of Voters wrote:

"Several jurisdictions use Ranked-Choice Voting ("RCV") to conduct their elections in the County of Alameda. The ROV learned that its RCV tally system was not configured properly for the November 2022 General Election.  It should have been configured to advance ballots to the next ranking immediately when no candidate was selected for a particular round.  This means that if no candidate was selected in the first round on the ballot, then the second-round ranking would count as the first-round ranking, the third-round ranking would count as the second round ranking, and so on.  For the November 2022 General Election, the setting on the County’s equipment counted the RCV ballots in the manner in which the ballot was completed, meaning no vote was registered for those ballots in the first round of counting because those voters did not identify a valid candidate in a particular rank on the ballot.  Once it became of aware of the issue, the ROV immediately investigated it.  The ROV worked with its vendor to figure out the source of the issue and to resolve it.  After reviewing the election data and applying the correct configuration, the ROV learned that only one outcome was affected: Oakland School Director, District 4, for the Oakland Unified School District.  No other result for any RCV election in any jurisdiction was changed. The ROV has notified the City of Oakland, Oakland Unified School District, School Director District 4 candidates, and the Secretary of State. The ROV is currently working with its vendor to provide safeguards so that this does not happen in future elections."

"About 250 votes in my race had to be re-tabulated because of this difference in the algorithm. And that was enough to change the results," said Hutchinson. 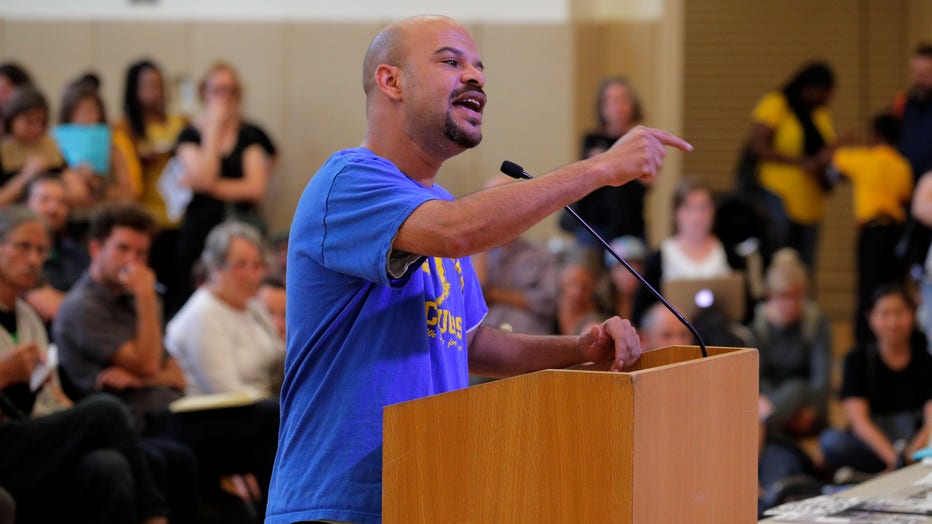 Mike Hutchinson, a former teacher and now education advocate, speaks before the school board during an Oakland Unified School District meeting where the proposals to merge several elementary schools were discussed at La Escuelita Education Center in

Sean Dugar, with the California Ranked Choice Voting Coalition, said, "It’s human error. It’s simply a button that was checked on the algorithm that should not have been checked."

Dugar said the error was discovered when the organization "FairVote" noticed discrepancies between their results and the registrar when they ran simulations of votes cast.

"They were able to narrow it down to a problem we call ‘suspended ballots’ which is a ballot where someone may have skipped their first choice ranking but ranked somewhere else on their ballot," said Dugar.

The school board race was so tight that those extra votes were enough to bump Hutchinson up. But instead, he was eliminated. Hutchinson is now seeking legal advice, and wants the new results certified.

"I have a lot of empathy for the other candidate in District 4 Nick Resnick," said Hutchinson. "But I accepted the results when I thought I had lost by 41 votes. So I’m hopeful in the end when people have a couple of days to absorb the news that we can all come together around what the official results are and follow through with them."

This error in the algorithm impacted jurisdictions within the county that use ranked choice voting – that’s Oakland, Berkeley, and San Leandro. Dugar said after running the numbers, only one race flipped. Even though the Oakland mayor’s race was not impacted, Dugar thinks a recount could help with election integrity.

"We are calling for the Registrar to do a full manual recount of the Oakland Mayor’s race at their own expense because they made a gaffe, and it’s up to them to restore trust in our local elections," said Dugar.

Nick Resnick did not respond to KTVU’s request for comment.

Hutchinson currently sits on the school board for District 5. Because of redistricting, his home is now in District 4 which is why he decided to run for the District 4 seat. If the election results are officially overturned, Hutchinson will resign from District 5 and a new member will be appointed.