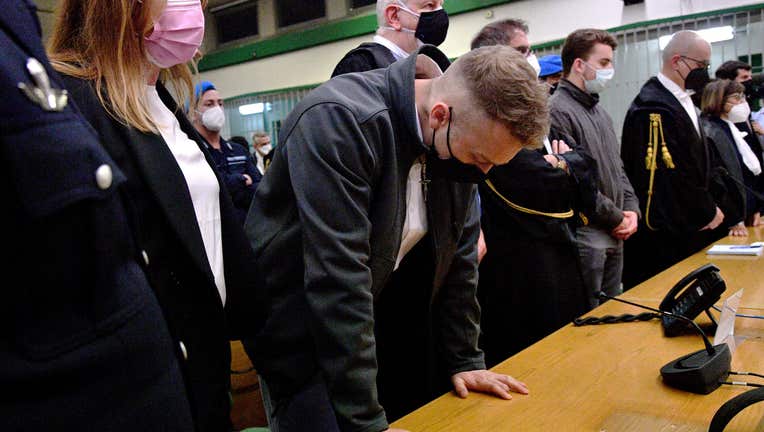 US citizen Finnegan Lee Elder (C) reacts after the court decision on May 5, 2021, during his trial, along with another US citizen on murder charges after Carabinieri officer Mario Cerciello Rega was killed in July 2019, in Rome. - An Italian court co

ROME - The family of one of two American youths, both convicted of a fatal stabbing during a scuffle with an Italian police officer, on Thursday blasted the jury for ordering Italy's harshest punishment of life imprisonment, a sentence frequently meted out to mobsters who assassinate state officials.

Months after the July 26, 2019 slaying of Carabinieri Vice Brigadier Mario Cerciello Rega in Rome, prosecutors asked for indictments for the two teenage friends from California. They described them as being in cahoots from start to finish, even though only one of them wielded the knife in what their lawyers steadfastly contended was in self-defense.

When trial ended Wednesday night, more than 14 months later, the jury convicted both on all charges and handed down life sentences — a ruling that U.S. lawyer Craig Peters called "a mockery of justice."

Finnegan Lee Elder, now 21, said that he stabbed the 35-year-old Cerciello Rega because he feared he was being strangled as the two scuffled on a Rome street. Gabriel Natale-Hjorth, now 20, testified that at his friend's request, he hid the knife in their hotel room after the stabbing.

Each was convicted of five identical counts: murder, attempted extortion, resisting a public official, injuring the officer's plainclothes partner and carrying the attack-style knife outside of home without due cause.

Natale-Hjorth testified that he didn't know Elder had a knife on him.

The two police officers, in casual summer plainclothes, had been dispatched to follow up on an alleged small-scale extortion attempt. The two Americans had paid for cocaine in a Rome nightlife district but didn't get it. In retaliation, they snatched a backpack with a cellphone that belonged to the go-between of the botched deal. The go-between told police he had been contacted by Natale-Hjorth, who told the man he'd give back the bag and the phone if they got their money back.

"They gave him and they gave Gabe a sentence that is befitting a Mafia boss who wantonly kills innocent people,'' Peters, a spokesman for the Elder family, told The Associated Press in an interview Thursday.

"How could these two boys possibly be in that same league? So from a reasoned standpoint, the verdict didn’t make any sense to hold them guilty on every single charge," Peters said. "And from a compassion standpoint, it made no sense to put them on the same level as cold-blooded killers ... even the prosecutor acknowledged there was no premeditation here."

Italy's justice system is supposed to stress rehabilitation. Many sentenced to life imprisonment are often released after serving 20 years. There is an ongoing debate, however, over whether convicted mobsters, serving time for crimes including multiple murders and bombings that killed magistrates and anti-Mafia investigators, should have to stay in prison till death.

The Americans' defense teams are likely to highlight apparent failure of the Italian police to follow procedures. Neither Cerciello Rega nor his fellow plainclothes partner Andrea Varriale brought their service pistols on their assignment.

A top Carabinieri official has said it was unknown why Cerciello Rega left his pistol in his locker. Varriale, who scuffled with Natale-Hjorth, offered various versions, eventually testifying that he, too, didn't bring his weapon.

Varriale claimed the two officers showed their police badges, while the Americans said they didn't and that they thought the Italians were drug dealers or mafiosi.

Not infrequently, Italian appeals courts either throw out earlier convictions or significantly reduce the sentences.

One noted example of that involved a young American woman, Amanda Knox, and her former Italian boyfriend, Raffaele Sollecito. In that case, Italy’s top criminal Cassation court scathingly faulted prosecutors for presenting a flawed and hastily constructed case. It threw out their lower court convictions for the 2007 murder of her British roommate in Italy. Had they lost their final appeal, Knox would have faced 28½ years in an Italian prison; the Italian, 25 years.

At the Italian appeals level, Peters said, "hopefully we will have more sophisticated, more experienced, more reasonable and rational judges who will actually do the hard work of trying to make sense of all this and then fairly apportion justice."