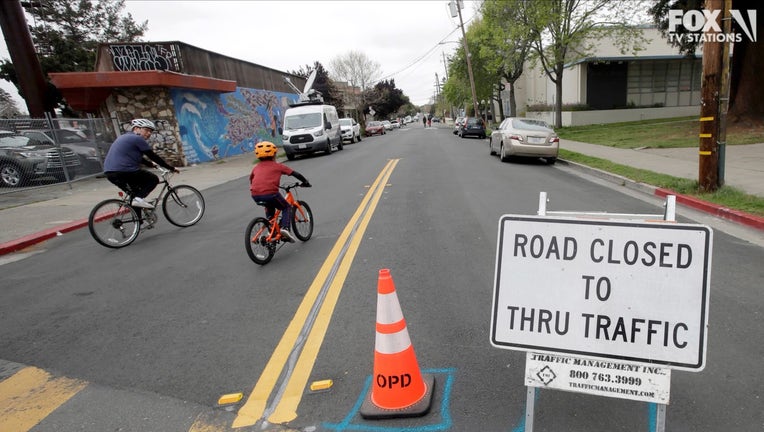 FILE - In this April 11, 2020, file photo, a man and child ride bicycles on 42nd Street, which was closed to traffic, in Oakland, Calif. All around the country and the world, bicycles are selling out and officials are trying to take advantage of the

OAKLAND, Calif. - The city of Oakland installed the final segment of its Slow Streets program in East and West Oakland Friday and announced a pivot to focusing on the future of the program during the COVID-19 coronavirus pandemic.

City officials said the closures will offer easier access to the food distribution sites at the middle school and senior center and to curbside pick-up at the library. The areas also have signage detailing the city's community resources available during the pandemic.

The city will transition to the second phase of the Slow Streets program. Phase two will continue until a vaccine is widely available, according to city officials, and will allow the city of Oakland to respond to community feedback on the program and consider making it permanent in some form.

Residents can complete a feedback form for the program online. General feedback for how the Slow Streets program can serve the city's neighborhoods can also be submitted by calling (510) 615-5566, e-mailing OAK311@oaklandca.gov, visiting 311.oaklandca.gov or downloading the OAK311 mobile app.