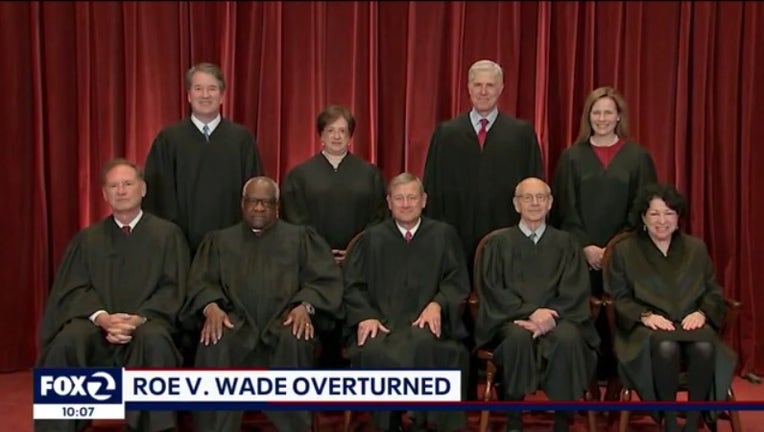 OAKLAND - The Supreme Court's decision to overturn the landmark abortion rights ruling in Roe vs. Wade was in response to the Mississippi case Dobbs versus Jackson Women's Health Organization, pitting a Mississippi state law against the clinic's claim of constitutional rights to provide an abortion.

Justice Samuel Alito wrote for the majority with conservative Justices Barrett, Gorsuch, Kavanaugh and Thomas. Chief Justice John Roberts agreed with the majority in the Dobbs case, but felt change should be incremental and Roe should not be overturned. In the minority were dissenting Justices Breyer, Kagan, and Sotomayor

The 213 page opinion was posted on the Supreme Court's website.

"The Constitution does not confer a right to abortion; Roe and Casey are overruled; and the authority to regulate abortion is returned to the people and their elected representatives," wrote Alito.

Justice Alito noted that the 1973 Supreme Court ruling on Roe versus Wade, cited a right to personal privacy.

On that issue of privacy, Alito wrote, "Roe conflated the right to shield information from disclosure and the right to make and implement important personal decisions without governmental interference."

"He would be so sad to see Roe fall after nearly 50 years," said Rao.

Rao said the legal dispute is over the Constitution's vague language.

Alito also noted the 1992 Supreme Court in Planned Parenthood versus Casey, cited the Fourteenth amendment right to due process and the liberty or freedom to make intimate and personal choices. Alito, however, wrote that due process for abortion is not found in the Constitution or the first eight amendments, and there's no evidence that abortion rights were rooted in the nation's history.

"By the time the Fourteenth Amendment was adopted, three-quarters of the States had made abortion a crime at any stage of pregnancy," Alito noted.

The three liberal Justices Breyer, Kagan and Sotomayor dissented and said overturning Roe and Casey violates American's rights of due process, privacy and liberty and jeopardizes other cases.

"The right Roe and Casey recognized does not stand alone...to the contrary, the Court has linked it for decades to other settled freedoms involving bodily integrity, familial relationships, and procreation," the dissenting Justices wrote.

Professor Rao says the Court's decision goes against the decisions and precedents set by prior Supreme Courts and now forms the basis for challenging other modern rights.

"The Supreme Court in the case Griswold against Connecticut, they interpreted the constitution to protect the right to privacy. Even though the word privacy is nowhere mentioned in the text of the Constitution," said Rao, "The liberty that is protected against deprivation without due process of law...those protect the right to terminate pregnancy, use contraceptives, to engage in marriage, to choose your sexual partner."

Justice Alito did address that point, writing, "The Court emphasizes that this decision concerns the constitutional right to abortion and no other right. Nothing in this opinion should be understood to cast doubt on precedents that do not concern abortion."

Professor Rao says the Court's decision likely will lead to a huge legal battle in courtrooms nationwide, with a patchwork of state laws and lawsuits.