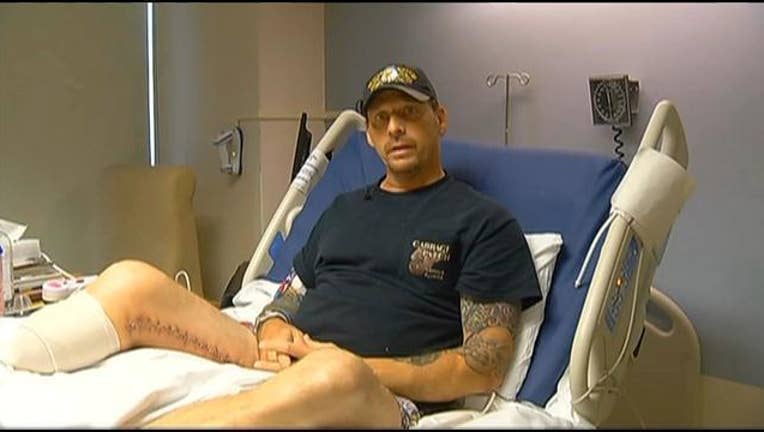 FORT MYERS, FL- A Florida man is recovering after he lost his foot and part of his lower leg.

Doctors say it was caused by flesh-eating bacteria that he contacted during a day at the beach.

Now, lying in a bed on the fourth floor of Health Park Hospital, Zachary Motal shared the shock that's still gripping him.

"It's been a hard thing to go through to wake up every morning and not see your foot there anymore," Motal explained.

He believes it started when he waded into the waters of Fort Myers Beach.

In less than 48 hours, he was hospitalized.

"They took me up to ICU and within a few hours they were cutting my foot off," he explained, "The doctor said if I hadn't have got here when I did, within four hours I would have been dead."

He's sharing his story based on his firm belief the trouble was in the water.

Fox 4 checked the recent water test results from the State Health Department, and they showed no advisories along Fort Myers Beach, or elsewhere for that matter.

"It made me feel horrible, because this is the only way I could've contracted this disease is that water. Even the doctor said so. So who are we going to believe, a doctor who spends his life studying infectious diseases, or somebody who says they tested the water?" he explained.

He blames that water for a condition that initially put him in agonizing pain, and nearly ate him to death.

"My foot was swollen and purple like a football...I was in tears, I was literally crying on my floor, because it hurt so bad," Motal said, "When I came in here I weighed 255 pounds, now I weigh 209."

As his Harley cap in honor of his beloved bike, and his colorful tats might imply, Zach is not the type who backs down from a challenge.

In this case, to make his warning heard.

"I don't plan on giving up. I just want the public to be aware of what's out in our water is very dangerous, it'll take your limbs, or worse, your life," Motal said.

However there is now good news for Zachary Motal,

He just learned a company will be giving him a prosthetic leg, for free.