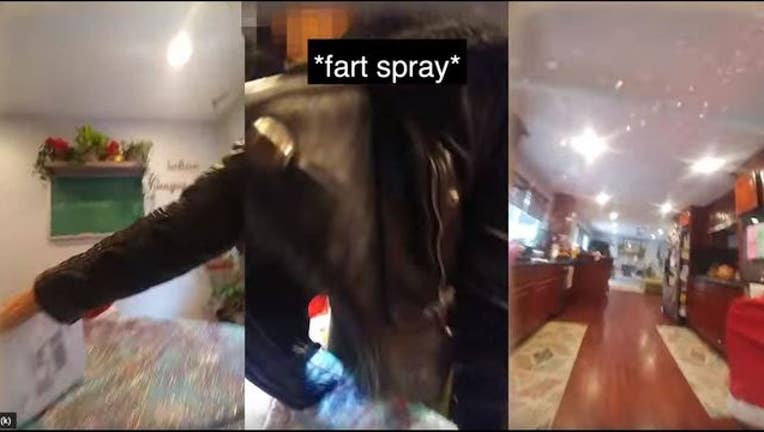 A glitter bomb explodes on a woman in her home. Undated. Photo: Mark Rober via YouTube

OAKLAND, Calif. (KTVU) - A former NASA engineer-turned-YouTuber spent the last part of the year on what he calls his “magnum opus” – a glitter bomb that explodes on package thieves – an invention that has the internet in a tizzy about this vigilante engineer and his custom-built revenge package.

Mark Rober, 38, posted his “Package Thief vs. Glitter Bomb Trap” video on YouTube two days ago, and on Wednesday morning, the 11-minute part-tutorial, part-documentary had more than 25 million views.

In it, Rober explains in a hilarious manner what prompted him to come up with his “overly designed" contraption complete with a pound of glitter and a cannister of fart spray. Seven months ago, Rober's home surveillance video captured a couple stealing a package off his porch.

“You just sort of feel violated,” he said on the video. When he went to the police, officers told him they couldn’t do much.

So, since he had spent nine years working for NASA, including designing hardware for the Mars Curiosity rover, Rober said he was the guy who could indeed “engineer the crap” out of idea and turn it into reality.

His brainstorm?  A GPS-enabled device, wrapped like a package, that explodes with a “butt ton” of glitter onto the thief, spouts a regular burst of fart spray and then captures everything onto four camera phones so that Rober can finally enjoy the fruits of his labor with a hearty laugh back at home.

His video shows several busts where suspects get back in their cars or homes after taking a package. Often, the suspects shouted, “Yo WTF! Come on bro,”  as the glitter explodes all around them. When the fart spray goes off, one man is heard moaning, “Ooooooof. What is that smell?”

Rober explained his motives and a bit of the work that went into the painstaking project, where he showed off a bunch of circuit boards and something called a “built-in accelerometer” that comprise his contraption. He also highlighted what he called his piece de resistance: The glitter bomb is shrink wrapped to look like a regular looking package, complete with the delivery label from his “childhood hero and inspiration,” the fictional Kevin McAllister, played by actor Macaulay Culkin, in “Home Alone,” who booby traps his house against burglars, Harry and Marv.

Package thievery is real, and the epidemic is growing. According to InsuranceQuotes, 26.1 million Americans have had a holiday package stolen from a front porch or doorstep. This is up from 25.9 million last year, and 23.5 million in 2015.

Rober wasn’t available for immediate comment on Wednesday, but public records show that he has lived in Sunnyvale, Calif. and his Twitter bio lists San Francisco as his location. Records also show that he lived in Illinois, where he caught one of the porch pirates, and now resides in Brea, Calif.

Rober is now a viral sensation. People on Twitter, Instagram, YouTube and Reddit are championing him as their hero. “The fart spray was a nice touch,” someone wrote.  Entrepreneur Chris Sacca called Rober a “vigilante engineer who decides to take up doorstep package thieves. So good.”

As for Rober’s particular weapon of choice?

He explained in the video that he chose it to “celebrate their choice of profession with a cloud of glitter.” Because, as he asked, rhetorically, “Who doesn't love glitter?”