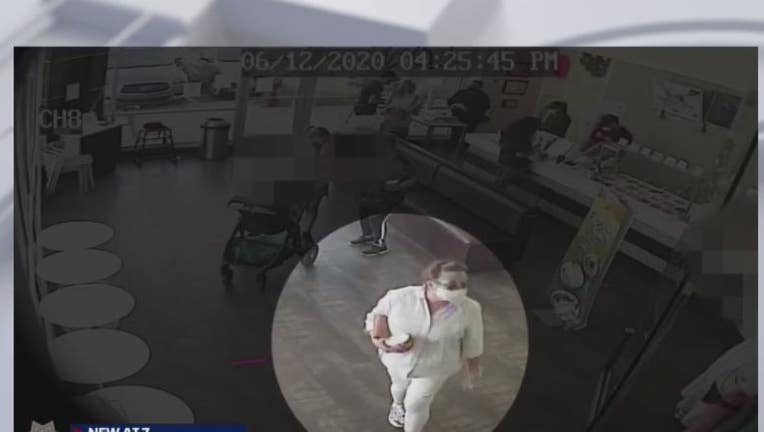 Nancy Nordland, 66, of San Jose charged with assault for intentionally coughing on a child at San Jose Yogurtland in 2020.

Nancy Nordland, 66, of San Jose, infamously made headlines last summer when surveillance video surfaced of her coughing in a one-year-old child's face while the baby was in a stroller.

The D.A.'s office said on June 12 at the Cottle Road Yogurtland, Nordland got into an argument with the child's mother and did not like how close the mom was standing to her while in line.

After the disagreement, Nordland removed her face mask, bent over and coughed right in the child's face as seen on the video that went viral.

Nordland was confronted by shocked employees and customers, but she fled the scene without paying for her fro-yo.

Police were able to identify the suspect within a day after they released the video. Nearly a dozen tips from the community came in.

The former elementary school teacher lost her job with the Oak Grove School District shortly after the incident was reported. She had been a teacher at Alex Anderson Elementary School in San Jose.

"All of us must practice empathy and patience as we work together through this pandemic," District Attorney Jeff Rosen said. "Taking your frustrations out on someone’s child is unacceptable - and criminal."

Nordland is set to be arraigned for the misdemeanor assault charge Tuesday at 9 a.m. at the Hall of Justice in San Jose.

Bay City News reported she faces up to six months in jail and a $1,000 fine. She was not available for comment Friday.