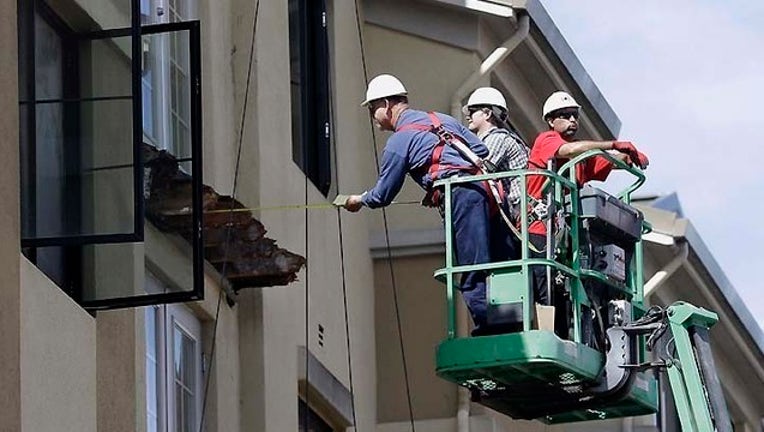 FILE- In this Wednesday, June 17, 2015 file photo, a worker measures near the remaining wood of an apartment building balcony that collapsed, killing six college students and injuring several others in Berkeley, Calif. (AP Photo/Jeff Chiu, File)

Gov. Jerry Brown today signed a bill requiring inspections of apartment balconies, decks, outdoor stairs and elevated walkways to hopefully avoid deaths from collapses like the one in Berkeley in 2015.

At a birthday party in June 2015, six young people died when a fifth-story balcony collapsed, according to the office of state Sen. Jerry Hill, D-San Mateo and Santa Clara counties, who co-authored the bill, Senate Bill 721.

An investigation revealed the balcony had been poorly sealed and became infested with dry rot and the builder had a history of lawsuits related to construction defects, Hill's office said.

Now 15 percent of the load-bearing, exterior elements on apartment buildings and complexes with three or more units must be inspected every six years.

Elements that must be inspected include balconies, decks, porches, stairs, walkways and entryways.

Those elements must be inspected if they extend beyond the building's exterior walls and are six or more feet above the ground and get stability and support from wood or wood-based products.

State Sen. Nancy Skinner, D-Berkeley, was the other author of the bill.