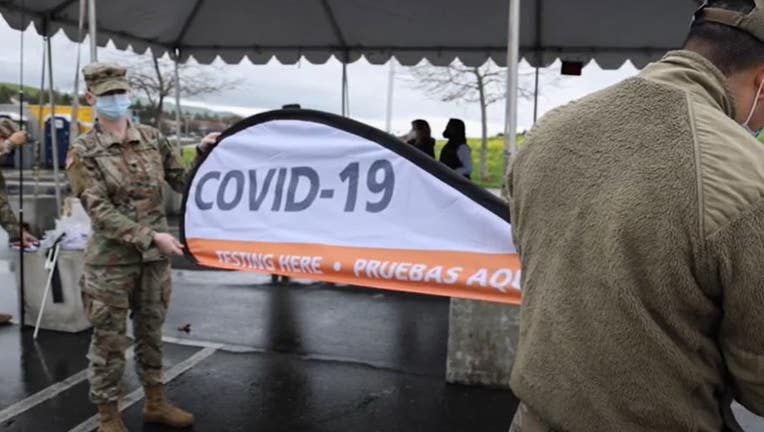 ANTIOCH, Calif. - Governor Gavin Newsom on Friday announced he was activating California's National Guard to help with additional COVID-19 testing facilities and capacity as cases from the omicron variant continue to surge.

There are already 6,000 previously existing COVID testing sites throughout the State of California, the governor said. The plan allows for 200 Cal Guard members to be deployed to 50 Optum Serve sites throughout the state where they will serve in the interim as permanent staffing is hired. The Guard will help with crowd control and their presence will increase capacity for walk-up service.

National Guard members were seen assisting at Antioch Community Center testing site on Friday. Video provided by the governor's office, shows personnel setting up infrastructure near a ‘Bus Test Express’ mobile ‘MegaBus’ health center. The site has doubled the number of testing windows and appointments available per day, according to a press release from Newsom's office.

The situation has not been the best, with local testing sites failing to meet demand, much like the rest of the country, as the most highly-contagious variant of the novel coronavirus yet, spreads. Still, Gov. Newsom considers the state's testing system to be "robust" and the "most extensive in the nation." The situation has kept public health officials on edge, worried that the vertical wall of case data would lead to overwhelmed hospitals.

Omicron has already wreaked havoc on staffing situations. Sick calls in the airline industry have caused widespread cancellations and delays for weeks as travelers tried to make it home for the holidays and return from gatherings. Public transit systems and first responders are feeling the impact of sick staffers having to isolate and quarantine if infected or exposed.

Teachers have held ‘sickouts’, including those from districts here in the Bay Area over COVID protocol and safety measures in the classroom. Newsom was criticized this week because test kits he had promised to districts were delayed.

In a news release, Newsom said the state has distributed 9.6 million COVID tests to schools since early December.

The omicron variant now accounts for 80% of total COVID cases in the state of California, according to the governor's office.