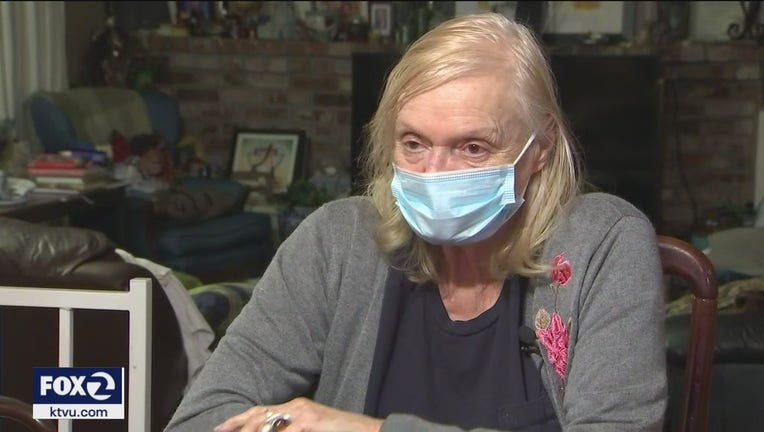 OAKLAND, Calif. - Tuesday marked one year since the Grand Princess cruise ship made its way under the Golden Gate Bridge and docked at the Port of Oakland. It was a story that made international headlines and marked the Bay Area's first large coronavirus outbreak.

KTVU spoke with one of the cruise ship passengers and an ICU doctor about their reflections one year later.

"It was memory jogging to go through all this," says Stella Torrez as she reviews the paperwork to book a Princess cruise for this fall.

"Just relaxing. Get away from it all. It was like turning off the world," the 78-year-old says. It was anything but relaxing a year ago on this date.

The retired school teacher disembarked from the Grand Princess at the Port of Oakland.

Torrez was among the thousands of passengers on their way to Mexico when the cruise ship was turned around because of a COVID outbreak.

"It was an adventure. The whole life changed afterward," says Torrez.

People in masks and gowns greeted her as she  got off the ship and was flown to Miramar Naval Air Station in San Diego to be quarantined.

"There's a higher power in control. You just have to go along with what's happening," says Torrez.

"You really saw the chaos. You really saw how stretched everyone was," says Dr. Sergio Urcuyo, an incident commander for COVID response at Contra Costa Regional Medical Center in Martinez.

For him, the pandemic began in early February of last year.

"Even though I was scared inside, I was certainly gowning up doing all the things I know how to do," says the ICU doctor who also serves as the hospital's medical director.

He and his team treated passengers from the Diamond Princess, a cruise ship kept off the coast of Japan.

Passengers were later flown to Travis Air Force Base. Those with symptoms were transported to hospitals.

"When this started, we didn't know airborne, not airborne. Does it go to surfaces?" says Dr. Urcuyo.

He says it's important to remember how far we've come from a year ago when dealing with the pandemic.

"Everybody just wanted to solve the problem and make it better with what was happening. I think my lesson, if I had to say one: with our focus, we're capable of anything," says Urcuyo.

As for Torrez, she's received both doses of the COVID vaccine and she's ready for another cruise, with no second thoughts.

"Life is for the living. We take one day at a time. Try to make the most of it," says Torrez.

She says optimism and faith have helped her through the isolation both on the cruise ship and here at home.

Urcuyo says he too is looking forward to taking a vacation.