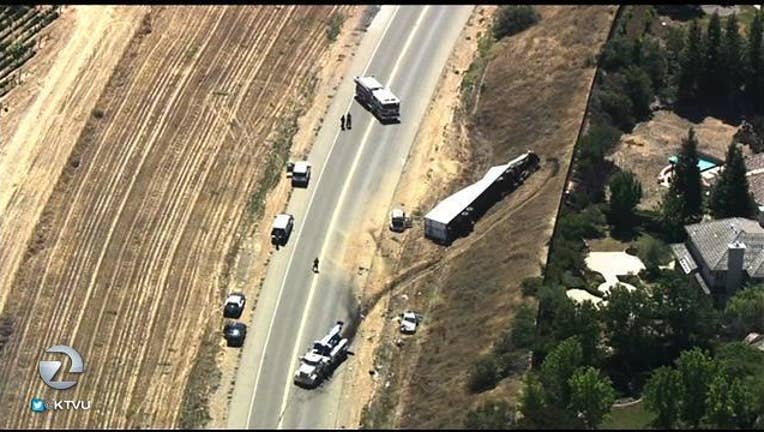 LIVERMORE, Calif (KTVU) - A fatal crash involving a big rig on State Route 84 has some neighbors calling for a ban on the big haulers.

"A lot of these things, these fatals have been big trucks," Nat Ceglio told KTVU, as he drove out of his Ruby Hill neighborhood, and onto Highway 84.

"With them, what would be a fender bender becomes a disaster," Ceglio added.

On July 15, before dawn, a big rig loaded with bottled water couldn't slow in time to avoid traffic, and rear-ended three cars. A 65 year old man in one of the cars was killed instantly. The truck then ran 35 feet up an embankment before it flipped on its side.

"At 4:30 in the morning, there's a lot of heavy traffic coming from Tracy, Modesto, and those areas, " resident Chuck Singamsetti told KTVU, describing how he heard the wrenching metal of the wreck and ran into his backyard to look over the fence at the highway.

"All I could see from this point on was debris," recalled Singamsetti, "and we were fortunate that was a water truck."

Singamsetti worries, too, about the safety of big rigs navigating the curves of a busy commute corridor.

"If it was a gasoline truck, I'm pretty sure with the dryness of this area, it would just torch," he declared.

Highway 84 connects Interstate 580 and Interstate 680, a shortcut favored by many truckers because it shaves off time getting from one freeway to the other.

But for several years, residents of Ruby Hill in Pleasanton have joined together, calling for a big rig ban or at least a lower speed limit.

"Take it down to thirty miles an hour on hills," recommended Ceglio, "so at least the trucks are coming through at a reasonable speed.

Their group, www.84safety.net, also urges a ban on drivers turning right on red lights, onto busy 84, and into fast-moving traffic.

They worry that trucks don't have the time or space they need to react to other drivers.

"Since truckers see it's a five minute shortcut they end up taking that road," cautioned Vin Pohray, who also volunteers with the group, "and they may not realizing the road has nine stoplights as well as a lot of winding single lane roads."

The concerned residents say they have lobbied local and state officials, but so far, no traction.

"Feedback primarily has been: it's not something we can do anything about. It's not our responsibility", explained Pohray.

The driver of the big rig in Wednesday's crash, plus two other drivers, received only minor injuries.

The Chino-based trucking company said the driver has seven years of experience with the company and a clean driving record.

The last fatal crash involving a big rig on SR84 was in June 2014, when a man in a Ford Taurus crossed into oncoming traffic and slammed into a semi.

Nat Ceglio believes, regardless of fault, that big trucks are simply incompatible with smaller vehicles on the highway.

"How much could they possibly lose in time, and how many lives would you save?" posed Ceglio.