Major delays were being reported on Highway 1 near Moss Landing in Monterey County on Tuesday, due to fire at PG&E battery farm.

MOSS LANDING, Calif. - Major delays were being reported on Highway 1 near Moss Landing in Monterey County on Tuesday, due to fire at a nearby power plant.

The fire broke out at around 1:30 a.m. Tuesday at one of Pacific Gas and Electric Tesla Megapack Elkhorn Battery Storage facility, the utility company told KTVU.

The incident also triggered a shelter-in-place advisory for residents in the area because of concerns about the release of hazardous materials.

"Please shut your windows and turn off your ventilation systems. In the event of changing weather patterns, impacted areas may change," Monterey County Office of Emergency Services said.

Shortly before 7 a.m., the California Highway Patrol tweeted that Highway 1 had been shut down from Salinas Road to Potrero Road.

The CHP alerted motorists to expect delays. As of about 1:30 p.m., the agency said that there was no estimated time of when the highway would reopen, citing ongoing concerns over air quality.

This afternoon, emergency officials said that local residents with valid identification were being allowed limited access in the closure area, though they stressed that residents would not be allowed to move back and forth through that area. 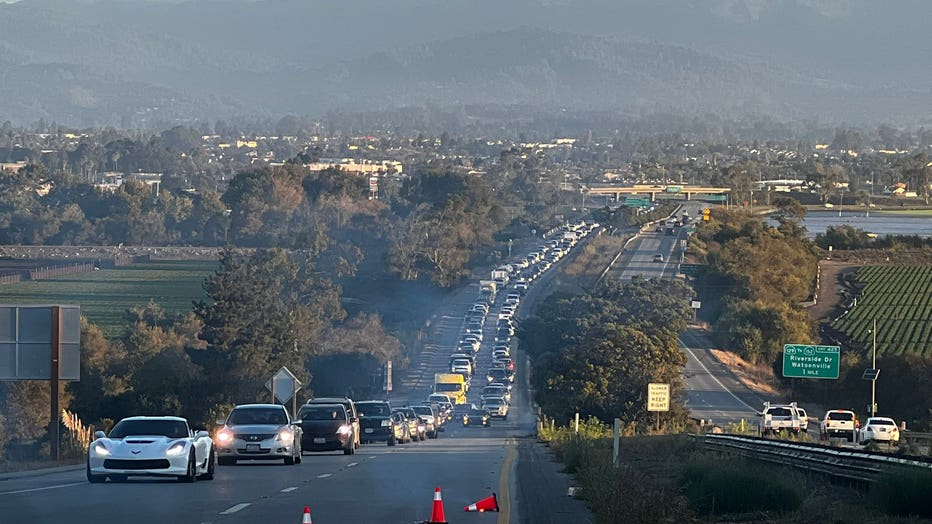 The California Highway Patrol shut down a stretch of Highway 1 in Monterey County on Tuesday, Sept. 20, 2022, due to fire at a power plant in Moss Landing.  (CHP Santa Cruz)

PG&E said its crews were working with firefighters to stop the spread of the fire and that no injuries were reported.

"Safety systems at the facility worked as designed when the issue was detected, and automatically disconnected the battery storage facility from the electrical grid," PG&E told KTVU in an email update.

The utility also said that customers were not experiencing outages related to the fire.

Preliminary findings showed property damage was expected to exceed $50,000, according to PG&E.

This type of fire isn't new. For example, a 2021 Tesla Megapack Australian battery fire raged for a long time. Since 2018, research shows there have been 40 large lithium-ion battery fires, not all of them have been Tesla. 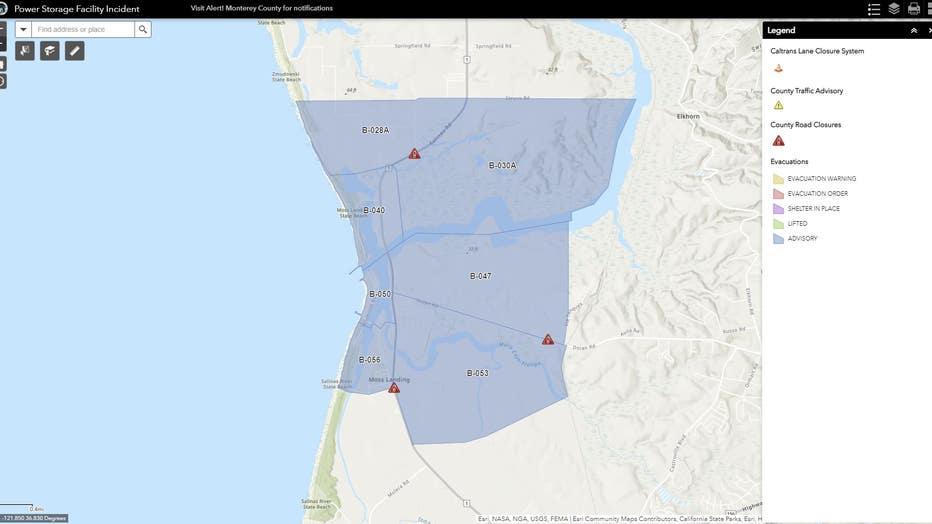 This map issued by the Monterey County Office of Emergency Services showed the areas affected by the shelter in place advisory on Tuesday, Sept. 22, 2022. The advisory was in effect for residents in the area of Moss Landing West of Dolan Rd/Via Tanqu