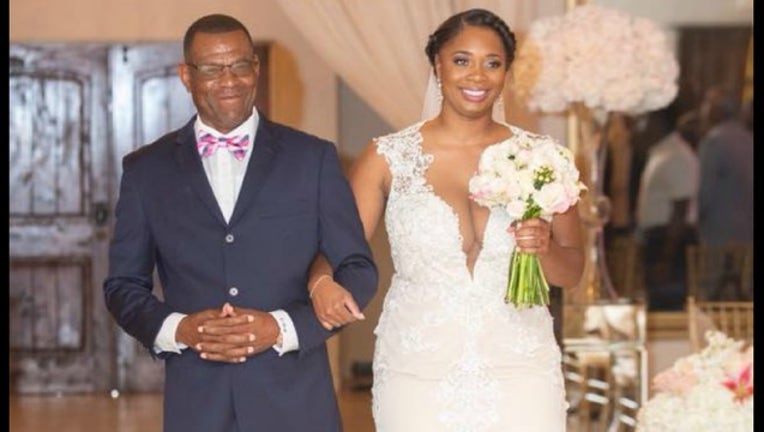 OAKLAND, Calif. (KTVU) - Last month when Oakland native Jelela Simpson got married, her high school basketball coach, also known as her mentor and one of her best friends flew out to the wedding in Texas to gave her away.

Simpson, now a resident of Houston, said shortly after getting engaged, she called up her former coach and asked him to walk her down the aisle.

"I don't know why he was surprised. He was so dramatic," Simpson said, "He should have known."

Gray became Simpson's coach more than 15 years ago, when she began playing basketball at Oakland Technical High School. She graduated in 2003.

Simpson was among the nearly 70 girls Gray coached there, and she is among his many "kids" with whom he's continued to keep in touch. Gray now coaches Oakland High's girls basketball team.

Simpson told KTVU that like most of her teammates, she grew up in a single parent home.

"We didn't have that two parent home," she said. So Gray played an integral role both on and off the court not just in her life, but Simpson described him as a "father figure" to the whole team.

"My dad wasn't in my life during the crucial years," she said. "So he just became the pivotal role model for me," she said of her former coach, whom she still calls "Mr. Gray."

As he did now when he flew out to Houston to be by her side for her wedding, back then when she was teen, her coach would never hesitate to step up if there was anything she and her teammates needed.

It was important to Gray that his players did well in school and went on to college. And if they didn't have the money to pay for SAT prep classes, which was most often the case, Gray would go around to those in his inner circle and collect the cash needed to make sure his players could enroll in the class.

"Honestly, if they needed anything and he could do it, he would," Simpson said. "If my mom didn't have lunch money to give me, he would pay it," she added.

In return he would ask them to pay him back-- pay him back by promising they'll go out into the world and find a way to help others, to pay it forward.

And that's exactly what Simpson did. She went on to Houston Baptist University, where she continued to play basketball. In fact her on-the-court skills helped pay for college. After graduating, Simpson founded the non-profit G.Y.R.L.S.

The community outreach program seeks to empower and inspire teenage girls by providing them with the tools to make decisions and help them excel academically and socially, according to the organization's Facebook page.

Coach Gray's influence was a huge reason Simpson started the non-profit. It was also her own upbringing that inspired her.

"I grew up in a single parent home in Oakland, California. At the time, my mother was using drugs and neglected some of her parental duties," Simpson wrote in an article posted on her Linked-in page. "My hurt and frustrations turned me into a troubled kid that would fight and be disrespectful because of what I lacked at home."

She said she started G.Y.R.L.S because she realized that was the type of program she would have truly benefited from during the difficult years of her adolescence.

She added that while her upbringing was troubled, gratefully she has since seen her mother, who herself had a difficult childhood, turn her own life around. Simpson also credited the game of basketball for giving her an outlet and for helping her have a focus.

The organization is based in Houston, but Simpson is currently working to bring the program to her hometown, where she feels there is a deep need for such outreach and resources for communities in Oakland.

The advice from her coach to "pay it forward" has not been taken lightly by Simpson. She is also raising her niece and nephew who have joined her from Oakland and are now living with her and new husband Torry Curvey.

Through the years, there was a lot of  advice and guidance she said she received from "Mr. Gray."

She recalled the cherished walks around Lake Merritt where she and her former coach would exercise and talk, and she would receive a lot sound advice on the matters of life.

And through the years, the coach, turned mentor, has now become family. In fact she considers his entire family as her own. Her wedding served as a reunion of sorts for Simpson and the Grays, including his daughter Alexis, a familiar name in the world of women's basketball.

Alexis Gray-Lawson was also an Oakland Tech grad and had her dad as coach while she played there. She went on to Cal, where she was a stand-out player there and then played professionally for a year with the WNBA's Phoenix Mercury.

It was an emotional moment for coach Gray as he walked Simpson down the aisle and celebrated this milestone moment of her life. "I cried the whole time, I cried like a baby," he told KTVU.

And as he has done through the years since he and Simpson first met on the basketball court, he continued to offer her guidance and advice in this new chapter of her life.

A deeply religious man, he told her to remain close with God and he gave instruction that he's likely given hundreds of times to his players on the court. He told her to remember the importance of communicating with her life teammate and told her to always work together especially during the difficult times.