ICE detainee fights to be released to Oakland

Walter Cruz-Zavala has been in ICE custody for nearly four years. He's fighting to be released to Oakland. James Torrez reports

The 30-year-old Salvadoran refugee has done the same thing every day for more than 3.5 years from a cell in a detention facility that a federal judge recently called "appalling."

He is believed to be among the longest-held Northern California immigrants currently held in detention, according to his legal team.

Cruz-Zavala and his legal team from the Alameda County Public Defender’s Office say his prolonged detention is unconstitutional, borders on persecution and they are demanding that he be released from custody to an Oakland rehabilitation center.

His case comes at a time when there is fresh hope that a new presidential administration will overturn nearly a half-decade of Trump-era policies and the country's broken immigration system may be revisited with new leaders in the White House.

"Walter’s story is a phenomenal example of how much is wrong with our immigration system," said Alameda County Deputy Public Defender Raha Jorjani. "What is happening to Walter can be classified as a form of terror and torture."

Part of the torture is not having any end date to his days in detention.

When the U.S. Supreme Court held that ICE custody without bail during removal proceedings was constitutional, the justices calculated the average detention time to be between 47 and 167 days if the case went on appeal. Cruz-Zavala has been detained six and a half times that period.

Why he has been held this long as a civil detainee is an aberration, Jorjani said. Especially since he has won two prior deportation cases in 2018 and 2019. Both times, immigration judges found that Cruz-Zavala would indeed be tortured if he went back to El Salvador and they ruled he could stay in the United States.

However, the Department of Homeland appealed both times.

"Walter’s story is a phenomenal example of how much is wrong with our immigration system. What is happening to Walter can be classified as a form of terror and torture." 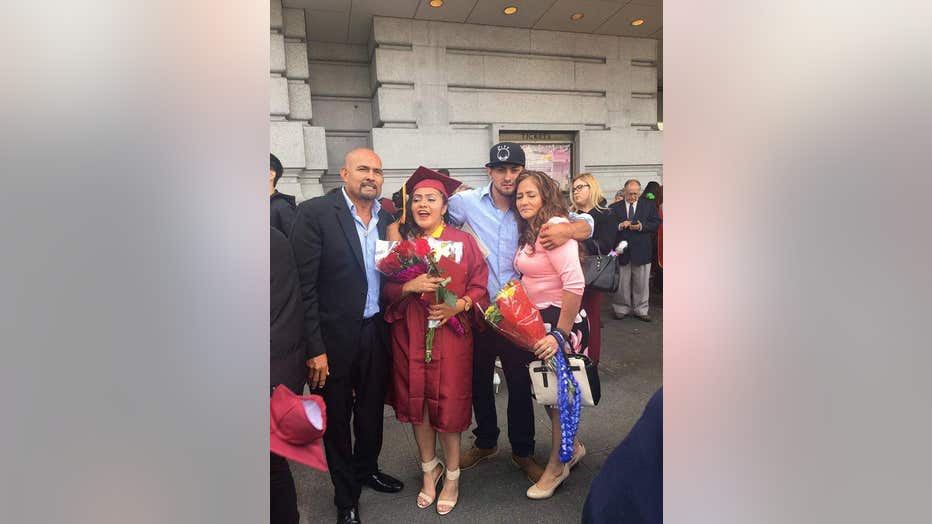 Forced to sit in custody despite winning twice

And so, Cruz-Zavala has been forced to sit in the Mesa Verde ICE Processing Center in Bakersfield during these appeals, instead of being released with an ankle bracelet to a six-month Oakland alcohol rehabilitation center. That’s where he could be receiving treatment for his alcohol use and childhood trauma until his next deportation hearing.

At some point, the court will issue a final decision but it could continue to be "remanded repeatedly," Jorjani said, as there is no limit on filing appeals. Cases can bounce back and forth for years before there is a final ruling.

"It is a mystery," said Jorjani, who has worked hundreds of hours on the case, and files her work in a thick white binder she has named "Free Walter." "I’ve never seen anything like this."

While in detention, Cruz-Zavala also contracted COVID, which he described as a horrible experience.

In an interview from Mesa Verde, Cruz-Zavala calmly described what he is going through as "mental torture."

Despite being held for so long, Cruz-Zavala said he is not angry. Just exhausted.

"I am mentally tired, fighting in this space," he said.

"Danger" to the community

The Department of Homeland Security did not provide a response for this story, and a spokesperson for ICE said the agency doesn’t comment on pending litigation. In court papers, the federal government has argued that they want to deport Cruz-Zavala back to El Salvador and that he still constitutes a "danger" to society.

But El Salvador is where Cruz-Zavala fled from when he was 14 years old because he thought it was too dangerous there.

Not only was he sexually abused by a neighbor, but he was chased by gangs.

And so he came to the Bay Area as an unaccompanied minor. His father, brothers and sister are all U.S. citizens. His mother has legal permanent residency. Cruz-Zavala is the only one in his family who is still undocumented, and he has been formally seeking asylum since 2005 on the basis that he would be tortured if he returns to El Salvador.

He joined a gang in San Francisco for protection

Once he arrived in San Francisco as a teenager, gangs approached Cruz-Zavala here, too.

He said he joined at age 17 to avoid getting harassed. Court documents show he was in a gang for about 11 months. He was convinced to tattoo an MS-13 gang sign on his chest by an informant for the federal government.

"When I was a child in El Salvador, I was abused in different types of ways," Cruz Zavala said. "My dad was in the USA and people thought my family had money. They always tried to steal my money. When I came here, I was having some issues with gangs here too. I got tired of being victimized. I ended up joining another gang to protect myself."

In 2008, Cruz-Zavala was charged during a Department of Justice gang operation focused on the Mission District in San Francisco.

He spent three years in solitary confinement in the now-closed Glenn Dyer Jail in Oakland. He was acquitted of gang conspiracy charges in 2011. He was 21 when he was released.

But the years in solitary changed him. 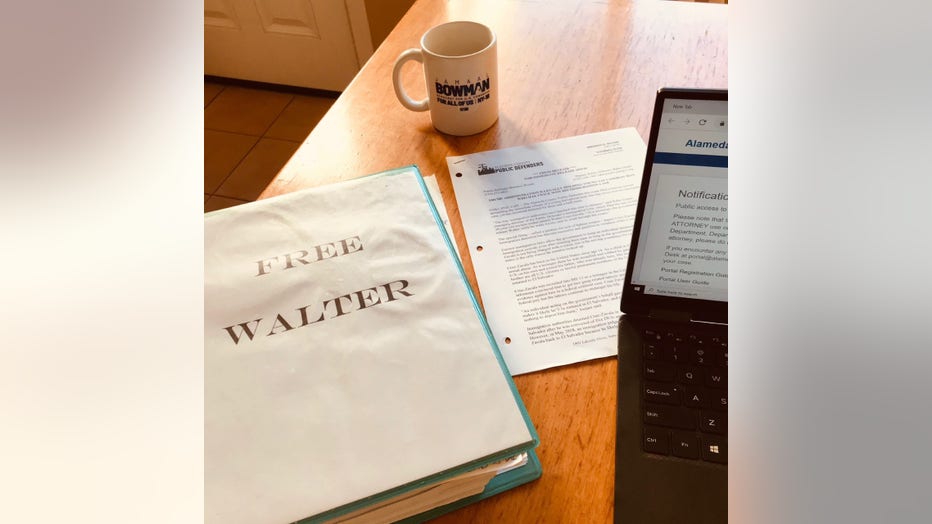 Alameda County Deputy Public Defender Raha Jorjani has a "Free Walter" binder that she's been using while her client has been in ICE custody.

He was acquitted, though years in solitary caused trauma

"Walter has undergone severe, severe trauma," Jorjani said, noting that living in isolation led Cruz-Zavala down a dark path during his formative years. "And he began to drink."

During the years of 2011 and 2017 when he was free from custody, Cruz-Zavala was convicted of five DUIs.

Three were misdemeanors. Two were felonies. In 2015, his brother fractured his wrist while he was driving, fell asleep and hit a pole driving home from San Bernardino County on Christmas Eve. Another time, he got drunk and fired off a gun, injuring his own knee.

No one other than himself and his brother was harmed, according to the public defender’s office.

He served his time for all the DUIs. The longest sentence was six months.

But in July 2017, ICE picked him up after the gun incident.

And he has been in federal detention ever since.

As far as her legal team knows, there is only one other detainee from Northern California who has been in detention longer than him, by just one month, Jorjani said.

Jorjani has tried to get the attention of higher-ups about this case. She emailed the office of then U.S. Senator Kamala Harris for help. Despite Harris’ office inquiry, there was no movement on the case.

She also enlisted the help of actress Diane Guerrero, who plays Maritza Ramos on the Netflix series, Orange is the New Black, and Lina on Jane the Virgin. Guerrero amplified Cruz-Zavala’s story on Twitter and Instagram live.  Both asked people to call ICE officials and the deportation officer at Mesa Verde, requesting his release to the rehab center.

Cruz-Zavala is also part of a documentary series produced by Shabnam Piryaei and a slideshow presentation by Roguemark Studios.

And at the highest political level, Jorjani and her client are hopeful that the Biden-Harris administration will somehow hear of Cruz-Zavala’s story, and allow him to fight deportation from an Oakland rehabilitation center, instead of as a locked-up detainee.

On his first day of office, Biden changed the immigration enforcement policies of the United States. The new acting secretary of Homeland Security said the federal government should focus its efforts on deporting people convicted of "aggravated felonies. Cruz-Zavala has never been convicted of such a felony.

"Everyone makes mistakes. Some are big and other ones. At the end of the day, we are human beings. We all deserve a second chance."

Activists have been hoping to "Free Walter" and amplifying his voice on social media. Art: Angelica Isai Beccerra

Meanwhile, his mother, Lucia Cruz-Zavala, who was laid off as a custodian at a gym during the pandemic, and his sister, Flor Cruz, 22, a student, live in Oakland. And they are cautiously hopeful that the young man who always remembers to call and write them on their birthdays will be set free from his cell.

But they’ve been down this road before.

His mother said quietly in Spanish that she is putting her trust in God that the people vested with releasing her son will have better luck this time around.

Both Mom and sister are more than willing to support for Cruz-Zavala, despite all the years that have kept that apart.  And when they visit, it’s always behind glass.

"It’s really hard around special occasions," his sister said. "Like birthdays, and Christmas and Thanksgiving. Walter is the only one not there." 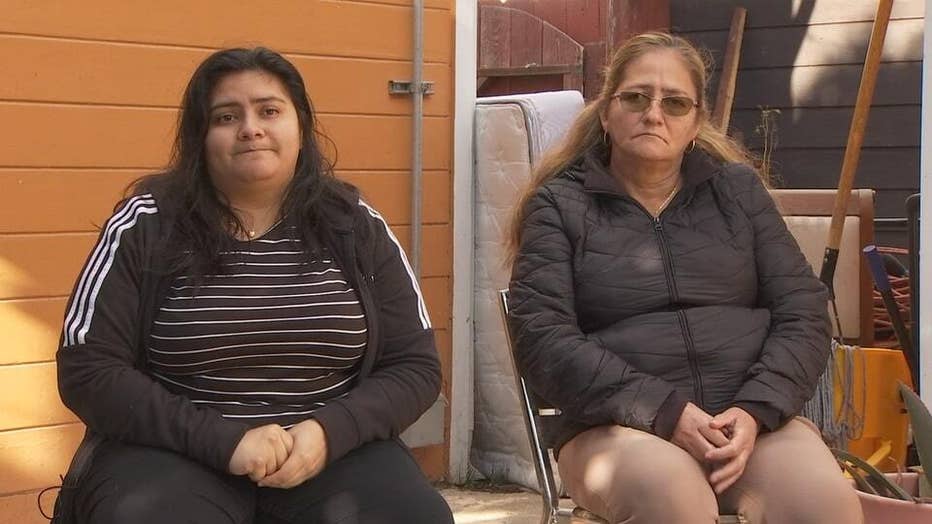 Flor Cruz, 22, and her mother, Lucia Cruz-Zavala, hope for their loved one's release to their Oakland home.

Cruz-Zavala said he longs to be reunited with his family in person.

He said he wants to get treatment for his years of trauma, be a better father to his young son and someday become employed in what he loves doing: art.

His work is now being displayed at a Bakersfield art gallery about a mile from the detention center. The organizers of the "Voices from the Shadows" exhibit, Elizabeth Spavento and Jared Haug, met Cruz-Zavala through a letter campaign and are showing his work along with the art of others, to highlight the fact that these men behind bars are real human beings, as well as talented artists.

Whatever he does, Cruz-Zavala said he would also definitely stay out of any trouble. He will do anything to not be sent back to El Salvador.

"My life will be compromised over there," he said.

As for whether he is a danger to those in the United States?

"If anyone asks me that, I would ask them a question to answer that question," he said. "Have they ever made a mistake in their life? Everyone makes mistakes. Some are big and other ones. At the end of the day, we are human beings. We all deserve a second chance."