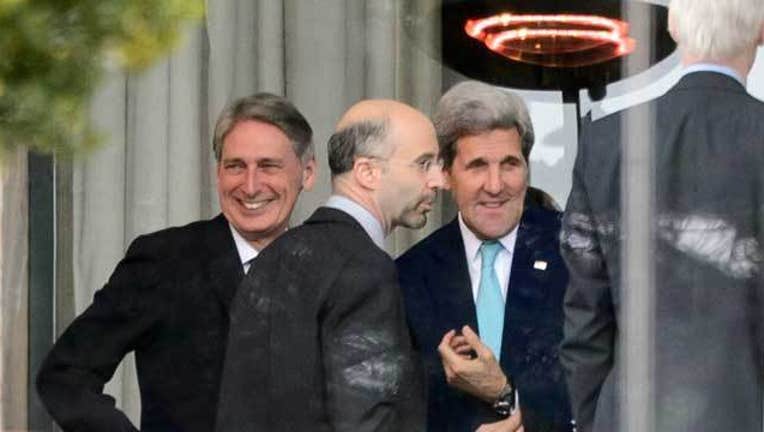 LAUSANNE, Switzerland (AP) — Negotiations over Iran's nuclear program headed for double overtime on Wednesday, beset by competing claims and recriminations after differences forced diplomats to abandon their March 31 deadline for the outline of a deal.

U.S. Secretary of State John Kerry postponed his departure from the talks in the Swiss town of Lausanne for a second time and will remain until at least Thursday morning to continue negotiations, the State Department said. On Thursday, the latest round of talks will hit the weeklong mark with diplomats from the five permanent members of the U.N. Security Council and Germany scrambling to reach a framework accord with Iran.

"We continue to make progress but have not reached a political understanding," spokeswoman Marie Harf said in announcing Kerry's decision.

German Foreign Minister Frank-Walter Steinmeier said negotiators were still facing a "tough struggle," indicating the talks were not likely to end anytime soon. "Tonight there will be new proposals, new recommendations. I can't predict whether that will sufficient to enable an agreement to be reached," he said.

At the same time, Iranian Foreign Minister Mohammed Javad Zarif accused his country's negotiating partners, particularly the U.S., of having "defective" political will in the talks.

The negotiators' intention is to produce a joint statement outlining general political commitments to resolving concerns about the Iranians' nuclear program in exchange for relief of economic sanctions against Iran. In addition, they are trying to fashion other documents that would lay out in more detail the steps they must take by June 30 to meet those goals.

But Iran has pushed back not only on the substance of the commitments the sides must make but to the form in which they will make them, demanding that it be a general statement with few specifics. That is politically unpalatable for the Obama administration which must convince a hostile Congress that it has made progress in the talks so lawmakers do not enact new sanctions that could destroy the negotiations.

Zarif said the result of this round of talks "will not be more than a statement."

A senior Western official pushed back on that, saying that nothing about a statement had been decided and that Iran's negotiating partners would not accept a document that contained no details. The official was not authorized to speak to the negotiations by name and spoke on condition of anonymity.

Deputy Iranian Foreign Minister Abbas Araghchi named differences on sanctions relief as one dispute — but also suggested some softening of Tehran's long-term insistence that all sanctions on his country be lifted immediately once a final deal takes effect.

He told Iranian TV that economic, financial, oil and bank sanctions imposed by the U.S., the European Union and others should be done away with as "the first step of the deal." Alluding to separate U.N. sanctions he said a separate "framework" was needed for them.

Araghchi has spoken of a similar arrangement before. But both Supreme Leader Ayatollah Ali Khamenei and Iranian President Hassan Rouhani have since demanded full and total sanctions lifting, and the floating of the approach now suggested an Iranian shift.

The U.S. and its negotiating partners want to crimp Iranian efforts to improve the performance of centrifuges that enrich uranium because advancing the technology could let Iran produce material that could be used to arm a nuclear weapon much more quickly than at present.

The additional documents the U.S. wants would allow the sides to make the case that the next round of talks will not simply be a continuation of negotiations that have already been twice extended since an interim agreement between Iran, the United States, Russia, China, Britain, France and Germany was concluded in 2013. President Barack Obama and other leaders, including Iran's, have said they are not interested in a third extension.

But if the parties agree only to a broad framework that leaves key details unresolved, Obama can expect stiff opposition at home from members of Congress who want to move forward with new, stiffer Iran sanctions. Lawmakers had agreed to hold off on such a measure through March while the parties negotiated. The White House says new sanctions would scuttle further diplomatic efforts to contain Iran's nuclear work and possibly lead Israel to act on threats to use military force to accomplish that goal.

Israeli Prime Minister Benjamin Netanyahu, who has campaigned tirelessly for months against the emerging agreement, said it would "ensure a bad deal that would endanger Israel, the Middle East and the peace of the world."