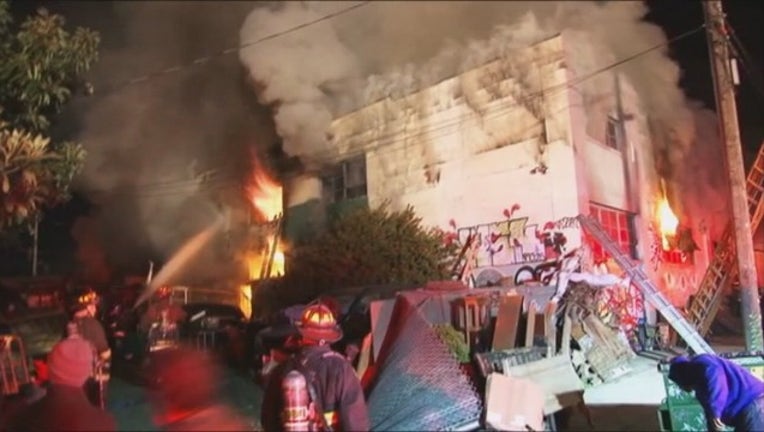 OAKLAND (BCN) - The judge in the case of Ghost Ship master tenant Derick Almena and creative director Max Harris for the fire at the warehouse in Oakland in 2016 that killed 26 people said on Friday that she won't allow cameras in her courtroom during their trial.

Alameda County Superior Court Judge Trina Thompson said that before she held a hearing on the matter Friday morning she had prepared a tentative order that would have allowed a single unmounted pool video camera to film opening statements, closing arguments and the jury's verdict in the trial, which is scheduled to begin on April 2 with hearings on various motions.

But Thompson said she changed her mind and decided not to allow cameras at any time when she learned that all the attorneys in the case now oppose having cameras in the courtroom.

At a hearing last week prosecutor Autrey James and Almena's lawyer Tony Serra both said they oppose cameras but Tyler Smith, one of Harris' lawyers, said he favors allowing cameras in the courtroom because he said media attention is important to rectify what he alleged are "false narratives
being put out by the prosecution."

Smith said one of those narratives is the allegation that Harris blocked the back stairs at the warehouse, which made it harder for people to escape the fire, but he said that's not true.

However, Curtis Briggs, Harris' lead attorney, who wasn't present last week because he had a hearing in another case, said on Friday that he opposes allowing cameras in the courtroom because he fears that even though jurors will be warned not to watch television coverage of the case they may still be influenced by "snippets or sound bytes" of the prosecution's opening statement.

Briggs said ordering jurors not to watch media coverage of a case "is outdated in modern times" because they may be exposed to such coverage through social media sites.

He said, "Jurors could be conditioned and programmed to the prosecution's side of the case."

In addition, Smith said he opposes cameras in the courtroom "for the sake of the victims' families, loved ones and friends."

Serra said allowing cameras in the courtroom "is fraught with danger" and "I worry it will influence the jury."

Thompson said her tentative ruling had sought to balance the right of Almena and Harris to have a fair trial with the news media's right to have access to the case.

But she said she will go along with the request by all of the attorneys and bar cameras from her courtroom, although reporters and the public will be allowed to attend the trial.

Thompson said, "The right to use cameras in the courtroom is not codified in case law."

The parties in the case will return to court on March 15 to deal with various procedural matters and on March 22 Thompson will hold a full day of arguments on the defense's request to dismiss the charges against Almena and Harris on the grounds that potentially exonerating evidence was destroyed, lost or altered under the watch of prosecutors.

Thompson indicated on Friday that the trial is expected to be lengthy, as she talked to the attorneys in the case about their availability the last week of August.