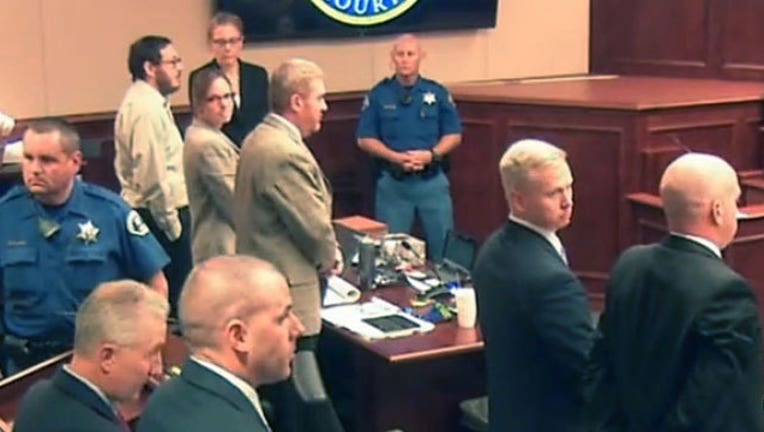 CENTENNIAL, Colo. (AP) — Colorado theater shooter James Holmes was convicted Thursday in the chilling 2012 attack on defenseless moviegoers at a midnight Batman premiere after jurors swiftly rejected defense arguments that the former graduate student was insane and driven to murder by delusions.

The 27-year-old Holmes, who had been working toward his Ph.D. in neuroscience, could get the death penalty for the massacre that left 12 people dead and dozens of others wounded.

The initial phase of Holmes' trial took 11 weeks, but jurors needed only about 12 hours over a day and a half to find him guilty on all 165 counts.

The same panel must now decide whether Holmes should pay with his life. Starting Wednesday, they will hear what is expected to be a month's worth of testimony over whether Holmes deserves the death penalty.

For almost an hour, Judge Carlos A. Samour Jr. read charge after charge, reciting the name of the victim, the offense and the word "guilty." Dressed in a blue shirt and khakis and flanked by his public defenders, Holmes stood impassively with his hands in his pockets the whole time.

The rest of the courtroom was bursting with emotion. Even before the verdict was read, jurors passed around a box of tissues and dabbed their eyes. The foreman attended Columbine High School during the 1999 shooting there that left 13 dead.

When Samour read the first finding — that Holmes was guilty of first-degree murder for killing 26-year-old Jonathan Blunk, a father of two who died throwing himself in front of his girlfriend to shield her from the barrage — numerous victims' families burst into sobs, trying to stifle the noise by pressing tissues to their noses and mouths.

"As soon as you heard the first guilty, we knew all the dominoes were about to fall," said Tom Sullivan, whose son Alex was killed.

When Samour read the name of another murder victim, Jessica Ghawi, her mother, Sandy Phillips, silently mouthed "yes," and her husband wrapped his arm around her to pull her close.

"We're very happy this animal, this monster, will never see the light of day," Phillips said later outside court. "It feels good to have this weight off our backs."

Holmes' parents, Arlene and Robert, sat silently holding hands throughout the verdicts. After the final count was read, Arlene buried her face in Robert's shoulder.

The verdict came almost three years after Holmes, dressed head to toe in body armor, slipped through the emergency exit of the darkened theater in suburban Denver and replaced the Hollywood violence of the movie "The Dark Knight Rises" with real human carnage.

His victims included two active-duty servicemen, a single mom, a man celebrating his 27th birthday and an aspiring broadcaster who had survived a mall shooting in Toronto. Several died shielding friends or loved ones.

The trial offered a rare glimpse into the mind of a mass shooter, as most are killed by police, kill themselves or plead guilty.

Prosecutors argued that Holmes knew exactly what he was doing when he methodically gunned down strangers in the stadium-style theater, taking aim at those who fled. They painted him as a calculated killer who sought to assuage his failures in school and romance with a mass murder that he believed would increase his personal worth.

He snapped photos of himself with fiery orange hair and scrawled his plans for the massacre in a spiral notebook he sent his university psychiatrist just hours before the attack, all in a calculated effort to be remembered, prosecutors said.

The prosecution called more than 200 witnesses over two months, more than 70 of them survivors, including some who were missing limbs and using wheelchairs. They recalled the panic to escape the black-clad gunman.

The youngest to die was a 6-year-old girl whose mother also suffered a miscarriage and was paralyzed in the attack. Another woman who was nine months pregnant at the time described her agonizing decision to leave her wounded husband behind in the theater to save their baby. She later gave birth in the same hospital where he was in a coma. He can no longer walk and has trouble talking.

That Holmes was the lone gunman was never in doubt. He was arrested in the parking lot as survivors were still fleeing, and he warned police he had rigged his nearby apartment into a potentially lethal booby trap, which he hoped would divert first responders from the theater.

His attorneys argued that Holmes suffers from schizophrenia and was in the grip of a psychotic breakdown so severe that he was unable to tell right from wrong — Colorado's standard for insanity. They said he was delusional even as he secretively acquired the three murder weapons — a shotgun, a handgun and an AR-15 rifle — while concealing his plans from friends and two worried psychiatrists in the months before the shooting.

Defense lawyers tried to present him as a once-promising student so crippled by mental illness that he couldn't reveal his struggles to anyone who might have helped. They called a pair of psychiatrists, including a nationally known schizophrenia expert, who concluded Holmes was psychotic and legally insane.

But two state-appointed doctors found otherwise, testifying for prosecutors that no matter what Holmes' mental state was that night, he knew what he was doing was wrong.

Jurors watched nearly 22 hours of videotaped interviews showing Holmes talking in a flat, mechanical tone about his desire to kill strangers to increase his self-worth. Using short, reluctant answers, he said he felt nothing as he fired, blasting techno music through his earphones to drown out his victims' screams.

Prosecutors showed jurors Holmes' spiral notebook, where he scribbled a self-diagnosis of his "broken mind" and described his "obsession to kill" since childhood. The pages alternate between incoherent ramblings and elaborate plans for the killings, including lists of weapons to buy and diagrams showing which auditoriums in the theater complex would allow for the most casualties.

The jury saw an investigator's video of the shooting's aftermath. It showed bodies wedged between rows of seats and sprawled across aisles amid spent ammunition, spilled popcorn and blood.