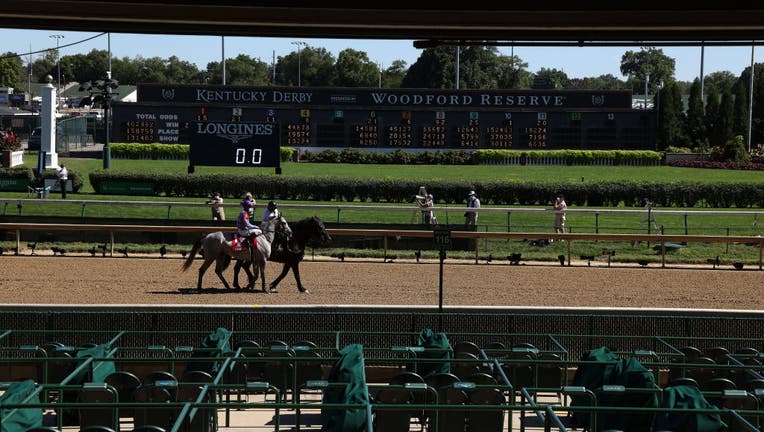 LOUISVILLE, KENTUCKY - SEPTEMBER 05: Drop Anchor, with Brian J. Hernandez, Jr. up, is walked toward the starter's gate prior to the Iriquois, an undercard race prior to the 146th running of the Kentucky Derby, at Churchill Downs on September 05, 2020

LOUISVILLE, Ky. (AP) - Authentic led all the way to win a Kentucky Derby unlike any other, kicking away from heavy favorite Tiz the Law in the stretch and giving Bob Baffert a record-tying sixth victory on Saturday after the trainer’s other entry was a late scratch.

Authentic won by 1 1/4 lengths without the usual crowd of 150,000 on hand at Churchill Downs because of the coronavirus pandemic. The bay colt ran 1 1/4 miles in 2:00.61 under John Velazquez, who earned his third Derby victory.

Sent off at 3-5 as the biggest Derby favorite in 31 years, Tiz the Law stalked Authentic on the outside before challenging at the top of the stretch. But Authentic found another gear and pulled away from the Belmont winner.

“Yes! Yes!” Baffert shouted in the paddock, where he watched the race on the video screen.

Baffert's other horse, Thousand Words, got spooked in the paddock, reared up and fell on his side shortly before post time. He was scratched by the veterinarians. Baffert said his assistant, Jim Barnes, was injured in the fall.

Tiz the Law had already won the Belmont, the kickoff to the reconfigured Triple Crown that was run in June at a shorter distance.

The day began with Churchill Downs stands empty and the wagering windows closed. Armored police vehicles in the parking lot have replaced throngs of Derby-goers in seersucker and showy hats.

The 146th Kentucky Derby is sure to be remembered as a surreal distillation of the crises facing the country in 2020. The race, usually in May, is four months late because of the coronavirus pandemic. Still no fans are allowed, so the fabled racetrack is mostly quiet. Multiple groups, including armed militias, are planning protests and counterprotests in the streets outside over police killings of unarmed Black Americans.

The Derby is unfolding in the hometown of Breonna Taylor, a Black emergency medical technician shot dead in her home in March when police burst in to serve a search warrant in the middle of the night. Demonstrators here have been protesting downtown for more than 100 days, calling for the officers involved to be prosecuted and the policing system dismantled.

RELATED: Medical experts concerned US not ready for COVID-19 vaccine

As the first race started Saturday morning, a group of self-described “patriots” marched through downtown as a counterprotest, many carrying assault rifles and campaign flags for President Donald Trump.

Several other groups are planning to march to the track Saturday afternoon before the marquee race is run, including an armed Black militia. The Louisville Metro Police Department said it is anticipating large-scale demonstrations near the track.

Wanda Martin lives across from the backside of Churchill Downs. Usually her lawn is a party, with food and music and dancing. Friends come from all over the county to visit. Martin grew up in the horse racing business. She worked for trainers, feeding and caring for the racehorses.

It is usually her favorite week of the year. She always sells T-shirts with sayings like “Talk Derby to me” and “Go Baby Go.”

The only thing she could come up with to put on her shirts this year was “2020 Worst Derby Ever.”

She hung them from a clothesline across the front of her lawn.

“We’ve had some good times,” she said. “This is just not Derby. I know it’s for our protection, but it’s not like Derby at all.”

Martin said she isn’t worried about the large-scale demonstrations planned for the neighborhood.

A few hours before the race, the street was filled with police officers, who were responding to a domestic situation in a house adjacent to the racetrack, unrelated to the protests. A man barricaded himself in his house, and police briefly closed the gates as they tried to coax him out.

Martin said it was just one more thing on a list of frustrations this year.

She knows she’s not the only one who feels that way. She’s sold 15 of her shirts.