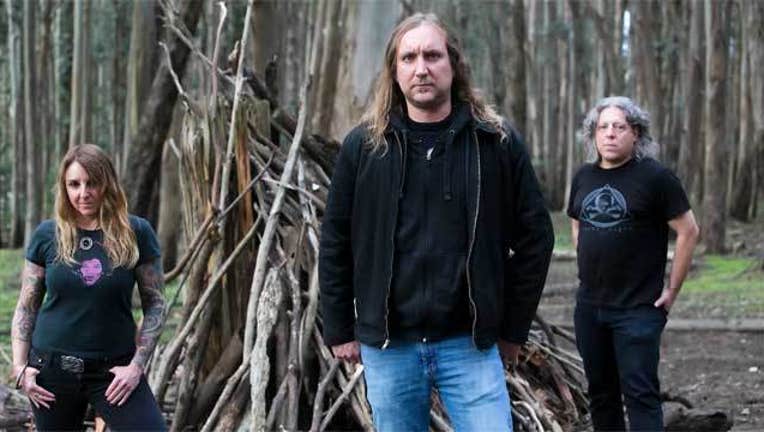 SAN FRANCISCO (KTVU) -- With a history that dates back to just after the early rise of such iconic stoner rock bands as Kyuss, Monster Magnet and the Bay Area's own Sleep, down-tuned drone merchants Acid King have been rattling sternums and punishing eardrums for over two decades.

Formed in 1993 by lead singer and guitarist Lori S., drummer Joey Osborne and bassist Peter Lucas (the first in a long string of rotating bassists), the power trio became one of the stalwarts of the San Francisco metal scene. Recording an EP and its debut album for the Sympathy for the Record Industry label before moving on to Frank Kozik's local Man's Ruin imprint later in the decade.

The band would refine its lumbering, hypnotic riff magic to new heights on the rumbling 1999 opus Busse Woods and their 2005 follow-up III for Small Stone Records. Acid King would go on hiatus for a time following that release, but invitations to perform at European festivals prodded the band back into activity. With Scorched Earth Policy guitarist Mark Lamb joining the band as its latest bass player, the trio began playing regular local shows and gradually got together for a new album.

This year, Acid King issued what may be the band's crowning achievement with the trio's first new album in a decade, Middle of Nowhere, Center of Everywhere on Svart Records. Adding psychedelic atmospheres to their signature monolithic riffs, songs like "Silent Pictures" and "Coming Down from Outer Space" take the listener on an interstellar journey unlike anything Acid King has produced in the past. KTVU.com spoke with Lori S. about the band's return to the studio to make the album.

KTVU.com: Ten years is a long time to wait between albums. Was the gap mostly just a matter of not concentrating on the band full time?

Lori S: Exactly. This record wasn't ten years in the making [laughs]. We made it in between marriages and divorces and layoffs and being sick of each other and not really playing for a while. Then we started getting these opportunities to go to Europe and it was a lot of fun to be able to travel there and we just didn't really put that much effort into songwriting.

We did here and there, but for whatever reason – I really couldn't pinpoint one particular reason why. I guess maybe me; blame myself – we were not feeling super creative. When you're in a band for 20 years, sometimes it's just hard to keep it up. The enjoyment of playing out live and enjoying the reason why you're in a band outweighs putting the time in at the studio to write stuff.

But I think through touring and going to Europe and the fans continually saying "When are you gonna put out a new record?" that really energized us to focus on writing some songs and putting out a record. And we got more serious about it and finally did it.

How did Mark end up in band as bassist after Rafa left to focus on Black Cobra?

Well, it wasn't exactly like that with Rafa moving on. Rafa was always kind of the fill-in guy. We never thought he'd be the permanent bass player forever, because he had Black Cobra. And once he started concentrating more on that, he wouldn't be able to do both. Actually, he probably could have, since Acid King doesn't play that much anyway. But it was never really that Rafa was the next bass player. He filled in because we had a situation where we needed someone right away and then he just ended up playing with us for a while, because he's awesome!

So what happened was, because of our numerous bass players, I was at a show at the Bottom of the Hill – I can't remember who it was; this was a long time ago – I remember Mark coming up to me and saying "Hey, if you guys ever need a bass player, let me know." Then after Guy [Pinhas, longtime bass player] left and Rafa stood in and helped us out, I remembered Mark.

I don't even remember how I found him, because it was like a year later, not a few weeks or a month. It was a long time. But I found him and he was still interested! So he came over and jammed with us and was freakin' awesome. We gave him the history of the bass players and why everybody left and where we were at and he ended up playing with us. Getting the benefit of all the hard work that Joey and I put in all of those years, Mark got to go on all those European tours [laughs]. But he's been in the band ever since and we love him. He's awesome and I'm so happy he did that.

Getting back to the  new album, were some songs written before he joined, or did you have some of the ideas for the songs before he was in the band?

I think some of those songs were in the riff crypt and I had them hovering around and they had a part or two. So I definitely had some things already in the works prior to Mark, just riffs that I'd collected. But once he came in the band, it was very organic. The way the songwriting is for me anyway is I'll have a couple of ideas and we'll jam on them, and through bass playing and just playing around will trigger other creative ideas that will help me write the song.

I'm not the type of person who writes an entire song and brings it in and says "Here's my song!" I don't do that. All our songs are written organically like that. So to answer the question, yes there were some riff prior to Mark joining, but the majority of them were things that came out through jamming.

I know you've recorded with Billy Anderson before, but given the length of time since III, was this the first time you worked at his studio in Portland? I wasn't exactly sure when he'd moved up north...

What happened was I wanted to do something different. Because we'd recorded every single record with Billy. On this one, I really wanted to try something different, and Joey is friends with Toshi [Kasai of the band Big Business and part of the production team Deaf Nephews with Melvins drummer Dale Crover] and we decided we were going to record with him. He came here to record us at Tiny Telephone; we were going to record here in San Francisco.

So we recorded a few songs with him – and he's awesome; I really love him – but I was missing having someone who is more interactive as far as ideas. I'm not a dictator. I'm not like "This is what I want. I want this sort of vocals and this kind of..." you know? I like the collaboration in the studio. And because we didn't really know each other and hadn't worked together in the past, I wasn't feeling that.

We recorded a couple of songs with him that we still have on the record and I called up Billy. And I was like, "Billy? Could you finish the record?" I felt bad, because he wasn't the person I'd initially asked, right? And I had to call him up and say "Hey..." But he was super awesome and totally understood. So he finished the rest of the record. I flew him down and we recorded at Sharkbite and mixed at Different Fur. And he finished the tracks that Toshi had initially recorded and mixed  everything. So I guess in the end, I cannot live without my Billy Anderson.

Ok. I saw some photos on Facebook of you guys up in Portland, so I thought maybe you had recorded it up there...

No, everything was recorded in the Bay Area.

I've always thought of Acid King as a pretty earthy band, but this album has elements that remind me of more spiritually minded doom like Yob or Om. I'm not sure if it's the lyrics or the music coming across as more psychedelic. In the press release, there's a quote where you describe the album's sound by saying it "still feels like riding motorcycles on Quaaludes." To me, I'd say it sounds more like flying spaceships on Quaaludes. Did you try to push things in a different direction?

I did. It's always going to sound like Acid King. It's like the Ramones or AC/DC; they're always going to sound the same. But I did definitely want to progress a little bit into more atmosphere and ambiance. And less "Oh, we're so heavy! Let's play really slow and heavy." I don't need to do that anymore. I need more than that. We've evolved and it can't just be about that anymore.

I like how "Intro" and "Outro" were the same song that you just split to bookend the album. How did you come up with that idea?

I originally had these riffs that we'd played throughout the years, but I couldn't fit them into a song. We kept trying to cram them into parts and make songs out of them and we could never really come up with anything. I really wanted to use them. I was determined to have these on the record somehow. So that's how it came about. I said "Hey, why don't we have this intro/outro?" We started with the intro, and I thought "Well, let's do the outro!" It wasn't ever planned. It just happened because I couldn't figure out what to do with those riffs.