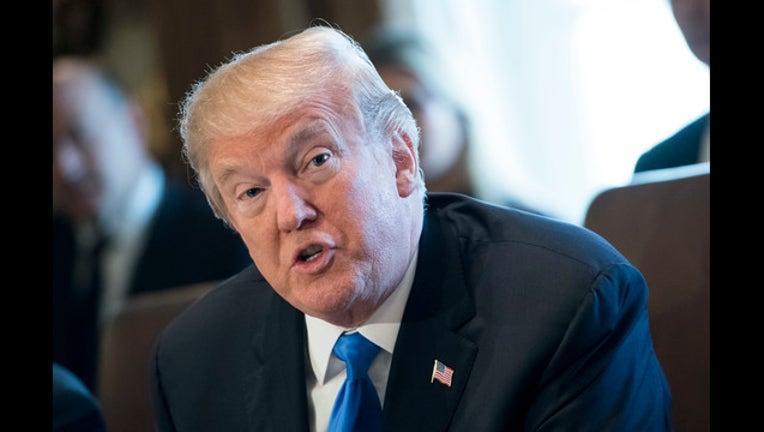 US President Donald Trump speaks to the media during a Cabinet meeting at the White House on December 6, 2017 in Washington, D.C. (Photo by Kevin Dietsch-Pool/Getty Images)

SALT LAKE CITY (AP) -- A flurry of lawsuits challenging President Donald Trump's decision to chop up two large national monuments in Utah could finally bring an answer to the much-debated question of whether presidents have the legal authority to undo or change monuments created by past presidents.

Until that question is answered months or years from now, the fate of the contested lands in Bears Ears and Grand Staircase-Escalante national monuments will remain unresolved.

Proclamations signed Monday by the president allow lands no longer protected as a national monument to be opened up in 60 days to mining, but conservation and tribal groups will likely try to keep that from happening.

Mark Squillace, professor of natural resources law at the University of Colorado-Boulder, said he doubts the federal government would permit mining so quickly after Trump's announcement because it would be bad politics, especially as the legal battle mushrooms.

Outdoor retail giant Patagonia joined the lawsuits Wednesday, filing one on behalf of several other organizations to block Trump's reductions to Bears Ears. The California-based company said in the lawsuit that Trump's proclamation shrinking the monument by 85 percent exceeds the president's authority and strips much-needed protections from sacred tribal lands.

Patagonia also replaced its usual home page with a stark message, "The President Stole Your Land."

The post drew a strong rebuke from Interior Secretary Ryan Zinke who called it "nefarious, false and a lie."

Three lawsuits already had been filed involving Utah's monuments. And more are expected -- especially if Trump follows Zinke's recommendations to shrink two other monuments -- Gold Butte in Nevada and Cascade Siskiyou in Oregon.

Supporters of Trump's move welcomed the fight, saying it will answer longstanding questions about presidential power involving the protection of land.

"Hopefully, we can have some closure on what the president can and cannot do," said Mike Noel, a Republican state representative in Utah who was on stage with the president during his proclamation signing in Salt Lake City.

Past presidents have trimmed national monuments and redrawn their boundaries 18 times, according to the National Park Service

Legal experts disagree on whether the 1906 Antiquities Act -- allowing presidents to create a monument -- also lets them reduce one.

The question has never been settled in court, but conservation and paleontology groups and Native American tribes launching lawsuits are preparing to argue that Trump doesn't have that authority and his move jeopardizes a wealth of Native American artifacts, dinosaur fossils and rugged spaces.

"Gee whiz, it sounds like there are going to be a lot of attorneys making a whole lot of money," quipped Noel. "For every organization, there's a lunch ticket for a group of attorneys to exist."

Noel plans to intervene himself, filing a court brief to show support for the president's actions.

Donald Kochan, a professor of natural resources, property and administrative law at Chapman University in Orange, California, believes Trump's action is likely legal and the separate lawsuits allow each group to show supporters they're speaking up.

Squillace said the lawsuits will likely be merged into one case for each monument.

He thinks a court will try to focus on the overall question of whether Trump has the authority to reduce the monuments -- something Squillace doesn't think the president has the legal authority to do.

While the legal battles play out, Utah Republican Rep. Rob Bishop, chairman of the House Natural Resources Committee, has introduced a bill that would prevent presidents from designating monuments larger than 85,000 acres and give states and local officials the power to veto a monument larger than 10,000 acres.

Bishop's bill is awaiting a vote on the House floor.
------
Associated Press writer Matthew Daly in Washington contributed to this report.