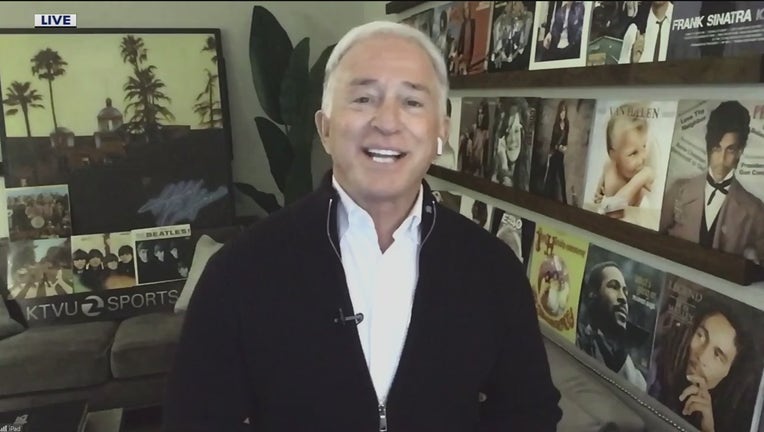 KTVU sports director Mark Ibanez on his final night of broadcasting remotely from the vinyl room.

OAKLAND, Calif. - "Music was my first love before sports. I was a Beatlemaniac," says KTVU's sports director Mark Ibañez.

That's no surprise to viewers who relished Ibañez's broadcasts during the pandemic from his record-lined man cave, better known as the "Vinyl Room."

After nearly 43 years, much like a needle riding the groove to a record’s edge, Mark's spin at KTVU is coming to an end. He's leaving the station this week, but as he reflects on this peculiar timing and the world's uncertainties, he's proud of this reinvigorated and reinvented bond through music with his audience. The Vinyl Room after all is an extension of his personality.

When the lights and camera turn on, viewers who catch a glimpse of the Vinyl Room almost get to play a fun game with his veritable jukebox of smash hits that show his eclectic taste. What’s he going to display? What albums might you recognize?

SEE ALSO: A remarkable career: KTVU's Mark Ibanez to sign off one last time after 43 years

In March 2020, he was very wrong, as many were, when he thought the pandemic lockdown would only entail talking about sports from home for a couple of weeks. Instead, reports from living rooms and other intimate spaces became the norm for more than a year. For some viewers, it showed that we were resilient and could adapt under extreme circumstances. Ibañez took it to heart.

"If I’m going to be doing this, I take a lot of pride in setting up a professional space that speaks to my personality," he said. "I wanted something that looked fun and professional. I love music."

And it shows. He seems to have it all, but by his official count, there are approximately 500 long play records in his collection. He's displayed The Eagles’ ‘Hotel California’, Etta James, Michael Jackson’s ‘Off the Wall’, E-40, Dolly Parton, Maxwell, Madonna, Keb’ Mo’, Pink Floyd, Nas, Lionel Richie, Stevie Nicks, The Rolling Stones, Ray Charles, and of course, his favorites: The Beatles.

"I was like a DJ. People would request particular albums on my wall."

In a previously aired segment about the Vinyl Room's mystique, he said his mom waited two hours in line at a small San Rafael record store in 1967 to buy him a copy of The Fab Four’s psychedelic masterpiece, ‘Sgt. Pepper’s Lonely Hearts Club Band’. That’s one album he always has on display.

He recalls how they made their television debut on The Ed Sullivan Show when he was in the 4th grade. He said he told his mom to call him inside when the Beatles came on. He considers that a defining moment growing up that showed him there was, "something bigger in the world than [his] San Rafael backyard."

Like many others from his generation, the Beatles, led to the Stones, which led to the Doors and so on. That was the beginning of his collection that skewed towards what would eventually get labeled, classic rock. He says the scratchy vinyl sounds bring up so many memories.

"It was about four years ago, my 94-year-old mom was cleaning out her house's attic and garage and asked, ‘What do you wanna do with the albums?’" He thought, "Damn, it would look cool to frame these or put them on the wall. I started to buy new vinyl."

He’s not alone. Vinyl's resurgence has been a long-time coming. Once an almost obsolete format, a recent report shows an astonishing increase in U.S. vinyl record sales from 21.5 million in 2020 to 41.7 million in 2021. For many, deep listening was a major mood during pandemic times and vinyl may be more conducive to being consumed that way.

Now he frequents a couple of record stores in Napa, including Right On!!! Records, where the motto is, "There’s no such thing as a bad record." Serendipitously, his man-cave room was built and finished about a month before COVID-19 reached the U.S. and forced the lockdown.

The feedback was immediate. "I’d get five or six people who emailed to ask for a video of what the Vinyl Room looked like, how I built the shelves. It was mind-boggling to me," he said.

"People would make requests and comment on how I would decide [what goes on the walls]," Ibañez said "I was like a DJ. People would request particular albums on my wall."

For those paying close attention, Ibañez confirms his rotating arrangement of albums was based on musicians in the news, their notable birthdays, and untimely deaths.

He’d tribute Elton John’s tour announcement, the anniversary of Prince’s death, and the passing of Eddie Van Halen. "If there was something I’d missed, I’d get criticism," Ibañez said.

One of those critics was a musician with Bay Area ties. Ibañez says he received an unexpected package from UPS. He was shocked to open it. It was four Tim McGraw LPs with a note, "More country on the Vinyl Room wall!" McGraw’s father, Tug McGraw, was a former baseball relief pitcher from Vallejo.

And that’s not the only swag he’s received. Over the past two years, he estimates viewers have sent him about 100 albums he’s added to his collection.

"The coolest thing about it is, all the records they sent all came with a story on why it was important to them," Ibañez said.

There's a close relationship between sports and music, not all of it praiseworthy. Remember the old ‘Jock Jams’ compilation series albums with anthems by Gary Glitter?  Or how Queen’s "We Are the Champions" has by now become a sports-entertainment cliché?

KTVU sports director Mark Ibanez sits down for an interview as he's set to retire after 43 years at the station. He talks about the Bay Area's golden age of sports, how he became interested in the subject, and his first sports idol, Willie Mays.

On a local level, Mark recalls how Kool & The Gang’s "Celebration", "just became a thing," with the Oakland A’s at some point. Similarly, Golden State Warriors used the Rolling Stones’ ‘80s hit, "Start Me Up" to get the crowd going.

"In my job, I’ve had the opportunity to meet so many musicians. They always want to talk about sports and I wanna talk about music. There’s an intrinsic connection there." As a kid, he learned sports exemplified external uncontrolled emotions. But it was music, and for him, lyrics by the likes of Bob Dylan and Jackson Browne, that honed in on untapped cerebral content.

"That helped connect me to other emotions – untapped an avenue of understanding my own emotions – a visceral feeling," Ibañez said. "Music gives goosebumps, melancholy. Sports is more of a raw emotion."

He notes the KTVU demographic is probably closer to his age; perhaps part of the reason so many got a kick out of his classic-rock collection. But on the flip side, he says some of his veteran colleagues had extra time over the last two years to reflect on their own lives and careers and on what’s important. For Ibañez, "getting to stay home and be with family" was something he learned to appreciate in a whole new way.

In his own words, his renewed bond with the viewers is something that goes beyond wins and losses. It’s something he considers, "an absolute career highlight." And with that, he can truly retire to the Vinyl Room and listen to the same Magnavox record player his parents bought in 1964, the one he’s changed the needle on at least a dozen times, play a scratchy memory and make some new ones.