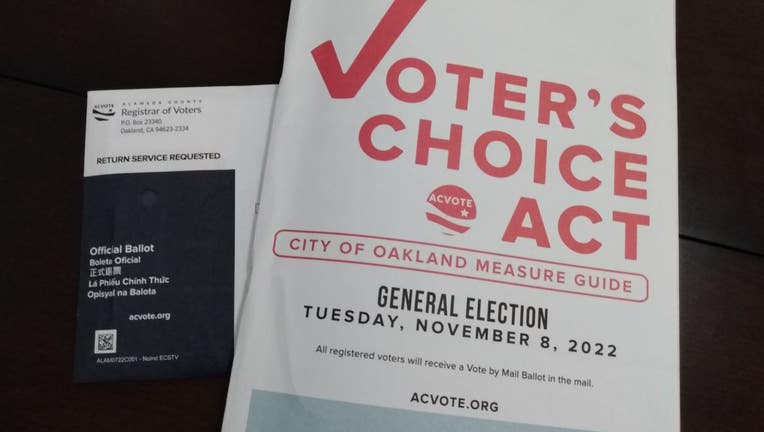 Official ballot and the official voter guide to measures in Oakland, Calif., in the November 2022 election. (Keith Burbank/Bay City News)

OAKLAND, Calif. - A measure on the ballot this November in Oakland seeks to give the city authority to develop, build, acquire or help develop up to 13,000 low-rent housing units in the city.

City Councilmember Carroll Fife introduced a resolution in May to place Measure Q on the ballot. In June, the resolution passed the City Council by a unanimous vote. Fife ran for City Council in part on advocating for housing as a human right and as a founding member of Moms 4 Housing.

Fife's resolution says, "Access to low and very low-income housing is critical to ensuring that a growing number of Oakland residents are not plunged into homelessness."

More than 5,000 people are living homeless in Oakland on any given night, according to the latest count. Unhoused residents are moved by police and California Highway Patrol officers from place to place.

That is happening as the city builds more than the required number of market rate housing units and falls short of its goal to build below-market rate units.

Measure Q would only authorize Oakland officials to somehow create more low-rent housing. Measure Q does not approve any specific project or provide funding for the up to 13,000 units.

No one submitted an argument in favor of the measure.

Opposed is the Alameda County Taxpayer Association, which said in part, "This is part of the continual City tactic of going to the taxpayers for more money for basic government services, such as streets and libraries, while spending billions of taxpayer dollars on projects like a new baseball stadium for the billionaire owner of the A's."

Oakland already provides grants and loans to organizations that develop affordable housing in the city. Most of the organizations are non-profit groups, which in many cases own and manage the developments.

In a few cases, the affordable housing developments are owned and managed by the city. The up to 13,000 units authorized by Measure Q would be "social housing," which by definition would accommodate low-income, very low-income and extremely low-income residents.

Measure Q requires a majority of Oakland voters to say "yes" for the measure to pass.