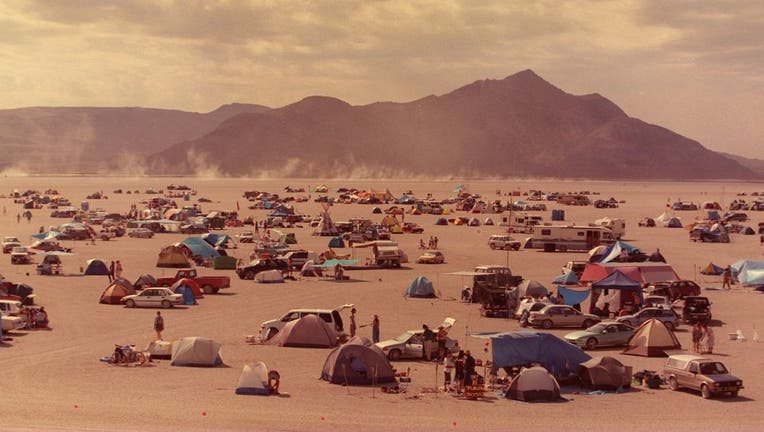 Some 4500 people gathered in the Black Rock Desert of Northern Nevada for the burning man celebration. People camped right out o the desert playa.

RENO, Nev. - The cancellation of Burning Man for the second year is drawing mixed reaction in northern Nevada, where some businesses and tourism officials say they’ll miss the economic boost from festival-goers but health officials are glad they won’t contribute to increasing the risk of spreading COVID-19.

The counter-culture festival in the Black Rock Desert about 100 miles north of Reno typically attracts nearly 80,000 people who spend an estimated $63 million in Nevada.

Officials at Reno-Tahoe International Airport are among those who were hoping the event would return at the end of August after last year’s cancellation due to the pandemic.

"Let’s face it, our world needs Burning Man right now. If you want to celebrate coming out of a pandemic, Burning Man is perfect," airport spokesman Brian Kulpin said.

"We missed them last year, and we’ll miss them again this year," he told the Reno Gazette Journal.

Health officials’ concerns were based in part on the fact event attracts people from all over the world in places with wide varieties of COVID-19 cases, vaccination rates and virus variants.

"I’m sure it was a difficult decision to cancel Burning Man this year, but I do feel that in terms of safety of the general public and lowering the risk of COVID-19 transmission, that the right call was made," said Kevin Dick, district health officer for Washoe County.

Dick said health officials are seeing outbreaks of COVID-19 in a number of countries, "areas where very contagious COVID-19 variants of concern are prevalent and where low rates of vaccination are occurring."

Janet Davis, chairwoman of Pyramid Lake Paiute Tribe, shared those concerns because most Burners pass through the tribe’s reservation to get to the desert playa.

"We’re trying to protect our people, and that influx of people would be a risk to our tribe," Davis said.

Davis said that after talks earlier this year with Burning Man organizers, she was convinced the event was moving forward. She thinks that recent drops in vaccination rates, and the unknowns with attendees coming from out of the country, likely led to the cancellation.

"It’s a mixed blessing," said Davis, who noted that tribal businesses will miss the seasonal boost in revenue.

Many Reno businesses — from hardware stores to grocers — see their best revenue reports in August due largely to Burning Man, but most local businesses seem to understand the decision.

Lisa Martin manages Melting Pot World Emporium, an eclectic boutique in Midtown that caters to Burners’ needs for all things fuzzy and colorful.

For several years, the shop has shifted from relying on Burners anyway, since many of them shop online.

"We carry more home décor and incense and a lot of sage," Martin said.

Despite the official event’s cancellation, at least one community, Gerlach, is planning on welcoming Burners en masse.

About 3,000 to 5,000 Burners assembled last year on the Black Rock Desert playa to celebrate. They brought a number of art installations, art cars and even a few makeshift effigies of the "Man." Some endearingly called the gathering "Not Burning Man."

Gerlach, a town of about 100 on the outskirts of the playa, is the last stop for amenities, limited though they may be. The town’s few businesses make the most of their annual income from the month leading up to Burning Man, and the month after.

While last year couldn’t match the revenue made during the actual event, the unofficial Burners provided at least some financial cushion.

Last year, Burning Man organizers, to an extent, discouraged any gathering in the desert. But this year they acknowledged that many would head to the playa for a celebration. They reminded people that they needed to be self-reliant.

Officials with the Bureau of Land Management, which typically oversees Burning Man, also said they had no special plans on site for the week of the now-canceled event. Last year, a number of law enforcement officials patrolled the area, mainly in an effort to prevent people from burning any structures.

Back in Reno, people-watchers at the airport will have to wait another year for the parade of colorfully clad festival-goers who typically pique their curiosity.

Kulpin said he gets a kick out of watching the reactions of other travelers.

"A couple of times, I’ve watched someone wearing a navy or black suit and they see someone coming back from the playa covered in dust," he said. "You can see the anxiety in their eyes of, ‘Oh man, I hope I’m not sitting next to that person.’"