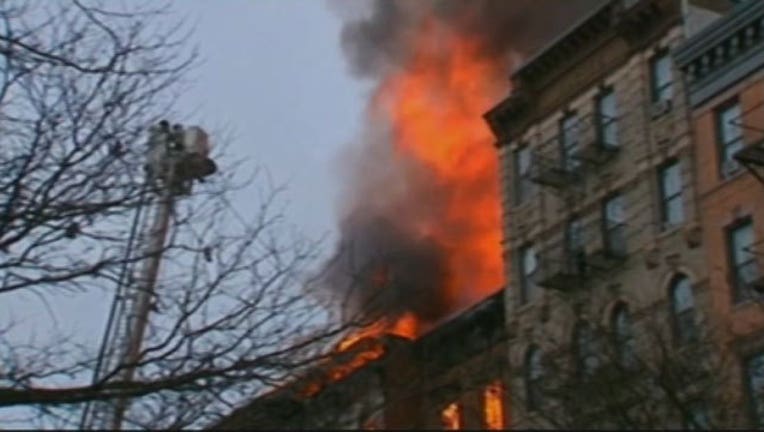 NEW YORK (KTVU-AP) -- An apartment building collapsed in a fiery burst of rubble on Thursday and flames spread to nearby buildings in what officials said appeared to be a gas-related explosion, injuring at least a dozen people and scattering debris across surrounding streets in the heart of Manhattan's trendy East Village.

Mayor Bill de Blasio said the blast appeared to have been caused by plumbing and gas work inside one building. Inspectors from utility Con Edison had been there to check on a planned gas meter installation about an hour before the fire, but they decided the building wasn't ready for gas to be introduced, company President Craig Ivey said.

Orange flames billowed and smoke could be seen and smelled for miles after the blaze, in an area of old tenement buildings that are home to students and longtime residents in an area near New York University and Washington Square Park.

About 250 firefighters converged to fight the flames, and the fire department's commissioner said a second building was "in danger of possible collapse" and four buildings were affected in all.

Firefighters said at least 12 people were hurt, three critically, some with burns to their airways. De Blasio said it didn't appear that anyone was missing.

"We are praying that no other individuals are injured and that there are no fatalities," he said.

The fire happened a little over a year after a gas explosion in a building in East Harlem killed eight people and injured about 50. De Blasio noted that no one had reported a gas leak to authorities before Thursday's blast.

The area was evacuated, and the city's health department advised residents to keep their windows closed because of the smoke.

Adil Choudhury, who lives a block away, ran outside when he heard "a huge boom."

"Already there was smoke everywhere" when he saw the building, he said. "The flames were coming out from the roof. The fire was coming out of every window."

Items from a ground-floor sushi restaurant were blown into a street, and the explosion was so forceful that it blew the door off a cafe across the avenue. Rubble, glass and debris littered sidewalks.

Area resident Paul Schoengold said he was walking about two blocks away when he heard an "incredibly loud" roar.

"Then the fire started. I could see the flames on the roof, and they kept getting higher," shooting perhaps 50 feet into the air, he said.

As freelance photographer Michael Seto ran up to the buildings after hearing the explosion in his apartment a block and a half away, flames were spreading and engulfing one building's first floor.

Meanwhile, a man was climbing up the fire escape, not down, he said.

"People were calling to him that the building's on fire — he needs to get down," and he did, Seto said.

Other witnesses said a woman scrambled down her fire escape in the moments after the explosion. She stopped on the second floor, afraid to go further, and passers-by climbed up to help get her down.

In the aftermath, one person was lying on the ground, being attended to by two to three passers-by who were holding his head still, Seto said. A woman was sitting on the curb with blood coming down her face, and another woman walked past him with blood on her face, he said.