The Ghost Ship warehouse in Oakland was the scene of a tragic fire that claimed 36 lives four years ago. The building was never properly inspected by the fire department. Progress on fixing the city's inspection system has been slow. 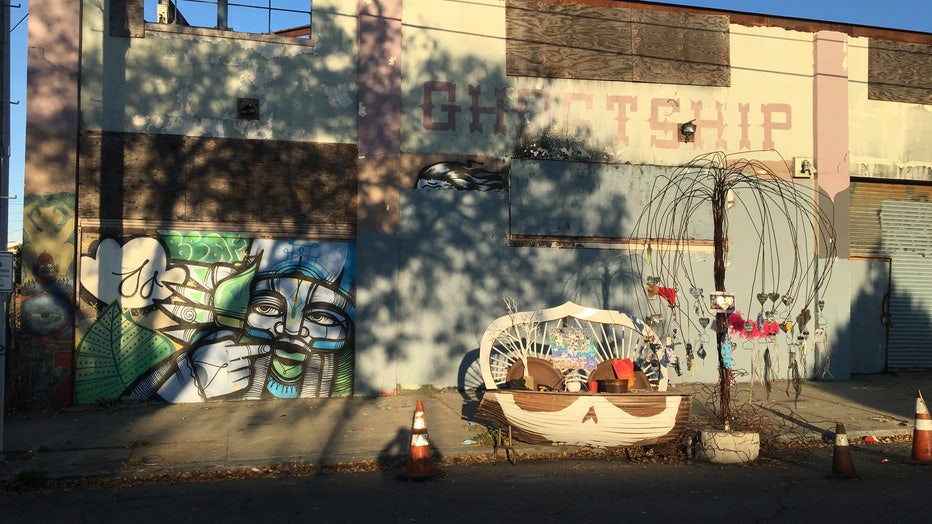 Oakland's Ghost Ship warehouse on the fourth anniversary of the fire that killed 36 people. Dec. 2, 2020.

“That’s troubling,” Oakland Auditor Courtney Ruby said. “That is unacceptable for the residents and the businesses of Oakland.”

Mayor Libby Schaaf set up a task force aimed at addressing shortcomings, however, many of its recommendations haven’t been fully implemented years later.

“My concern is that now we will end up that we have Ghost Ship: the sequel,” former task force member and Alameda County Healthy Homes Director Larry Brooks said. “People in the community must rise up and say this is something that’s important and needs to be addressed.”

Oakland did hire another 18 inspectors, according to the audit. But that didn’t dramatically increase inspections. In fact, 2,400 checks were never done.

Most of the missed properties are in Oakland’s low-income neighborhoods. In the Fruitvale, where the Ghost Ship walls still stand, 273 buildings were never inspected over a three-year period, the audit said.

For those buildings that were inspected, 40% never became compliant. The audit found the current enforcement of fire safety laws is ineffective and doesn’t adequately address or punish violators.

Most Oakland Unified School District buildings failed inspections and are still not in compliance. Some schools were found with missing fire extinguishers or nonfunctioning fire alarms.

Auditors found there is no way for property owners to dispute findings and as a result uncorrected violations persist without any inspection fee assessed when a place is re-inspected.

In other cases, landlords were let off the hook or follow-ups were never done. Brooks said he has gotten reports amid the pandemic of homes with lead hazards or lacking smoke detectors.

“If we had people going in and inspecting for just something like that – we’d be saving lives at a critical time when people are stuck in their homes,” he said.

The audit said a high turnover in fire department leadership and lack of training has contributed to the problems and compromised reform efforts.

Recommendations of the audit include the department coming up with a training plan, filling vacancies, addressing the inspection backlog and setting up performance measures.

“You have to organize your workload,” Ruby said. “There wasn’t even a full inventory of the properties that needed to be inspected.”

A spokesperson with the Oakland Fire Department said in part that the department “has made significant and meaningful improvements each year since 2016. We acknowledge that there are several areas where improvement is needed. We welcome any and all constructive evaluations of our department and remain committed to implementing vital reforms…”

Ruby said she hopes changes will be made with “urgency” and plans to revisit the audit next year to see what recommendations have and have not been implemented.

“I will keep a fire under the fire department to keep them moving forward,” she said. “We have got to make sure that we are keeping our resident and our businesses safe.”