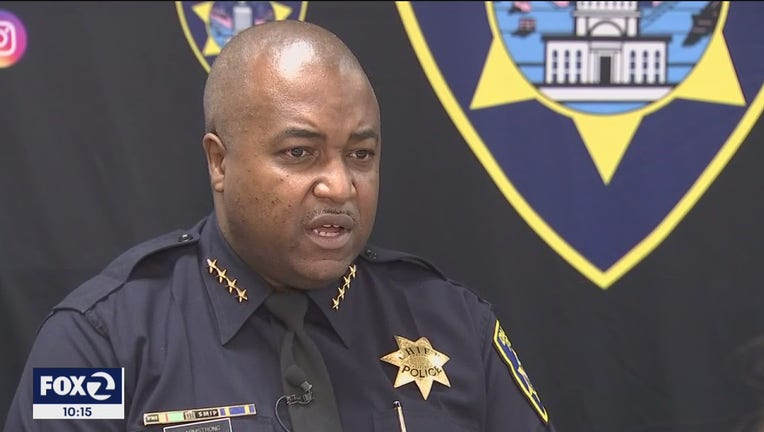 OAKLAND, Calif. - Oakland Police Chief LeRonne Armstrong on Monday described the violence that occurred during the Christmas holiday weekend, including the city's 134th homicide of the year, an officer-involved shooting and other shootings, robberies and armed carjackings.

The most recent homicide occurred near Oakland's Lake Merritt on Christmas Eve on Lakeshore Avenue near 1st Avenue not far from where a woman was shot dead last month. That man suffered from gunshot wounds and was pronounced dead at Highland Hospital, Armstrong said. The chief did not identify who was killed or announce if anyone has been arrested, though he did say the department now had a 47% clearance rate.

Oakland Police Chief LeRonne Armstrong on Monday described the violence that occurred during the Christmas holiday weekend, including the city's 134th homicide of the year, an officer-involved shooting and other shootings, robberies and armed carjackings.

"We hope that any information that anybody has seen in that area, they share it with the department as well as any video that someone has captured," Armstrong said.

Armstrong said that he realized that Lake Merritt is a desirable place to live and where people come to enjoy the city's natural beauty.

But, "we have seen an increase in crime in that area, and we've seen a greater presence, particularly in the late night hours."

Capt. James Beere, who is in charge of that district, said that police patrols have increased by the lake and that the department is using overtime to be able to make sure that happens.

"We had overtime units working in the area, walking and high visibility patrol starting off in the early afternoon hours," he said. "In addition, we also had resources coming in the late evening, early morning hours of the following day. So we're utilizing overtime as well as our community resource officers…and patrol to address the crime and make sure there's a police presence."

What officers have noticed that some people have been loitering and drinking alcohol and doing drugs, which has led to"confrontations or arguments that escalate, unfortunately, into violent crime and shootings," Beere said.

In addition, there were four non-fatal shootings over the weekend, Armstrong said, which include a drive-by shooting in front of UCSF Benioff Children's Hospital Oakland, which he called "obviously concerning" and a shooting on Fruitvale Avenue near East 18th Street where 30 rounds were fired, peppering buildings with gunfire.

Also on Friday, an Oakland police officer discharged his firearm when responding to a call regarding an armed suspect in the 500 block of 98th Avenue in the Brookfield Village neighborhood about 4:30 p.m., but the suspect was not struck and no one was injured.

The officer fired three times at the man, who "brandished a firearm at the officer," Armstrong said.

The officer is on paid administrative leave.