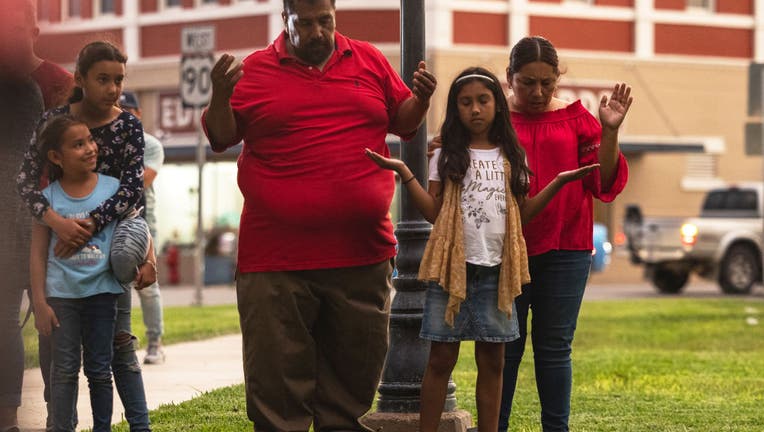 Members of the community gather at the City of Uvalde Town Square for a prayer vigil in the wake of a mass shooting at Robb Elementary School on May 24, 2022 in Uvalde, Texas. (Photo by Jordan Vonderhaar/Getty Images)

OAKLAND, Calif. - Politicians, sports figures and grieving families are speaking out against the massacre of 19 children and two adults in Texas at an elementary school a few weeks before summer officially begins.

And so is Kyla Johnson-Trammell, superintendent of Oakland Unified, where the last day of school is Wednesday.

"I am at a complete loss," she wrote to the school community in an open letter.

She noted that this should be a joyous time in the district, filled with graduations, fun activities and lots of laughter and love.

And now, the Oakland community – along with the rest of the nation – must mourn the loss of teachers as well as 2nd, 3rd and 4th graders, gunned down Tuesday afternoon at their elementary school by an 18-year-old named Salvador Ramos, who also died, killed by a Border Patrol agent.

Johnson-Trammell said she hoped that after the Sandy Hook shooting in 2012 in Newton, Conn., that gun laws would change and there would be a "stop to this wave of violent insanity." During that shooting, 20-year-old Adam Lanza killed 26 people, most of whom were 6- and 7-year-old children.

But, she noted, in the ten years since, there has been no substantive change across the country.

And even though it's the last day of school, she said that "we must pause and create space to support and heal our students and ourselves."

She offered that parents and guardians of OUSD students call the District Behavioral Health Department at 510-879-1397 or reach out to Care Solace at https://caresolace.com/site/oakland for assistance finding mental health services and support.

Other school communities have also sent notices out to parents with guidance on how to talk about what happened with their children.

The Contra Costa County Sheriff and San Francisco police said there would be extra patrols surrounding schools for the rest of the school year in an abundance of caution.