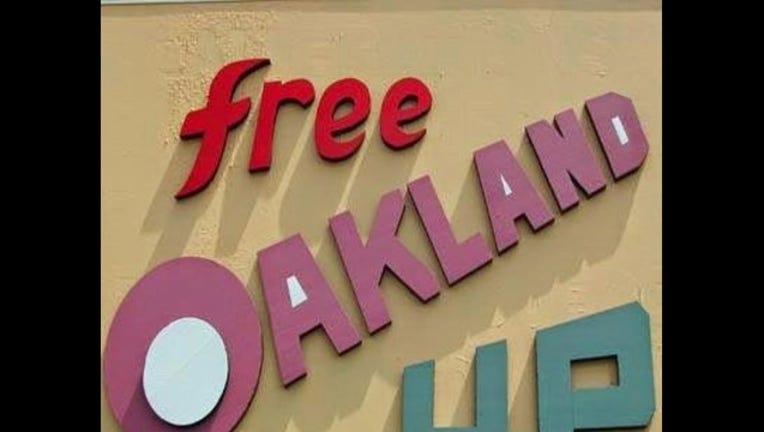 OAKLAND, Calif. (KTVU) -- The world is full of unexpected pleasures, so perhaps it's no surprise that just five doors down from Lourdes Ice Cream shop, in the shadow of A.M.A Auto Care in an east Oakland strip mall, lies a slice of a utopian dream.

"Some people think we are living in a dystopian time now, I don't think so", says Jocelyn Meggait.Meggait is the creator and proprietor of Free Oakland UP, that's "UP" as in Utopian Project, a thrift shop and art gallery where almost everything is free. In her mind, utopia is a place where everything is free, including medical care, education and gas. Her store offers an opportunity to experience a bite sized taste of that ideal paradise.

At the corner of MacArthur Boulevard and Coolidge Avenue, Free Oakland UP is overflowing with second hand treasures, new art pieces, antiques and white elephants.

Leaning up against a shelf full of books is a pastel oil painting of a woman who may have been a Texas oil heiress in the 1960's, there is a fishbowl full of amber handled screwdrivers, a 1940's mixer with a white porcelain bowl and every manner of vase , glass or tchotchke.

Pick out what you like and take it home, no money exchanged.

"I am a social practice artist," says Meggait, "that means I create an experience rather than a thing. When you walk into the place you are walking into my art project. Here the experience is taking something."

That price was right for Zoe Swanson, a transplant from Los Angeles who came by the store for the first time after reading about it and deciding it was a "neat concept."

The trip paid off.

Swanson walked away with a lightly worn pair of red leather Justin boots. The pair will match a brown one she already owns, but those cost her $80 at a second hand store. Swanson walked out happy, after getting a high five from Meggait on her score.

But don't show up planning to fill up your backseat and driving home with all your riches.

There is a one item per day limit.

"Part of the experience is choosing just one thing, getting out of the consumption addiction we all seem to have, " says Meggait.

She says some people get annoyed with the rule and try to offer money to get an extra item or two. But she says no, says she wants everyone to experience the shop on an equal playing field " so no matter how wealthy you are, you still can't buy a better experience."

Meggait grew up in Canada, a daughter of two teachers. Her mother taught second and third graders, her father taught industrial arts. She landed in the Bay Area after various stints in numerous places around the globe, from Mexico to Alaska.

She received her MFA at Mills where she used her studio space as one of her first experiments at offering free items after she realized how expensive and environmentally unfriendly making art could be.

Last May, she took the inheritance she received when her parents died, plunked down a deposit and "bit the bullet," signing a two year lease on space that was once home to a dry cleaners.

The daughter of parents who lived through the depression, she says she inherited her never-throw-anything-away tendencies from them. She says she thinks her parents would be proud of how she chose to spend the money, "the giving it away, I think they would be happy."

Meggait says the Dimond District is the perfect location for her shop.

It lies at the intersection of wealth and scraping by, which means it's like much of the Bay Area. According to the census, the median income in the Dimond hovers around $75,000 a year, but almost ten percent of the people who live there are living below the poverty level.

The neighborhood is not one of the roughest in the city, but the sounds of sirens and gunfire are not uncommon. And it has suffered it sorrows. It was in this neighborhood two years ago, that 8-year-old Alaysha Carradine was shot and killed while spending the night at a friend's house.

Meggait says when she gets to work on Saturday morning, broken bottles and glass litter the parking lot, "the drug dealers hang out here, shooting off guns, it gets rowdy."

Meggait says she chose Dimond for its diversity, both economically and culturally. She says the neighborhood has embraced the store.

Part of her intent is to offer neighbors, whether young hipsters, longtime families or newly landed Yemeni transplants, an opportunity to meet each other.

"There is this rapport that happens between strangers, and sometimes it's people who might normally overlook each other, so here they have a conversation about choosing an item and help each other decide," says Meggait.

She says most of the people who come to Free Oakland UP for the first time are attracted by the "free" and 90 percent have never been in an art gallery in their lives.

"Lots of people are intimidated by the art world, this welcomes everybody," says Meggait.

Unlike most art galleries, people are encouraged to touch the art, and then sit down and make some of their own. There are cabinets full of art supplies, all manner of bits and pieces, odds and ends in a variety of colors. All for use, and all for free.

For those not sure where to begin, there is a wall devoted to the "The Baggie Challenge." A visitor grabs a baggie filled with items such puzzle pieces, pencils or computer adapters and uses it to create a piece of art.

As to the future of the utopian project, Meggait is optimistic. She holds twice monthly fundraisers and keeps a donation jar to help pay the $900 a month rent. She did get a grant and is always looking for a benefactor with deep pockets. Then, who knows?

"I would like to open these all over the world," Meggait says laughing, "A franchise of free, wouldn't that be awesome?"