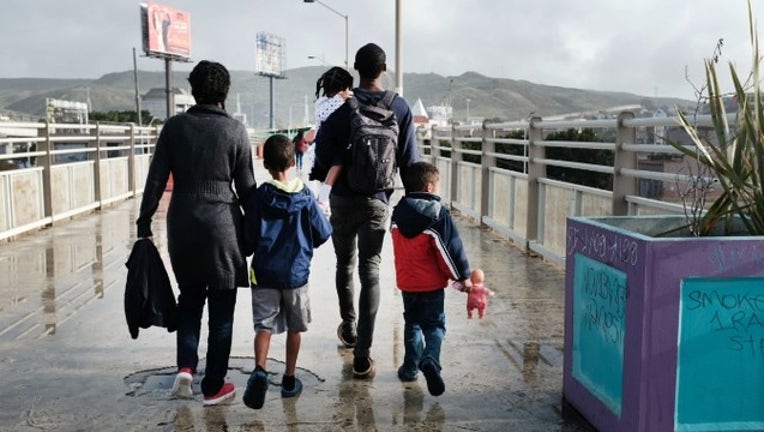 A migrant family walks across a bridge on Jan. 18, 2019 in Tijuana, Mexico. (Photo: Spencer Platt/Getty Images)

SAN DIEGO (AP) - The Trump administration expects to launch a policy as early as Friday that forces people seeking asylum to wait in Mexico while their cases wind through U.S. courts, an official said, marking one of the most significant changes to the immigration system of Donald Trump's presidency.

The changes are set to start at San Diego's San Ysidro border crossing, according to a U.S. official familiar with the plan who spoke on condition of anonymity because it's not yet final. San Ysidro is the nation's busiest crossing and the choice of asylum seekers who arrived in November in Tijuana, Mexico, in a caravan of more than 6,000 mostly Central American migrants.

The policy may be expanded to other crossings and is expected to face a legal challenge. It does not apply to children traveling alone or to asylum seekers from Mexico.

The plan, which follows bilateral talks in Mexico City over the last few days, calls for U.S. authorities to bus asylum seekers back and forth to the border for court hearings in downtown San Diego, including an initial appearance within 45 days.

The Trump administration will make no arrangements for them to consult with attorneys, who may visit clients in Tijuana or speak with them by phone.

U.S. officials will begin processing only about 20 asylum claims a day at the San Diego crossing but plan to ramp up to exceed the number of claims processed now, which is up to 100 a day, the official said.

U.S. border authorities fielded 92,959 "credible fear" claims - the initial step toward asylum in which a person explains why they fear going back to their home country - during a recent 12-month period, up 67 percent from a year earlier. Many are Central American families.

The "Remain in Mexico" policy is Trump's latest move to reshape immigration policy, though it may prove temporary. Other major changes have been blocked in court, including a ban on seeking asylum for people who cross the border illegally from Mexico and generally dismissing domestic and gang violence as grounds for asylum.