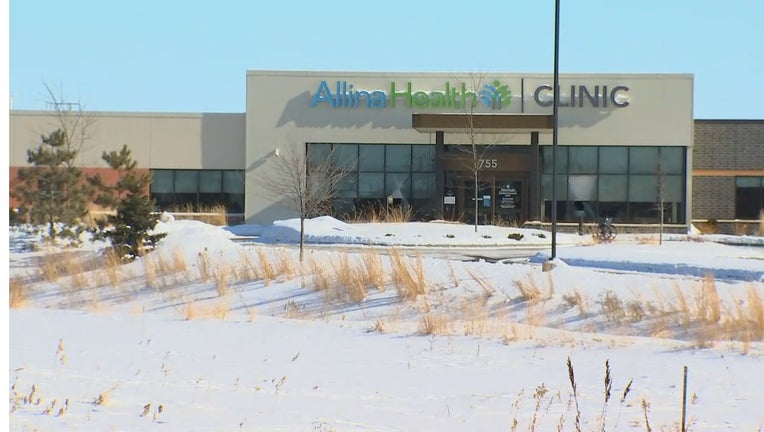 Windows appear to be shattered at the Allina Health clinic in Buffalo, Minnesota, where a shooting occurred Tuesday morning.

BUFFALO, Minn. (FOX 9) - A Wright County Sheriff's deputy investigating Gregory Ulrich, the man charged in the deadly Allina Health clinic shooting, believes Ulrich's dependency on pain medication was the "driving force" in the incident, according to search warrant applications filed in the case.

One woman died and four others were injured on Feb. 9 when Ulrich opened fire and deployed several bombs at the clinic in Buffalo, according to the criminal complaint.

The suspect's past is coming to light in court documents and in statements from his family.

This week, the deputy filed several applications for search warrants in order to search the hotel room Ulrich was staying in before the shooting and to obtain Ulrich's medical records.

According to the documents, authorities found a plastic bag containing six Oxycodone pills.

"Through training and experience, Your Affiant knows individuals who abuse controlled substances, such as Oxycodone, are often unable to obtain through legal means," read the document. "Your Afﬁant also knows that people who obtain Oxycodone legally, rarely store the pills in a sandwich bag."

Ulrich also made a video on his phone shortly before the shooting at the clinic. In the video, Ulrich "mentions consuming more than 30 pills at a time," according to the document.

The documents further detail the reasons behind a Buffalo Allina Health clinic doctor's restraining order against Ulrich. According to the court filing, the doctor prescribed Ulrich opioids after his back surgery in December 2016. Shortly after leaving the hospital, Ulrich was hospitalized for an opioid overdose. When Ulrich told staff he mixed the opioids with alcohol, doctors cut off his prescription. In 2018, a restraining order was granted after Ulrich made multiple phone calls to the doctor threatening violence at the clinic.

"It is clear to Your Affiant that Ulrich has a dependency on opioid style pain medications and was upset that his legal supply had been stopped," read the document.

The suspected shooter who killed one and injured four others at a health clinic in Buffalo, Minnesota was known to police, according to authorities.

After Ulrich was barred from entering the clinic, the deputy notes in the search warrant application Ulrich sought opioid medication from CentraCare Hospital in St. Cloud at least once. Documents show the deputy received Ulrich's medical records from Stellis Health and CentraCare Hospital.

Ulrich has been charged with second-degree murder, four counts of attempted first-degree murder and one count each of felony use of an explosive device and felony possession of a firearm.

Ulrich is in custody at the Wright County Jail.