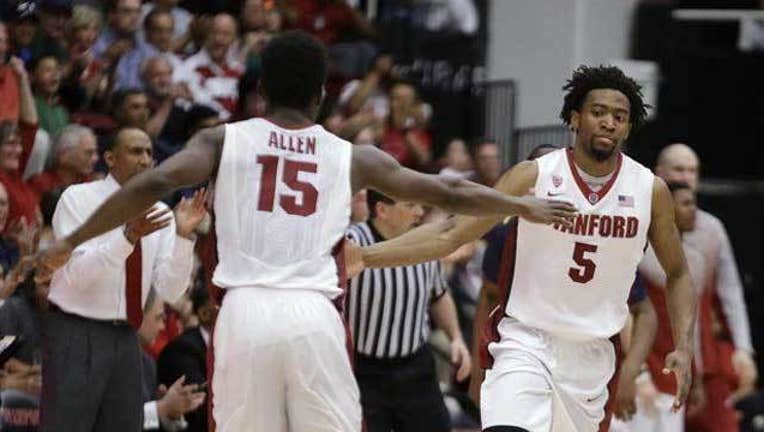 STANFORD, Calif. (AP) — Chasson Randle scored a career-high 35 points to lead Stanford to a 74-65 victory against Rhode Island in the second round of the NIT on Sunday.

"I just want to keep winning, to be real," Randle said. "It would be a great achievement to be the all-time leading scorer, but I just want to go out on a right note with this team."

"It's been an amazing season for us," Rhode Island coach Dan Hurley said. "Obviously, the difference in the game was in the free throws. The free-throw discrepancy played a huge role in the game. I was so proud of the way we fought, but I thought we deserved better than what we got there."

"We knew coming in that they were a very tough team," Randle said. "They're scrappy, do whatever it takes to win the game. We just wanted to respond. I think our guys did a good job of that."

Randle scored 18 points in the first half as Stanford built a 31-27 lead. He made Stanford's first six field goals, and his teammates were 0 for 18 until Marcus Allen's tip-in with 3:55 left.

"My dad was here today," Randle said. "For him to be here today and be able to see that is special to me."

Stanford: Randle surpassed his previous career high of 33 points, which he accomplished three times. ... Stanford improved to 4-0 all-time against Rhode Island and beat the Rams on the 17th anniversary of its 79-77 comeback victory in the 1998 NCAA Midwest Regional Final.

Rhode Island: Season is over.

Stanford: Hosts Vanderbilt on Tuesday in the quarterfinals.