What is D-Day? An explainer on the massive WWII invasion of Normandy

On June 6, 1944, the largest air, land and sea invasion in military history took place on the Normandy coast of France.

OMAHA BEACH, Normandy - On June 6, 1944, the largest air, land and sea invasion in military history took place on the Normandy coast of France. The Battle of Normandy, often referred to as D-Day and codenamed "Operation Overlord," has been described by historians as a major turning point for the Allied forces in World War II.

The 150,000 Allied troops, made up of American, British and Canadian forces, landed on the beaches of Nazi-occupied France and were then able to push inland to Western Europe.

The bravery displayed by these troops has been depicted in many books and films, including "Saving Private Ryan" and the book-turned-HBO miniseries "Band of Brothers."

The planning of D-Day

Hitler's army had invaded France and was aiming to take over all of Europe. The Allies knew that a successful invasion of mainland Europe was key to winning the war.

Many locations were considered in the planning stages of the invasion. According to the National D-Day Memorial Foundation, Normandy was ultimately chosen with one reason being its many weak sections along the Atlantic Wall, a series of concrete fortifications that Hitler ordered to be built along the coast.

The deception of D-Day

In the months leading up to D-Day, the Allies set up decoy operations to confuse the Germans, according to the foundation. The code name for this deception was Operation Fortitude, and they intended to trick the Germans into thinking the main invasion target was Norway or Pas de Calais in northern France, rather than Normandy.

The weather of D-Day

Eisenhower and the Allied leaders postponed the planned D-Day from the beginning of May to June 5, 1944. The invasion was postponed again just a few days before due to bad weather.

After Eisenhower's meteorologists forecasted a short window of suitable conditions, he gave the go-ahead for Operation Overlord.

"The weather was still not perfect the day of Operation Overlord, but it allowed the Allies to gain the footing they needed on the European mainland," an explanation reads on the National D-Day Memorial Foundation website.

The invasion on D-Day

A message from Eisenhower was given to every soldier, sailor and airman participating in the operation, which read in part:

"You are about to embark on the great crusade toward which we have striven these many months. The eyes of the world are upon you. The hopes and prayers of liberty-loving people everywhere march with you." 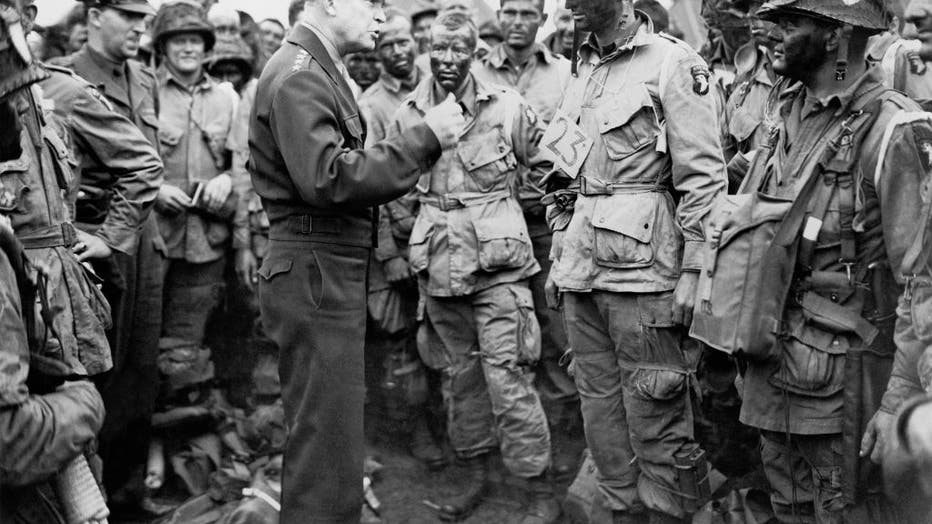 General Dwight D Eisenhower talking with American paratroopers on the evening of June 5, 1944, as they prepared for the Invasion of Normandy, Greenham Common, Berkshire, England, June 5, 1944. (Photo by Underwood Archives/Getty Images)

In the early hours of June 6, 1944, more than 13,000 Allied paratroopers were dropped in the cover of darkness behind enemy lines, hours before the coastal landings. An additional 4,000 paratroopers would later be brought in by gliders. The paratroopers ended up being badly scattered, but "they fought fiercely, causing confusion among the German commanders and keeping the German’s troops occupied," a description on the U.S. Army website reads.

"One paratrooper, as he descended, ended up having his parachute snag on a church steeple," the description states. "He was left hanging in midair, and was forced to play dead for two hours as the Germans moved around beneath him."

Thousands of planes also dropped bombs on German defenses, and a massive naval bombardment took place from the water.

Despite their importance, the airborne and naval operations were only "support actions," and would not win the battle alone, according to the D-Day Memorial Foundation.

"The landings on Normandy’s beaches would be where the battle was truly won or lost."

"You are about to embark on the great crusade toward which we have striven these many months. The eyes of the world are upon you. The hopes and prayers of liberty-loving people everywhere march with you."

Allied troops began landing on the coast of France at 06:30 on D-Day. The 50-mile stretch of Normandy coast was divided into five landing zones: Gold, Juno, Sword, Utah, and Omaha beaches. The Americans were assigned to land at Utah and Omaha, the British at Sword and Gold, and the Canadians at Juno.

The D-Day Memorial Foundation's description of the Allied landings reads in part:

"The boat ramp goes down, then jump, swim, run, and crawl to the cliffs. Many of the first young men (most not yet 20 years old) entered the surf carrying eighty pounds of equipment. They faced over 200 yards of beach before reaching the first natural feature offering any protection. Blanketed by small-arms fire and bracketed by artillery, they found themselves in hell." 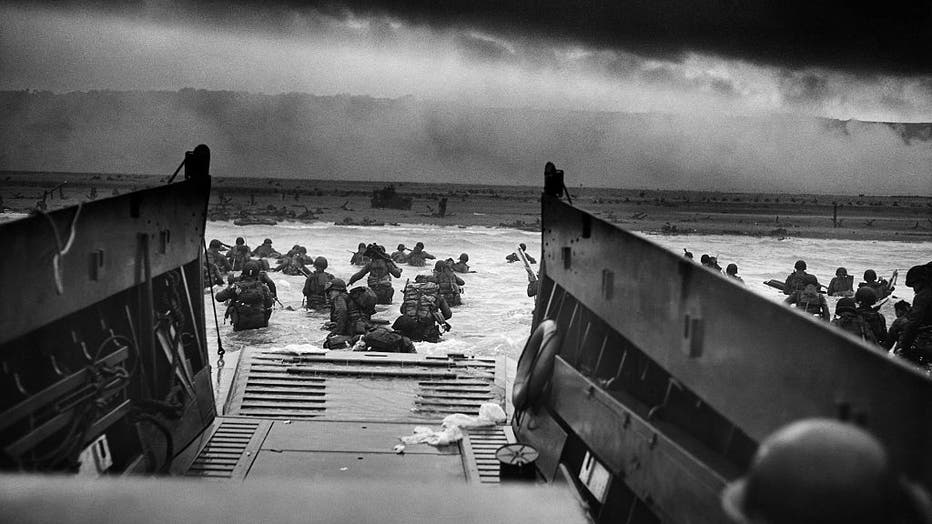 US troops wading through water after reaching Normandy and landing on Omaha Beach on D Day, 1944. (Photo by: Universal History Archive/Universal Images Group via Getty Images)

At Utah Beach, success came at the cost of about 197 casualties of the 21,000 that landed there on the first day, with an additional 2,500 casualties out of the 14,000 that had parachuted behind the beach.

Omaha Beach was more heavily defended than the Americans had expected, and it became the bloodiest of the beach landings, according to historians. There were about 3,000 casualties out of the 43,250 men that landed on Omaha on the first day.

"Many were hit in the water and drowned," Sgt. Bob Slaughter of the U.S. 29th Infantry Regiment recalled to National Geographic. "There were dead men in the water and live men acting dead, letting the tide take them in."

"It was horrible," Watson recalled to the Warfare History Network. "Everyone’s screaming for help, everyone’s wounded."

His subordinates had been given "strict orders" not to wake him for any reason, according to the History Channel. When he finally did wake around 11 or noon, he didn't immediately send reinforcements to Normandy, "still blindly confident that the entire D-Day invasion was a diversionary tactic."

The result after D-Day

By the end of June, the Allies had seized the key port of Cherbourg, according to historians. Approximately 850,000 men had landed in Normandy, and the Allied forces were set to push farther across France.

By the end of August 1944, Paris was liberated and the Nazis had been removed from northwestern France. This led to the Allied troops later entering Germany, where Soviet troops were advancing in the east.

The invasion of Normandy began to "turn the tide" against Nazi Germany. A History Channel description called it a "significant psychological blow," preventing Hitler from sending troops from France to build up his Eastern front against the Soviets.

By May 8, 1945, the Allies would formally accept Nazi Germany's unconditional surrender.

Editor's note: A version of the article was originally published on June 5, 2019.