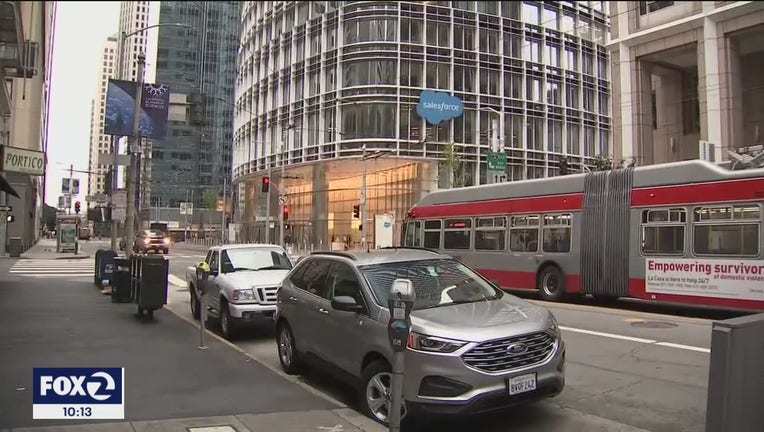 SAN FRANCISCO - Technology companies and workers aren't leaving the Bay Area, but they are moving within it, according to data presented Wednesday in a San Francisco Board of Supervisors committee hearing.

In a meeting of the Budget & Finance committee, the city's chief economist Ted Egan explained that most job fluctuation within the city is businesses starting, growing or shutting down – less than 20 businesses moved in or out of the city, he said.

However, job listings show that tech companies are increasingly relying on remote workers. Job listings show that hiring is rebounding toward pre-pandemic levels, but about 17 percent of tech jobs listed in the San Francisco location are now remote, compared to 2 to 3 percent prior to the pandemic, Egan said.

There's also more unused office space available to be subleased now than at any other point in the last 20 years. Since the start of the pandemic, space available for subleasing has increased in San Francisco by 183 percent, Egan said.

Housing data also supports the conclusion that workers are relocating out of San Francisco to other parts of the Bay Area, according to Egan. Housing prices on the online real estate tool Zillow show that prices for single-family homes in San Francisco have dropped despite housing prices rising nationally. Housing price growth has also been low in other areas of highly concentrated tech jobs such as Palo Alto and San Jose, Egan added.

Meanwhile, housing price growth has been high in other Bay Area regions such as west Marin County, eastern Contra Costa County and Napa -- areas that could make more sense to live in if you don't have to commute into the city as often or at all.

"This isn't people fleeing the Bay Area, running away to Miami or Texas," Egan said. "But it does point to a reallocation of people and tech talent within the Bay Area and perhaps broadly within Northern California."

As a result of remote working and reallocation, payroll paid within the city has drastically dropped. San Francisco bases how much of a business's gross receipts are taxable to the city based in part the proportion of their payroll paid within the city, Egan said, and the city could lose tax revenue based on decreasing payroll. Any estimates are currently "highly uncertain," he said, but could have a major impact on the city's economy.

With demand for tech workers still high and survey data showing that many workers prefer flexible work from home policies, Egan said this trend could continue at least in the medium term. Its impact could affect not only city tax revenue and housing demand, but also restaurants, retailers and hotels, which previously relied on office workers as a large part of their clientele.

Kate Sofis, director of the city's Office of Economic and Workforce Development, added that the city has several initiatives in place and in the works to strengthen ties with tech companies. Those initiatives include training programs for city residents such as TechSF and efforts to remove barriers for new startups without resorting to tax incentives.