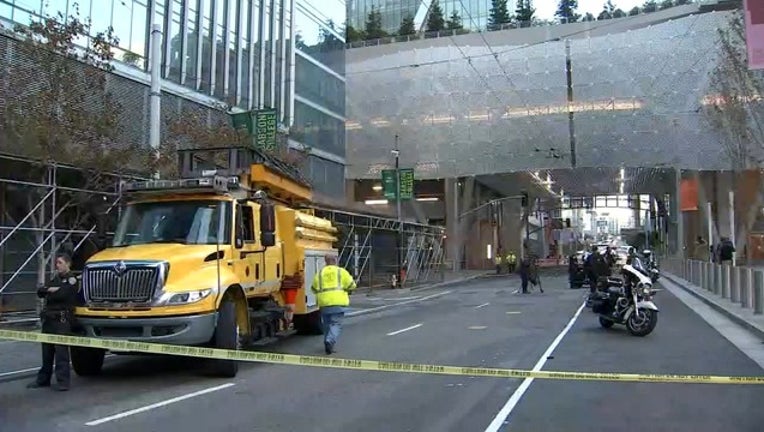 File photo - Repairs and reinforcement work are underway on fractured steel beams at the Salesforce Transit Center in San Francisco. The space closed in September after fractured beams were discovered.

Saturday morning crews will replace hydraulic jacks on First Street, under the bus deck, with a shoring system that will give crews the chance to reinforce the girders on the bus deck above.

One block of First Street will be closed between Howard and Mission streets from 5 a.m. Saturday to 8 p.m. Sunday as the replacement occurs, according to TJPA officials.

Repairs of the steal beams are expected to be complete by June and then the shoring system on First Street and another on Fremont Street will be taken away.

TJPA Officials said a date for the reopening of the center has not been decided yet.

The Salesforce Transit Center closed in September after the fractured beams were found on the ceiling of the third-level bus deck.

TJPA Officials said no other issues have been discovered following more inspections and continued monitoring of the center.

"While we are eager to welcome the Bay Area back to the transit center, we are balancing this with our responsibility to undertake an appropriately rigorous inspection and review protocol and cooperate with the independent review of the facility," TJPA Executive Director Mark Zabaneh said in a statement.

Bus service continues to be provided out of the Temporary Transbay Terminal at Howard and Main streets.