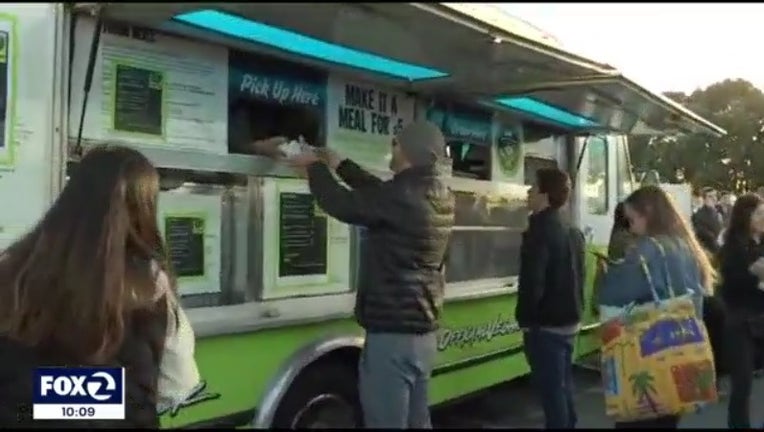 SAN FRANCISCO - Dining out is back on the menu for San Francisco foodies looking for something to do. San Francisco Restaurant Week launched on Friday as well as Off the Grid, which came back on the map Friday night as foodies flocked to the popular food truck event at Fort Mason in San Francisco, returning after two years of the pandemic shutdowns.

"I got a chicken bao with some pickled carrots," said Conor Reilly, a first-time visitor who moved recently to San Francisco.

Long lines were back as people waited to try familiar favorites and new food truck offerings.

"Most of them are returning and then we have a handful of new ones that cropped up during the pandemic," Reneé Frojo, the Off the Grid marketing director, "I've met a lot of people who were out of a job and wanted to try to pursue this and had the time to pull it together."

The owner of the Gyro Stop Ty Cordar drove down from Sacramento and was glad to be back at the event.

"The pandemic it was hard because big jobs like this were no longer," said Cordar, "it was about 50% of my business."

Toriano Gordon's Vegan Mob was one of the new trucks. He says they opened in 2019 just before the pandemic.

"The first night of the shutdown I saw the worst numbers that I've ever saw and then the next day, things started to get better," said Gordon, who added that he turned to delivering food and his business took off. Now, they've joined Off the Grid.

"It's beautiful. It's like my dream happening," said Gordon.

At Off the Grid, signs reminded people that the pandemic is not over, with mention of COVID vaccinations and masks. Eating out at a time of transition has left it up to people to decide what feels comfortable and safe.

"I guess I was expecting to see more people wearing masks," said Carlos Ariza, a San Francisco resident who was wearing a mask and had stopped to get a bite to eat during a bicycle ride.

Fine indoor dining is also back.

Anzu restaurant at the Hotel Nikko downtown is one of more than 100 restaurants offering exquisite 2-4 course prix-fixe specials for San Francisco Restaurant Week which runs from April 1 through April 10th.

Steven Grant, the food and beverage manager at Hotel Nikko is also on the Golden Gate Restaurant Association Board.

He says the special promotional week is great for helping businesses downtown that have suffered from the lack of convention and tourism guests. He also says that he's noticed a difference in the amount of people downtown and staff are trying to make people feel comfortable.

"Of course the mask mandates have been lifted so we don't require them to wear masks but our staff still wear masks when they serve people," said Grant.

Their guests were glad to be dining out again.too.

Margarita Luna of Belmont was there with her fiance. She says she happened to see an ad about the special event while they were touring the Hotel Nikko scouting for wedding sites.

"We're both fully vaccinated and boosted so we definitely feel a lot safer being out and about now,"

"It's amazing how many staff members lost their jobs, and now they can start to get them back. I hear someone pouring water over there and think yay, he's working," said Kelly Bell, a San Francisco resident, "Be sure to tip well."