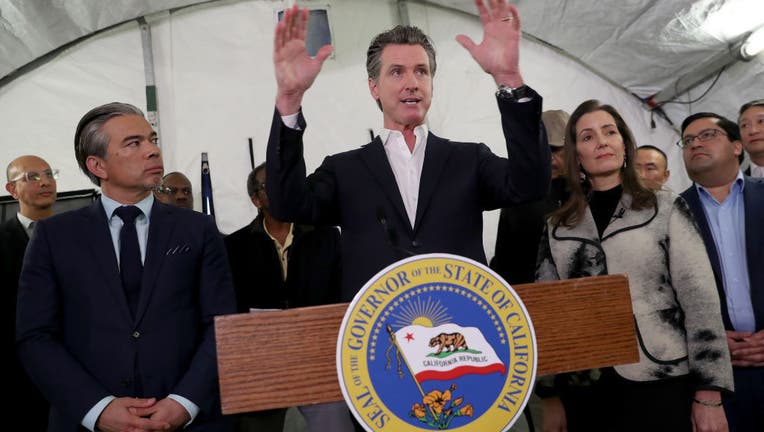 OAKLAND, CA - JANUARY 16: Gov. Gavin Newsom speaks at a press conference on homelessness in Oakland, Calif., on Thursday, Jan. 16, 2020. To the right is Oakland Mayor Libby Schaaf and to the left is 18th District Assemblymember Rob Bonta. The city wi

Bonta, a Democratic assemblyman who represents Alameda, Oakland and San Leandro, had long been a top contender for the job.

When he was young, Bonta's family lived in a trailer at the United Farm Workers headquarters in California and he grew up near Sacramento. He attended Oxford University and graduated from Yale Law School in 1998. He was also an avid soccer player as a youth.

Supporters had said that Bonta would understand on a more personal level what it feels like to be the target of Asian-American prejudice during the coronavirus pandemic, including in California, which is home to the nation’s largest Asian population.

"He understands as the son of immigrant parents what it’s like to come to this country when English is not your first language, for example, when there is mistrust of law enforcement," state Treasurer Fiona Ma said in an earlier video.

In February, Bonta introduced AB 886 to community-based organizations that provide culturally competent mental health services for victims of hate violence and restorative justice programs. His bill would also expand the eligibility for victims of hate violence to access victim compensation funds and not be denied solely because the victim did not file a police report.

In 2019, Bonta helped shine a light on the plight of Isabel Cueso, a 24-year-old Concord woman battling a rare disease, who received a sudden deportation notice.

And recently, he was standing side-by-side with Newsom at Ruby Bridges Elementary School in Alameda, where his wife is a school board member. The two politicians were championing the partial return of students to campus.

The appointment of an Asian American as the state's top prosecutor had been championed by colleagues such as Democratic Assemblyman David Chiu of San Francisco, who said California’s next attorney general will need to be a leader for "API Americans everywhere."

"We have to continue to build bridges of trust between our API communities and law enforcement," he said.