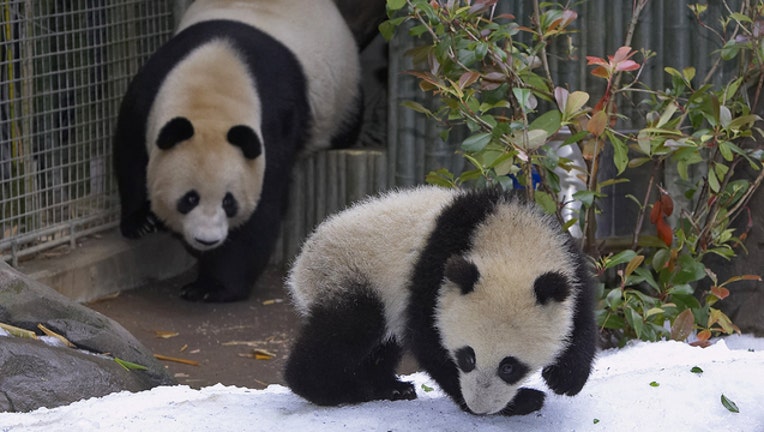 Giant pandas Bai Yun and her 9-month-old offspring, Su Lin, celebrate Mother's Day at the San Diego Zoo with a flurry of snow on May 14, 2006 in San Diego, California. (Photo by San Diego Zoo via Getty Images)

Zoo officials announced Monday that Bai Yun, 27, and her son, Xiao Liwu, 6, will be sent to their ancestral homeland as a long-term panda loan agreement with China comes to an end.

Bai Yun first arrived at the San Diego Zoo in 1996 from the Wolong National Nature Reserve in China.

“The San Diego Zoo was honored to be chosen by conservationists in China to work with them to develop a new model for species conservation,” said Douglas G. Myers, president and CEO of San Diego Zoo Global. “The panda program we began together demonstrates how powerful these collaborative efforts can be.”

“This knowledge allowed them the ability to provide the necessary help to boost giant pandas’ wild population in China to more than 2,000 individuals,” the zoo said in a statement.

The zoo started working with giant pandas more than two ago when the species was on the verge of extinction.

The giant panda’s status has since improved from “endangered” to “vulnerable,” meaning the species is in less danger of extinction than before and that conservation efforts are working, citing their increased numbers and policies put in place by the Chinese government.

“Although we are sad to see these pandas go, we have great hopes for the future,” said Shawn Dixon, chief operating officer, San Diego Zoo Global. “Working with our colleagues in China, San Diego Zoo Global is ready to make a commitment for the next stage of our panda program.”

Pandas live mainly in bamboo forests high in the mountains of western China. They eat almost nothing but bamboo and play a crucial role in the forests where they roam by spreading seeds and facilitating the growth of vegetation, according to the World Wildlife Fund.

Fans of the two pandas were encouraged to share their favorite memories and best wishes for the panda program by using #Panda4Ever on social media.