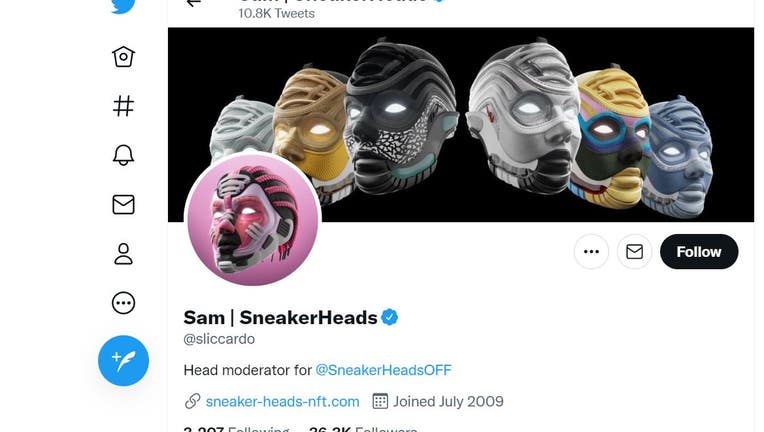 A spokesperson from the mayor's office took to Twitter to apologize for any spam content or suspicious tweets from the mayor's @sliccardo handle. Whoever the hackers are, renamed the account ‘Sam SneakerHeads’, while the blue Twitter verification badge remained intact.

The Sam SneakerHeads account seems to be promoting an upcoming collection of Sneaker Head NFTs. What is that you ask? It's pretty much what it sounds like.

The cover image from Liccardo's Twitter page showed what appeared to be humanoid heads covered in sneaker gear. As disturbing as that actually looks, they are apparently a collectible with some recent hype surrounding them.

The Sneaker-Head promoted content started coming in after Liccardo's last legitimate tweet about Ketanji Brown Jackson being confirmed to the U.S. Supreme Court at around 6 p.m.

Since then, it's been all Sneaker Head images filling the mayor's timeline. Most are retweets from the @sneakerheadsoff Twitter account which has 213,000 followers compared to the mayor's following of more than 36,000.

The hackers have made it so that the Sam SneakerHeads account is the head moderator for SneakerHeadsOff and they include a link you can go to buy the collectible NFTs.

The mayor's press office said they are still working to reclaim ownership of Liccardo's Twitter account. We refreshed the mayor's Twitter page after publishing an earlier version of this story. The profile picture and banner image that showed Sneaker Heads had been taken down, but the timeline was still full of spam retweets.

"We are thankful for the swift response by Twitter support and policy teams. Their attentiveness and urgency in this situation is a tremendous help as we work to resolve this," Rachel Davis, the mayor's chief communications and marketing officer said this evening.