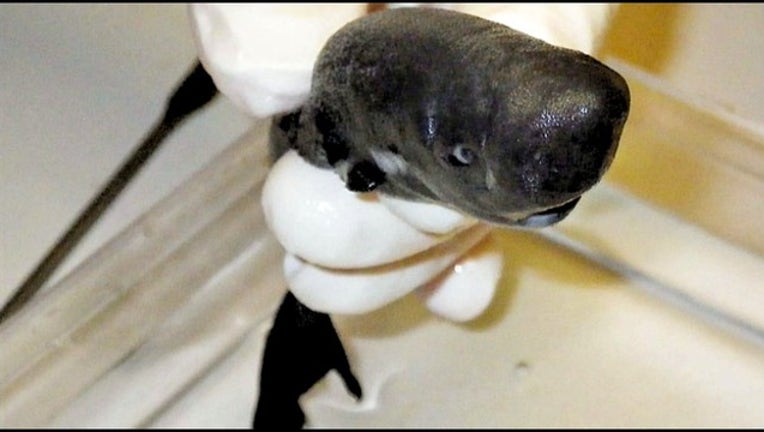 On July 18, 2019, researchers at Tulane University announced they've identified an American Pocket Shark that was discovered in the Gulf of Mexico. Photo courtesy: Michael Doosey/Tulane University

NEW ORLEANS (KTVU) - Scientists have discovered a new underwater species -- a rare pocket shark that glows in the dark.

Researchers from Tulane University said the male kitefin shark measures 51/2-inches and identified the species as an American Pocket Shark.

It was caught back in 2010, in the eastern Gulf of Mexico, where scientist from National Oceanic and Atmospheric Administration (NOAA) were studying sperm whales. But it wasn't until about three years later that researcher Mark Grace discovered the shark while examining specimens that were collected during that NOAA survey, according to Tulane officials.

A team of researchers then undertook the painstaking work to determine what species it was. Tulane Biodiversity Research Institute Director Henry Bart noted that the partnership between the university and NOAA was instrumental in the discovery and identification of the shark.

The work involved years of examining sophisticated x-ray images and high resolution CT scans, officials said. It would all pay off, as they learned their discovery was historic.

"In the history of fisheries science, only two pocket sharks have ever been captured or reported," Grace said. "Both are separate species, each from separate oceans. Both are exceedingly rare."

Researchers said the only other pocket shark ever identified was captured back in 1979 in the eastern Pacific Ocean.

They said both species have small pockets on each side near the gills that secrete a glowing fluid. But researchers said ​​​​​​there are noteworthy differences between the two: The newer specimen has fewer vertebrae and numerous light-producing photophores that cover much of the body.

The species' ability to make itself glow is believed to help attract prey. The unassuming prey is drawn to the illumination floating around the shark, which then takes the opportunity to attack.

Scientists said the discovery of the American Pocket Shark points to the vast scope of research that remains to be done in the Gulf.

"The fact that only one pocket shark has ever been reported from the Gulf of Mexico, and that it is a new species, underscores how little we know about the Gulf," said Bart, "and how many additional new species from these waters await discovery."