In addition, Cal Fire said 360,055 acres burned across seven counties, including Alameda, Contra Costa and Santa Clara counties, and had the blazes 15% contained.

About two dozen structures have been destroyed and 20,065 remain threatened.

Of all the major fires raging in California, the SCU fires comprise the second-largest complex.

As one Cal Fire Chief put it, fighting these fires is still a marathon with a long way to go. In that regard, Cal Fire says it got lucky Sunday night on the SCU fire, very lucky.

As one Cal Fire chief put it, fighting these fires is still a marathon with a long way to go. In that regard, the fire agency said it got lucky Sunday night on the SCU fire.

"We were actually aided by the fact lightning strikes did not come in that we expected to yesterday; only having started one additional fire last night," said Cal Fire Operations Section Chief Tim Ernst.

But the fire remains a monster as it grows in two dangerous directions.

"Our number one priority for this fire will remain this entire western front along what we call the Calaveras Zone," said Ernst. That's where the majority of the threatened structures are.

"A large part of our priority right now is to stop ant further southerly movement of the fire," said Ernst.

On a 72-mile drive from Patterson in Stanislaus County along Del Puerto Canyon Road and Mines Road to Livermore, crossing a major southern portion of the SCU Fire footprint, much of what we saw was scorched earth of an extremely sparsely populated mountain wilderness.

However, we were somewhat surprised to see a number of still standing homes and structures that had a lot of well trimmed and clean areas surrounding them. Out buildings, not so well cared for, were taken by the flames.

We also saw remnants of the fire fight that went on here, such as a track of retardant laid down by an air tanker. Because folks on Del Puerto Road take defensive space very seriously and the firefighters did a heck of a job defending property, it looks like some of those folks, at least, are going to have homes to go home to.

The popular Frank Raines Off Road Park, remained mostly intact, with the children's playground untouched, but the park did suffer the loss of the ranger's home, a barn and a small cottage

We frequently encountered groups of fire trucks standing by to go on patrol for hotspots. Other crews plied the steep and rugged terrain to put any hotspots out. In one case, a southern California crew from Torrance used their waiting time and location to take rope and repel training. There can never be too much training.

The traditionally two worst months of fire season is still ahead of us: September and October. 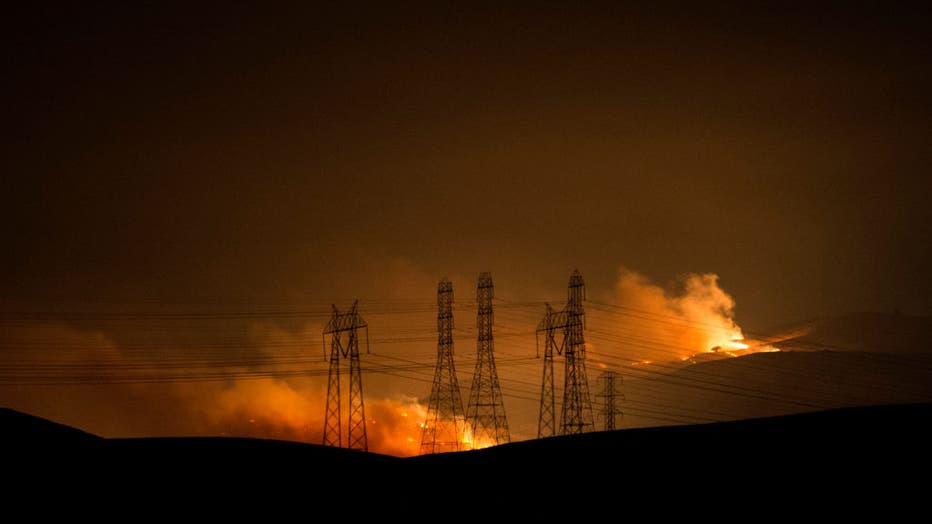 As of 5 p.m. on Monday, Zone 4B in Santa Clara County was reduced from an evacuation order to a warning. (See the SCU Lightning Complex Fire evacuation map)

West of I-5 North of Stanislaus/Merced County Line

West of the Fire Perimeter

East of Ferguson Rd. East and North of Hwy 152

South of Welch Creek Rd. to the fire perimeter and the Alameda/Santa Clara County Line

East of Calaveras Rd. at Welch Creek Rd. to the fire perimeter

All of Mines Road, south of Mile Marker 10 to the County line

West of I-580 to Alameda County line

The PAR Estates and following streets are excluded from the order, but will be in an evacuation warning: (See warning below) Evacuation Warnings: (8/20/20 12PM) San Joaquin County:

Chrisman Road south of I-580, and the Tracy Golf & Country Club

North of West Corral Hollow Road to I-580

East of the Alameda County line to I-580 Stanislaus County:

East of Curtner Rd. south along I-680 to the Santa Clara County Line

For the unincorporated areas of Santa Clara County, Morgan Hill, and Gilroy