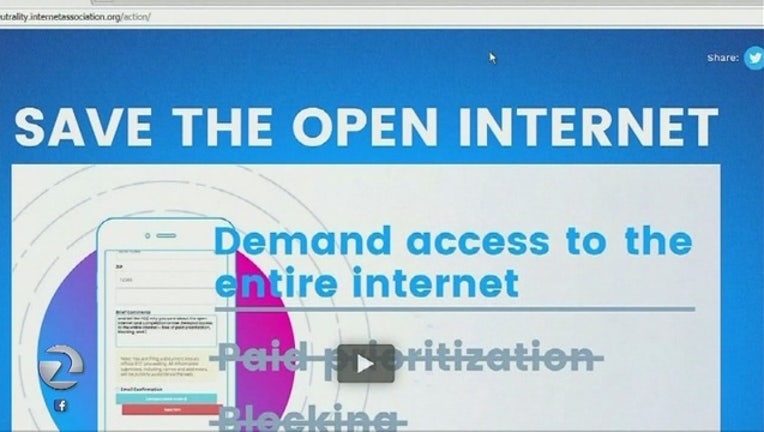 WASHINGTON (AP) -- Senate Democrats, joined by three Republicans, pushed through a measure Wednesday intended to revive Obama-era internet rules that ensured equal treatment for all web traffic, though opposition in the House and the White House seems insurmountable.

Republicans on the short end of the 52-47 vote described the effort to reinstate "net neutrality" rules as "political theater" because the GOP-controlled House is not expected to take up the issue and the Senate's margin could not overcome a presidential veto.

Democrats, however, were undeterred, saying their push would energize young voters who are tech savvy and value unfettered access to the internet. "This is a defining vote. The most important vote we're going to have in this generation on the internet," said Democratic Sen. Edward Markey of Massachusetts, who sponsored the measure.

At issue are rules that the Federal Communications Commission repealed in December that prevented providers such as AT&T, Comcast and Verizon from interfering with internet traffic and favoring their own sites and apps. Critics, including the Trump administration, said overregulation was stifling innovation, and they backed the FCC's move, which is still set to take effect next month.

Markey said net neutrality has worked for the smallest voices and the largest, but he said internet service providers are trying to change the rules to benefit their interests.

Republicans said they were willing to work with Democrats on enshrining the principle of net neutrality in legislation. But they wanted to also ensure that regulatory efforts didn't get in the way of innovation and quickly evolving internet services.

Sen. John Thune, R-S.D., said the internet thrived long before the Obama administration stepped in with rules in 2015, and he predicted that when the FCC repeal is in place, consumers won't notice a change in their service.

"That's what we're going back to: rules that were in place for two decades under a light-touch regulatory approach that allowed the internet to explode and prosper and grow," Thune said.

But the FCC's move has stirred fears among consumer advocates that cable and phone giants will be free to block access to services they don't like or set up "fast lanes" for preferred services -- in turn, relegating everyone else to "slow lanes."

Tech companies have been signaling that the repeal of net neutrality could lead to significant financial consequences.

In its annual report filed in January, Netflix said the repeal of net neutrality, and the possibility that other "favorable laws" may change, could result in "discriminatory or anti-competitive practices that could impede our growth, cause us to incur additional expense or otherwise negatively affect our business."

Other businesses have echoed this statement. In Spotify's pre-IPO filing in February, the company said laws limiting "internet neutrality" could "decrease user demand for our service and increase our cost of doing business.

Similarly, Snapchat parent Snap said in February that adopting laws that "adversely affect the growth, popularity, or use of the internet, including laws governing internet neutrality, could decrease the demand for our products and increase our cost of doing business."

A consortium of tech companies from Etsy to IAC, which operates Tinder and OKCupid, have banded together to create a campaign called "Red Alert," which supports the congressional vote and other efforts to preserve net neutrality.

Joining all Democratic senators in voting to reverse the FCC's action were GOP Sens. Susan Collins of Maine, John Kennedy of Louisiana and Lisa Murkowski of Alaska.

In recent months, Republicans have used the tools made available in the Congressional Review Act to overturn several environmental, health and safety rules put into place in the final months of the Obama administration. This time, however, it was Democrats who led the effort to kill a rule supported by the Trump administration.

"This is our chance, our best chance to make sure the internet stays accessible and affordable to all Americans," said Senate Minority Leader Chuck Schumer, D-N.Y.

"Net neutrality is what allows the internet to be a tool for free speech, permissionless innovation and diverse voices on an infinite number of websites," said Chris Lewis, vice president at the advocacy group Public Knowledge.

But the Information Technology and Innovation Foundation, a think tank, said Congress was taking the wrong tack. Instead of blocking the FCC's rule repeal, it suggested that policymakers work toward "bipartisan compromise legislation that will stand the test of time."