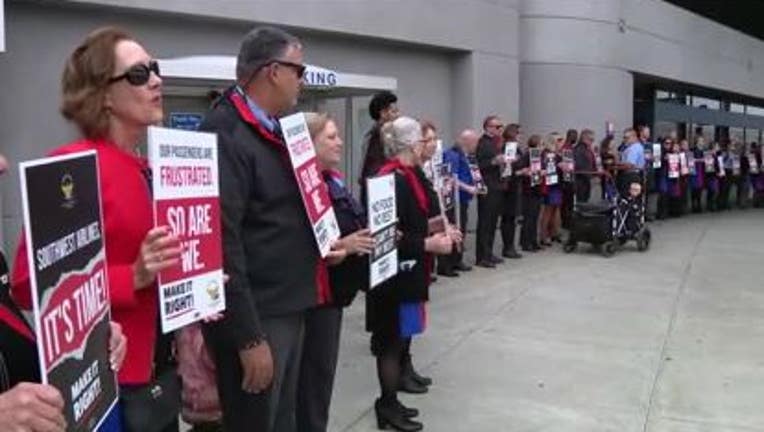 Oakland-based flight attendant and union representative Josh Rosenbert was on the picket line on and said that poor working conditions have led to inadequate meal and rest opportunities.

"Sometimes we've gotten to overnights and there haven't been hotels available for us," Rosenbert said. "We've slept on airport floors sometimes. We have trouble getting a break on the aircraft. Sometimes we'll go all day without a hot meal, because we have to be on that aircraft tending to our passengers the entire day," he added.

In a statement, Southwest Airlines said the company encourages their employees to express their opinions. "Informational picketing is common during contract negotiations, and we do not anticipate any disruption in service resulting from the demonstration by off-duty Flight Attendants," the company said, adding, "Southwest looks forward to continuing negotiations with TWU 556 and the National Mediation Board so that we can reward our Flight Attendants and continue attracting great talent."

The labor action came as a strike at San Francisco International Airport, involving more than 1,000 restaurant employees and other food workers, moved into its second day. 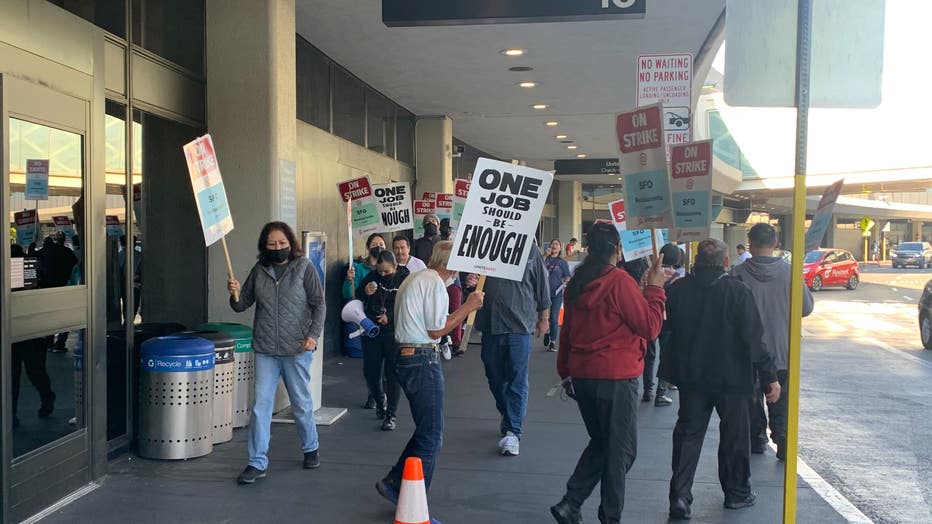 The strike prompted an alert to travelers to bring their own food before arriving to the airport, as SFO's restaurants, bars, and cafes were shut down.

SFO food workers have been without a contract since 2019. They're demanding better pay and benefits.

The workers were scheduled to take part in a special hearing with the San Francisco Board of Supervisors on Tuesday afternoon to discuss the labor conflict and its operational impacts on the airport, as well as its effects on city's revenue from airport concessions sales. The board also asked SFO officials to attend the meeting.

Also at SFO, another group, United Airlines flight attendants took to the picket line on Tuesday. They marched outside the airport's Terminal 3 over staffing and other problems.

The union representing the workers, the Association of Flight Attendants-CWA (AFA-CWA), called on United to resolve what it called ongoing operational problems like delayed and canceled flights, that were putting undue pressure on the airline's frontline workers.

"United management’s failure to properly staff crew schedulers, the flight attendant support team, catering and more has exacerbated these operational issues and left passengers and Flight Attendants waiting for answers for hours at a time," the union said.

In a statement to KTVU, United said, "We’ve worked hard to reduce wait times for flight attendants to talk to a crew scheduler, including more hiring and adding digital options for some items."

San Francisco International was one of more than a dozen airports in cities including Honolulu and London, taking part in the United flight attendants' "Day of Action."