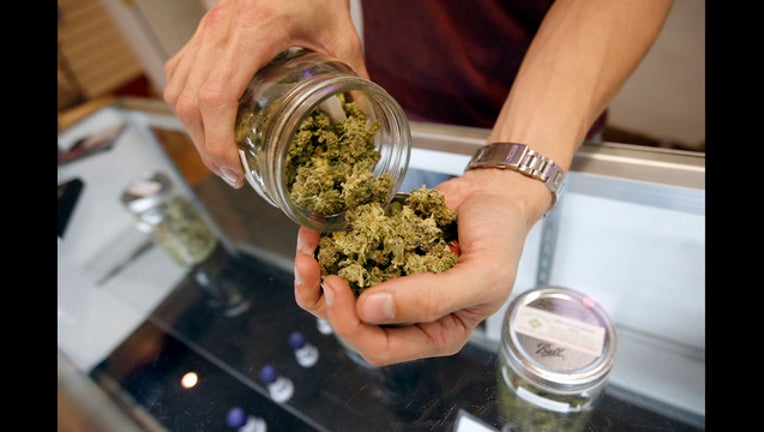 A budtender pours marijuana from a jar at Perennial Holistic Wellness Center medical marijuana dispensary, which opened in 2006, on July 25, 2012 in Los Angeles, California. (Photo by David McNew/Getty Images)

OAKLAND, Calif. (BCN) - With the Jan. 1 start date for legal sales of recreational marijuana in California fast approaching, dozens of current and potential cannabis entrepreneurs came to a summit in Oakland today to hear state officials explain the rules they must follow and the fees they must pay.

Supervisor Nate Miley, who helped organize the summit, pointed out, "Those are just the fees. Business are also subject to taxes."

In addition, Dr. Asif Mann, the chief of the Manufactured Cannabis Safety Branch of the California Department of Public Health, said cannabis businesses must get authorization, such as permits, from local officials.

Alameda County supervisors said the summit's goal was to bring key stakeholders together to address the challenges and opportunities in implementing the new legal, taxed and tightly regulated system for medical and adult recreational use of cannabis.

Although the rules and fees were daunting to many of those who attended the summit, Mann said state officials don't want to scare off people from entering the cannabis field but instead want to encourage them to enter it.

"Our goal is to get you licensed because your success is our success," he said.

Mann said the Department of Public Health's role is to promote public health and workplace safety through regulations, licensing and compliance and by making sure that cannabis products are made in a safe way.

He said labeling may not refer to products as candy and cannot be attractive to children.

Mann said another rule is that products cannot be in the shape of a human being, animal, insect or fruit.

Richard Parrott, the director of the California Department of Food and Agriculture's CalCannabis Cultivation Licensing Division, said no alcohol or tobacco sales are allowed on the premises of businesses that sell cannabis.