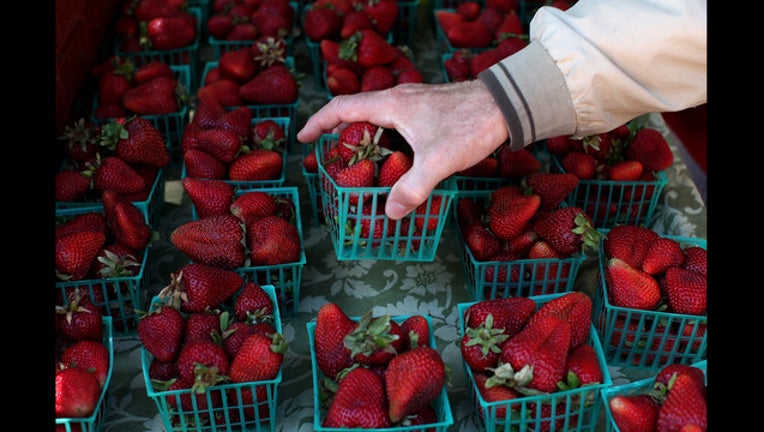 Strawberries top the list of "Dirty Dozen" fruits and vegetables that contain the most pesticide residue. (Photo by Justin Sullivan/Getty Images)

OAKLAND, Calif. (KTVU) - A recent study suggests that you should cautiously consume conventionally grown strawberries, spinach, nectarines and more. Or, if not organic, avoid eating a certain twelve fruits and vegetables all together.

Strawberries own the top spot on the Environmental Working Group’s Dirty Dozen list for a third consecutive year. This list compiles the 12 conventionally grown – which means not organic –  fruits and vegetables that contain the highest pesticide residue. And the EWG is warning shoppers that, even after washed or peeled, these fruits and vegetables may contain high pesticide residue.

The EWG analyzed tests by the U.S. Department of Agriculture that found nearly 70 percent of the conventionally grown produce samples were contaminated with pesticide residue. Pesticides include an assortment of chemicals that kill unwanted insects, plants, molds and rodents.

Americans consume pesticides every day, according to the report. And despite fruits and vegetables being an essential component of a healthy diet, consuming them, and the potential pesticides they’re littered with, “may pose subtle health risks.” A study found an association between consuming high-pesticide-residue foods and fertility problems for both men and women.

Of the 39,000 USDA tests of 47 vegetables, one-third of all conventional strawberry samples had at least 10 pesticides and one sample had 22, according to EWG, a non-profit that works to “empower people to live healthier lives in a healthier environment.” Making up the top three was spinach, where 97 percent of the samples contained pesticide residue, and nectarines, which trailed closely at 94 percent.

A total of 230 different pesticides and pesticide breakdown products were found on the produce samples, according to USDA tests. More than 98 percent of samples of strawberries, spinach, peaches, nectarines, cherries and apples were found to have at least one of the pesticides.

The EWG says if consumers want to eat any of the Dirty Dozen they should buy organic. And the organization is suggesting that when buying organic produce is not an option, shoppers should choose conventional foods with lower pesticide residue. And there’s a list for that, too. It’s called the Clean Fifteen.

Children are of special concern as they’re more susceptible than adults to pesticides, according to the report. The Environmental Protection Agency was mandated by the federal Food Quality Protection Act of 1996 to enhance the regulation of pesticides and reduce the rate children are exposed to pesticides. And they did, mostly. Over the past two decades, a large portion of the most toxic pesticides have been withdrawn. But others, like organophosphate insecticides, are still used for agricultural purposes. Organophospate insecticides have been found to cause subtle but lasting damages to children’s brains and nervous systems, according to a 2011 study by the National Center for Biotechnology Information.

So what do you do with this information? The alternative to consuming conventional produce is consuming organic produce, or no produce at all. But a study by the Annals of Internal Medicine found little evidence to support health benefits from eating organic foods. The issue with studies on how what we eat influence our health is there are numerous other contributing influencers outside of the food we eat.

Whether these findings influence your consumption of the Dirty Dozen, washing your produce correctly is an easy, effective tactic. USA Today delved into a study on how to most effectively wash produce. They spoke with Randy Worobo, a food microbiology professor at Cornell University, and Linda J. Harris, chair of the food science and technology department at University of California-Davis. Their study found that 90 percent of remaining pathogens on fruits and vegetables are removed after rubbing under tap water and then drying with a clean paper towel. The tandem act of rinsing, rubbing and drying work best to remove bacteria.

Here is the full list of both the dirty and the clean: