Watch: Speaking at Delaware State University, Biden blasted Republicans in Congress for criticizing student loan relief when some of them have had millions of dollars in pandemic relief loans forgiven.

WASHINGTON - President Joe Biden’s plan to provide up to $20,000 in federal student loan forgiveness has been blocked by two federal courts, leaving millions of borrowers wondering what happens next. The administration plans to appeal.

Here's what to know if you've applied for relief:

While the application for relief has been taken down from the Federal Student Aid website, applications that have already been filed are on hold while the appeal works its way through the courts.

"Courts have issued orders blocking our student debt relief program," the Education Department said on its site. "As a result, at this time, we are not accepting applications. We are seeking to overturn those orders."

A federal judge in Texas ruled that the plan overstepped the White House's authority. Before that, a federal appeals court in St. Louis put the plan on temporary hold while it considers a challenge from six Republican-led states.

Still, advocates believe the administration will succeed in court.

Experts say student loan forgiveness has the potential to end up before the Supreme Court, meaning this could be a lengthy process. 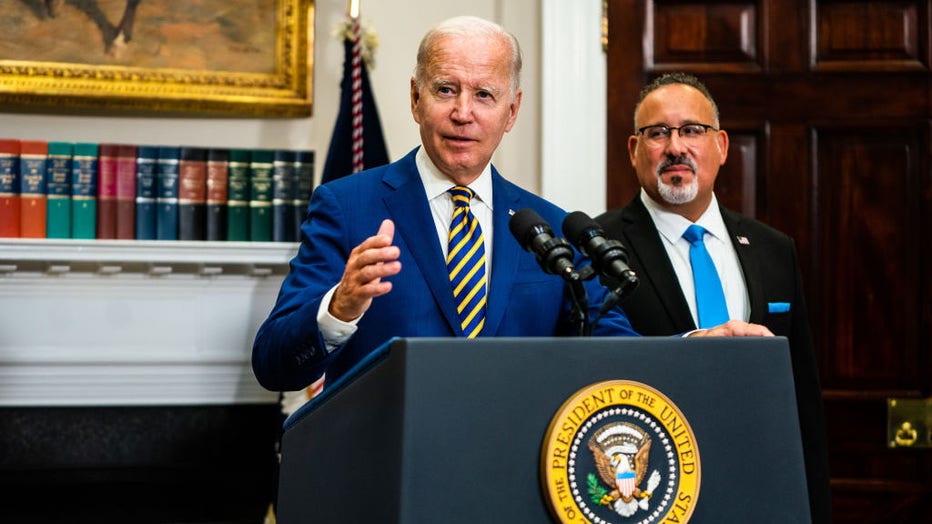 When do student loan payments resume?

Most people with student loan debt have not been required to make payments during the coronavirus pandemic, but payments are set to resume, along with the accrual of interest, in January.

Biden previously said the payment pause will not be extended again, but that was before the courts halted his plan. He's now facing mounting pressure to continue the pause while the legal challenges to the program play out.

What if I already applied for relief?

More than 26 million people applied for cancellation over the course of less than a month, according to the Education Department. If you're one of them, there's nothing more you need to do right now.

About 16 million people already had their applications approved, according to the Biden administration. Yet because of court actions, none of the relief has actually been delivered.

The Education Department will "quickly process their relief once we prevail in court," White House Press Secretary Karine Jean-Pierre said.

What if I haven't yet applied for relief?

For those who have not yet applied, the application for debt cancellation is no longer online. But there are still steps people can take to make sure their debt is canceled, should the appeal be successful, according to Welbeck.

"People should still check their eligibility," she said. "As news changes, people should look out for updates from the Department of Education."

Who qualifies, should the appeal succeed?

The debt forgiveness plan announced in August would cancel $10,000 in student loan debt for those making less than $125,000 or households with less than $250,000 in income. Pell Grant recipients, who typically demonstrate more financial need, would get an additional $10,000 in debt forgiven, for a total of $20,000.

Borrowers qualify if their loans were disbursed before July 1.

About 43 million student loan borrowers are eligible for some debt forgiveness, with 20 million who could have their debt erased entirely, according to the administration.

Are there other pathways to cancellation?

For those who have worked for a government agency or a nonprofit organization, the Public Service Loan Forgiveness program offers cancellation after 10 years of regular payments, and some income-driven repayment plans cancel the remainder of a borrower's debt after 20 to 25 years, according to Welbeck.

What is the Public Service Loan Forgiveness program?

The Public Service Loan Forgiveness program began in 2007 as a reward for college students who go into public service but has been criticized for its complex requirements in the past.

"Borrowers should make sure they're signed up for the best income-driven repayment plan possible," Welbeck said. In July, the administration will be reviewing and adjusting some of the accounts enrolled in these plans. You can find out more about those plans here.

Borrowers who have been defrauded by for-profit schools may also apply for borrower defense and receive relief on that account, Welbeck said.

Should I resume payments when the payment pause is lifted?

Advocates, including the Student Borrower Protection Center, are still urging the president to extend the pandemic-era payment freeze, arguing that students are entitled to the promised cancellation before the January repayment date arrives.

That said, Welbeck recommends logging on to your account, making sure you know who your servicer is, your due date, and whether you're enrolled in the best income-driven repayment plan, as you resume making payments.

The Student Borrower Protection Center is holding regular webinars on how to follow the changing policy in the coming months. You can sign up for those here.

If your budget doesn't allow you to resume payments, it's important to know how to navigate the possibility of default and delinquency on a student loan. You can read more about those here. Both can hurt your credit rating, which would make you ineligible for additional aid.

If you’re in a short-term financial bind, you may qualify for a deferment or a forbearance. With either of these options, you can talk to your servicer about ways to temporarily suspend your payments. You can learn more about those options here.

What else should I know?

Watch out for scams and get information only from trusted sources such as the Federal Student Aid site of the Department of Education.

Is it possible the debt won't be cancelled?

Yes. The issue of debt forgiveness is now before the courts.

The administration is not saying whether or not it's exploring other options for canceling debt if it loses its appeals. But advocates point to other ways the debt might be forgiven, including through the Higher Education Act.

How do I prepare for student loan payments to restart?

Betsy Mayotte, President of the Institute of Student Loan Advisors, encourages people not to make any payments until the pause has ended.

"I’ve been telling people to pretend they’re paying their student loan, but to put it into an interest-bearing account for now if you're able," she said. "Then you’ve maintained the habit of making the payment, but earning a little bit of interest as well. There’s no reason to send that money to the student loans until the last minute of the zero percent interest rate."

Mayotte recommends that borrowers use the loan simulator tool at StudentAid.gov or the one on TISLA's website to find the repayment course that best fits their needs. Once you plug in your information, it tells you what your monthly payment would be under each available plan, as well as what the long-term costs amount to.

"I really want to emphasize the long-term," Mayotte said. "Oftentimes I see people who might be having a financial struggle. They'll find a lower monthly repayment option, and then, ‘Set it and forget it.’"

Mayotte encourages people to switch to higher payments if their financial situation stabilizes, so the loan doesn't end up costing more in the long run.

Other useful tips that can shave costs for borrowers:

— If you sign up for automatic payments, the servicer takes a quarter of a percent off your interest rate, according to Mayotte.

— Income-driven repayment plans aren't right for everyone. That said, if you know you will eventually qualify for forgiveness under the Public Service Loan Forgiveness Program, it makes sense to make the lowest monthly payments possible, as the remainder of your debt will be cancelled once that decade of payments is complete.

— Re-evaluate your monthly student loan repayment at tax time, when you already have all your financial information in front of you. "Can you afford to increase it? Or do you need to decrease it?" Mayotte said. "Always look at your long-term student loan management strategy."

— Break up payments into whatever ways work best for you, whether that means two installments during the month, so it’s not a large lump sum at the end or the beginning, or setting aside cash in envelopes for designated purposes.

"Even if it’s an extra $5 or $20 a month, that’s a good strategy," Mayotte said. "If they can afford to pay a little more per month — the more you pay and faster you pay, the less you’ll pay in the long run."

Mayotte gave one example of a borrower with debt from higher education in the six figures. She was recently married, and she and her husband and kids decided to save every five dollar bill in a cookie jar to go towards the loans.