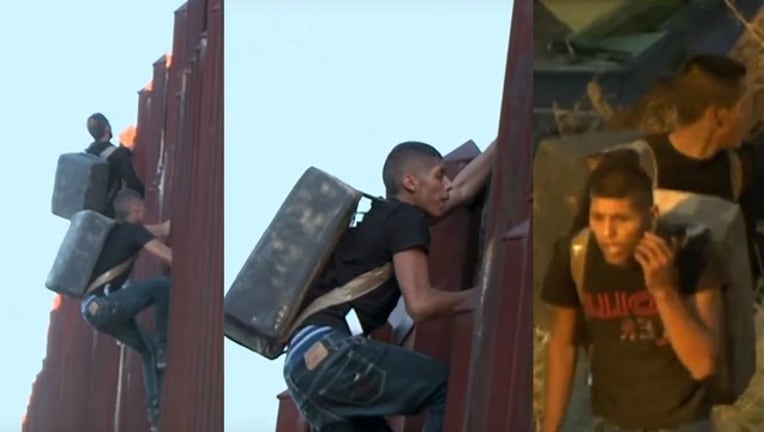 TUCSON, Ariz. (AP) — A Mexican journalist got some unusual footage when she spotted two suspected drug smugglers scaling a tall border fence from Mexico into the U.S. and then promptly climbing back after they realized they were being filmed.

Journalist Carolina Rocha of Azteca Noticias in Mexico City was in Nogales, Arizona, reporting on the U.S. Border Patrol's use of force March 16 when she spotted two young men in black t-shirts and jeans climbing down the fence in daylight. Footage shows them carrying large backpacks that were likely holding drugs, walking while hunched over and then hiding behind some bushes and talking on what appears to be a phone before realizing the camera was recording.

But Rocha was already rolling and not willing to stop. She told the men she was just doing her job. The cameras rolled for about three minutes before the men climbed back up the fence and returned to Mexico.

"It was shocking. This is happening in front of me? And we didn't' stop recording," Rocha said in Spanish during an interview with The Associated Press.

The scaling of the fence in broad daylight comes amid a 2016 White House contest in which border security has become a heated campaign issue. Republican front runner Donald Trump has repeatedly boasted that he will build a wall if elected, and two other candidates, Sens. Ted Cruz and Bernie Sanders, toured the border in the run-up to last week's Arizona primary.

Rocha said she was stunned at how quickly they scaled the fence, which is over 20 feet high. The men were gone within seconds.

She was also struck by the fact that there were three U.S. Border Patrol trucks within yards of the incident. No agents approached the men.

Border Patrol spokesman Mark Landess said it's not uncommon for smugglers to scale the steel fence, especially around Nogales, which is a busy drug smuggling corridor.

Landess said it's impossible to know why the agents didn't respond or whether they even saw the men.

"They might be waiting for something else to happen. There's no way to make an educated comment on that," Landess said.