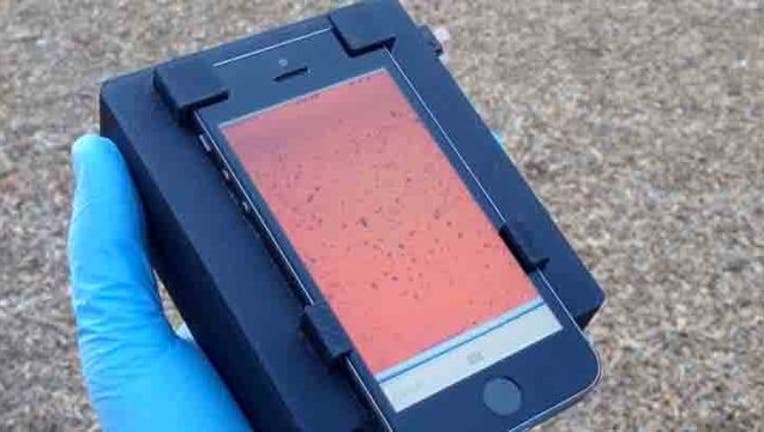 WASHINGTON (AP) — Prick a finger and have the blood checked for parasites — by smartphone? Scientists are turning those ubiquitous phones into microscopes and other medical tools that could help fight diseases in remote parts of the world.

In the newest work, University of California, Berkeley, researchers used a smartphone-run video microscope to target a challenge in parts of Central Africa — some devastating infections caused by tiny parasitic worms.

A small pilot study in Cameroon showed the device could measure within minutes certain worms wriggling in a finger-prick of blood, rapidly identifying who is a candidate for an important medication — and who's at risk for a severe side effect from that drug.

If larger studies pan out, the so-called "CellScope Loa" could help revive a program to eliminate diseases that cause blindness and disability in the region, the team reported Wednesday in the journal Science Translational Medicine.

Essentially, the instrument acted as a cheap, portable laboratory — no lab technician required — part of a trend in medical uses for smartphones that goes far beyond simple tasks like measuring heartbeats or emailing your doctor photos of a suspicious mole.

"This is a very important technology," said Baylor College of Medicine's Dr. Peter Hotez, a well-known specialist in neglected tropical diseases who wasn't involved in the new research.

"It's very practical," by eliminating the need for specially trained health workers and pricey equipment in remote villages, he added.

It's the latest in a string of attempts to harness smartphones as mini-labs. Columbia University scientists recently created a device powered by a smartphone to detect signs of HIV and syphilis in blood, pilot-testing the tool in clinics in Rwanda. At Massachusetts General Hospital, doctors are researching a tool that clips over a smartphone camera to detect cancer in blood or tissue samples. Hotez said still other researchers are using phone cameras to detect intestinal parasites in stool samples.

Wednesday's research targets a public health dilemma: A drug named ivermectin can fight two kinds of microscopic worms, spread to people through insect bites, that cause debilitating infections in much of Africa — river blindness and lymphatic filariasis, a disabling swelling. Mass campaigns to treat affected communities are underway in many areas.

But in certain parts of Central Africa, the treatment campaigns had to be suspended because some people also harbor a third worm, named Loa loa, that can trigger a potentially fatal neurologic reaction to the medication, said Dr. Thomas Nutman of the U.S. National Institutes of Health. For now, the only way to tell who's at risk requires manually testing blood samples, taking hours and specially trained workers that simply aren't available during mass treatment programs, added Nutman, who worked with the Berkeley team on a faster alternative.

The researchers created a handheld device that converts a smartphone into a video microscope and uses custom software to record and analyze movements in blood cells that signal worm larvae are wriggling, said UC-Berkeley bioengineer Dr. Daniel Fletcher, who led the work.

"We're using this phone not just as computer power or for its camera, but to run the test," Fletcher explained.

How it works: Squeeze a finger-prick of blood into a small tube and slide the tube into the 3-D printed base. Click the smartphone on top, its camera lined over the blood sample. Touch the screen to start an app and an image-processing system analyzes wriggling motions that are the size and shape to be of concern, and reports a count.

When used on 33 potentially infected people in Cameroon, the results were comparable to standard microscope testing, the researchers reported Wednesday. Next, Nutman said the team hopes to test the devices in a study of at least 30,000 people in Cameroon this summer. He estimates the devices could be manufactured for $50 to $100, not including the phone.

The work was funded by the Bill and Melinda Gates Foundation, NIH and other groups.